To stand out in the growing men’s wear category is no easy task, but these brands are doing just that. 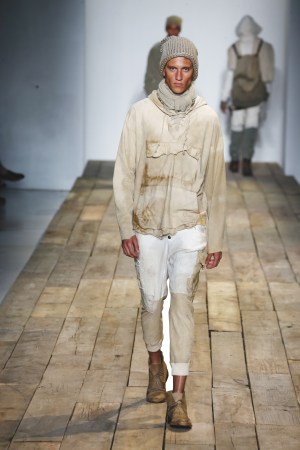 He has what can arguably be called the most famous last name in American fashion. But that doesn’t intimidate Greg Lauren.

“It’s a very powerful name and it’s impossible for me to meet anyone without them having preconceived notions, but it’s only part of me. It doesn’t define me,” he said.

His father is Jerry Lauren, the longtime executive vice president of men’s design for Ralph Lauren Corp., And, of course, Jerry’s brother is…Greg’s Uncle Ralph. So the provenance is impressive indeed.

But Greg Lauren is his own man, with design on his mind and art in his heart. And his apparel collection, which launched in 2011, is an extension and evolution of his paintings and paper sculptures.

“I never looked at it as making a jump into fashion,” he said. Instead, he paired the innate knowledge he acquired growing up in a fashion family with his artistic aesthetic.

What that translates into on the runway is a collection that uses repurposed fabrics such as vintage duffel bags, sailors’ uniforms and Army tents to create a military-inspired assortment of deconstructed suits, field jackets, trenchcoats and even a touch of tailored clothing.

Lauren grew up loving “vintage military everything….That led me to experiment and make a beautiful three-piece suit out of military duffel bags. I destroy it and make it unglamorous.”

His spring collection was intended to “create an epic men’s wear story,” he said, and offered up a Bedouin take on the season with 62 looks that ranged from a three-piece indigo striped suit to patterned ponchos.

While his label isn’t about to hang next to his uncle’s anytime soon, Lauren said he doesn’t really think of how his line will perform commercially as he’s designing.

“It’s part of my training as an artist. You put yourself out there and create work without thinking if people will like it.

Even so, the line has found a following. Lauren said it’s carried in 50 stores around the world including Maxfield, Dover Street Market and Barneys New York.

So while he noted that with his familial ties and the fact that he’s married to actress Elizabeth Berkley, there’s a “microscope focused more sharply on what I do,” he doesn’t really fret over that.

“I want the collection to speak for itself, offer my own artistic blend and speak to who Greg is,” he said. “If you put things out there that are authentic, then it’ll resonate.” — JEAN E. PALMIERI

Officine Générale owner and designer Pierre Mahéo followed in his family’s footsteps and started his career as a tailor in Paris before working at fashion houses in Paris and Italy. He launched his men’s wear line in 2012.

“My grandfather was a tailor, and had some stores,” Mahéo said. “I have always been surrounded by fabrics and clothes. I always knew I would launch my own brand; it was a necessity for me.”

Mahéo decided to start his own label, he said, because “I was losing passion in the previous company I was working for. The only way I could get it back was to put together what I had inside me, my own vision. Designing product I wanted to wear was key.”

He said he wanted to “bring back the focus on quality, work with the best material only, and be extremely conscious about country of origin for both fabrics and production.” His aesthetic is about “mixing tailoring, workwear and military, without any rules.” Fabrics come from Japan, England and Italy.

“It’s a subtle recipe; I have never been a fan of ‘overdesigned product,’” he noted. “You want to look and feel good in your clothes, while being a bit different, but not screaming, ‘Hey look at me.’ That’s why it works. It’s also a question of attitude.”

Officine Générale is sold in Barneys New York, Odin, Bergdorf Goodman and Nordstrom. Prices range from $260 for a shirt to $1,400 for a coat. — LORELEI MARFIL

After attending Jackson McKeehan’s trippy Boyswear presentation during New York Men’s Day, one can’t help but question what childhood was like for the designer.

“I grew up ankle-deep in rat poop,” said McKeehan, who worked on his family’s rodent farm in Missouri — hence the Boyswear rat logo. “I was always around art that was for everybody so I focus a lot of my work on kitsch.”

Kitsch certainly came through in McKeehan’s spring collection, which was titled “The Manson Family Singers.” The designer referenced the von Trapp family from “The Sound of Music” and the Charles Manson cult. This translated into an Instagram-friendly lineup of slick-haired models wearing culottes along with T-shirts and jackets covered in imaginative prints such as dancing goats and nuns traipsing through the Alps.

“The von Trapp family led me to think about the Manson family and I thought it would be really funny to merge the two,” McKeehan said. “I want people to smile when they see my work.”

Before breaking out on his own as a designer, McKeehan was a theater major and then went to the Fashion Institute of Technology to study men’s design.

When McKeehan is not designing his collection, he’s putting his real estate license to use and renting out apartments in Brooklyn. “[It] helps me pay my rent and pay for the line,” said the designer. — ARIA HUGHES

Before setting his sights on a career in fashion, Todd Lynn wanted to be an actor, which led him to work in the art department at various theater groups during high school, appearing on stage and creating costumes.

“I like that I can have an idea and create something from beginning to end. I can be very hands-on,” Lynn said. “I cut most of the patterns myself and am very involved in the dialogue with the factories in the make of the pieces. It’s artistic but practical.”

Working with musicians including Janet Jackson, U2 and Courtney Love, Lynn designed wardrobes for album covers, music videos and live performances. He also worked in Roland Mouret’s studio. His strategy paid off: “After making wardrobe pieces for various rock ’n’ roll stars, I was getting requests from the friends who wanted the same pieces,” said the Canadian designer, who studied for his M.A. in fashion under Louise Wilson at Central Saint Martins in London. “That’s when I thought I should expand the business — and the audience.”

Today, Lynn considers “rock ’n’ roll tailoring” to be his trademark. “Not in a cliché way,” he stressed. “I spent a lot of time working on cut. It’s a big part of what I do. It’s not really surface; it’s deeper than that. Leather jackets, tailored jackets, tailored trousers. I make clothes for people who like to make a bit of an effort when they get dressed. Leather, fur, structured tailoring. There is a darkness that exists in my work, but now it’s about finding a new ‘black.’” The designer is also moving away from his usually slim silhouettes, and experimenting with more oversize models, manipulating proportions to come up with new lines.

“My work is an amalgamation of everything that I am thinking and seeing,” Lynn said. “I also consider what I want to wear and what the people around me want to wear. Clothing isn’t art, but it should still be a snapshot of the world we live in at a moment in time.”

Lynn’s prices range from $250 for a T-shirt to $2,500 for a suit or a leather jacket. His line is sold at boutiques including H Lorenzo in Los Angeles and ODD in New York. — L.M.

Amid an industry of flamboyance and eccentricity, Lucio Vanotti is a quiet, discreet person, who prefers to let his designs do the talking.

After developing the “February” contemporary brand for nine years, the designer established his namesake line in 2012 with the goal of offering Made In Italy collections with a personal point of view.

According to Vanotti, “a constant sense of comfort” is the leitmotif of his creations, infused with a sense of effortless elegance.

Pure, graphic silhouettes and unexpected proportions are also key elements of the brand’s pieces, which are crafted from high-end fabrics enhancing the lightweight, relaxed feel of the collection.

Among the collection’s bestsellers, Vanotti listed the comfy, deconstructed double-breasted suits, the layered pants as well as the lightweight jackets made from shirt fabrics, worked in graphic patterns of polka dots and stripes.

“Rust was the most successful color, along with the more classic whites, blues and blacks,” Vanotti said, revealing that the brown tone he included in the collection turned out to be very difficult to sell in Asia.

Vanotti said he would like to focus more on the classic, sartorial part of his collections to propose a “new idea of tailoring.” The development of a full footwear range is also on his agenda.

“The sandals I designed for next spring were well-received and I think that there is good potential in this segment.” — ALESSANDRA TURRA