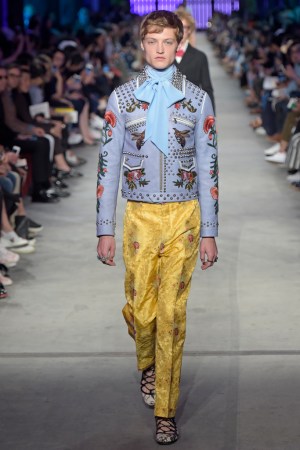 At the packed Dior Homme after party in the wee hours during the Paris Men’s Collections, straight models mingled with transgender men and women while gay models dressed in jeans and T-shirts rubbed shoulders with their straight counterparts — who were wearing skirts or dresses.

Confused? Well, if you are, just think how designers feel. As New York Fashion Week: Men’s gets set to begin on July 13, there are conflicting cyclones whirling through the world of men’s wear — and designers are struggling to figure out which wind to catch. One part of the market remains centered on what has become men’s wear tradition — suits, jackets, pants and sportswear that are firmly masculine — while the other is pushing the boundaries of what modern men’s wear is all about, mixing skirts in with pants, adding lace or other embellishments that in the past would have been considered feminine, and often times putting both sexes on their runways so observers don’t know which is which.

On the one hand, the New Dandy Man is not exactly new — think the New Romantics of the early Eighties, Michael Jackson, David Bowie or Keith Richards — or, going back further in time, Oscar Wilde, Beau Brummel, or Louis XVI. But the current trend is only part of an overall vibe coursing throughout modern life — Bruce Jenner is now Caitlyn Jenner; the Supreme Court approves gay marriage, and the younger generation is much less focused on firm sexual identity than their older siblings or parents. To them, male and female are not definitions of identity — we are all simply humans.

Alessandro Michele, creative director of Gucci whose men’s wear show last January added fuel to the latest fire of dandyism and androgyny, said his gender blurring isn’t something he is imposing, but rather a reflection of today’s young generations, just as they are “connected to nature,” which explained the exotic and rare birds, animals and flowers embroidered all over the clothes in his men’s spring 2016 collection. “Dress can give you the opportunity to express exactly who you want to be,” he said.

But even as dandyism and androgyny were all over the European men’s runways for spring, there were two definite camps. Kris Van Assche at Dior Homme and Olivier Rousteing at Balmain firmly nixed any idea of jumping on the trend, with Rousteing telling WWD, “I think a guy should look like a guy” — albeit, in his show, one who wears heavily gold-embroidered safari jackets.

That division is likely to play out during the New York men’s shows as well. Long known for creating collections centered on sportswear and streetwear — with a distinctively preppy twist — American designers admit they are aware of the New Dandy Man trend coming out of Europe. Some are joining it, while others insist it is just a fad — and one that isn’t that commercial.

“There’s a bit of British-dandy-meets-Seventies- SoCal in my spring 2016 collection,” said John Varvatos, whose inspiration always comes from the music world and whose signature style has long been based on a dandy-esque rock ’n’ roller. “From 1973 to 1975, bands like Fleetwood Mac and The Rolling Stones spent a lot of time in Los Angeles’ Laurel Canyon and really brought in their influences. There’s definitely a Keith Richards vibe in parts of the collection.”

Alan Eckstein, design director and cofounder of Timo Weiland, pointed to that other British rock icon and poster boy for dandyism and androgyny — Bowie — as inspiration. “He is beautiful and bizarre and has a unique way of putting looks together. He wears a great deal of color and geometrics and graphic prints — all of which will be present in our spring 2016 collection,” said Eckstein.

American designers such as Alexandre Plokhov and Duckie Brown have long mixed feminine elements into their men’s wear, and will do so again for spring 2016. Duckie Brown founders Daniel Silver and Steven Cox call their style “andro-gene.” They agree with Michele that the youth of today aren’t about focusing on “male” versus “female” stereotypes but are “much more about not declaring one or the other; they’re just hanging.”

Many designers see dandyism centered more in the types of fabrics being used and in the embellishments than in androgyny, which is what European brands such as Versace and Bottega Veneta are doing for spring. Michael Maccari, creative director of Perry Ellis, said he is using fabrics traditionally considered more feminine, like silk in shirts — which follows on from the pajama trend — sheer shirts, burnouts and other styles seen in men’s wear the last few seasons. “It seems retro, but we saw this in the Nineties with printed silk tops and flowy fabrics and it’s been on the periphery all the time,” he said. “It’s been more or less important over the years. I’m excited about the trend because we’ve been so buttoned-up and body-conscious in men’s lately and using other fabrics will make it interesting.”

David Hart agreed, pointing to guys like Nick Waterhouse and Leon Bridges as dandies because of their nostalgic way of dressing. “I think we will definitely see more elements of dandyism than we’ve seen in the past,” said Hart of the New York collections. “I think we will see more in terms of hats, pockets squares, ties and accessories.” Hart himself looked to the Bauhaus movement during the Thirties for inspiration, including artists such as László Moholy-Nagy, Marcel Breuer, Franz Ehrlich, Lyonel Feininger and Johannes Itten, “all of whom could have been considered dandies of the era.”

But while some U.S. designers are injecting elements of the dandy into their spring collections, others are firmly against the trend. In their view, it’s un-American — if not uncommercial.

“It’s interesting what’s happening in Europe; it’s very directional, but you won’t see a lot of men wearing it,” said Todd Snyder. “A few of theEuropean shows I’ve seen look like art installations. I’m sure in New York we will see a continued influence of activewear. I am focused on a softer, minimal style this season — you won’t see any dresses.”

Shimon Ovadia of Ovadia & Sons agreed, saying, “Let’s be real — most guys aren’t wearing the fashion-forward looks you see on the runway. New York is confident, cool, sharp, sporty and tailored mixed into one. As New Yorkers, this season is all about the city. We’re bringing the energy and coolness of New York to our clothing.”

While American men have become more fashion- conscious and aware, the question in the end is how far they are willing to push the edge of the envelope. It’s fine to wear slimmer suits, add a pocket square à la Don Draper and inject more color; it’s another to don a lace-trimmed shirt or even throw a skirt over a pair of pants, as many European men are willing to do. That’s not what American fashion is about, designers say.

“New York and America have a narrow history of fashion and when you look at the history, sportswear comes to mind. But in the last couple of seasons, it’s been sportswear mixed with street and luxe. That could and should be part of America’s strength,” said Robert Geller.

“We’re part of the group of designers who have clothes you can wear every day and are a little more practical,” said Michael Bastian who, ironically, will show a capsule collection of women’s wear based on his men’s designs. “It comes from our Yankee mentality.”

And, in his view, it’s nothing American designers should be afraid to offer. “That’s our specialty and there’s nothing to be ashamed of,” Bastian added of American practicality. “Somebody has to do it, and that’s us.”