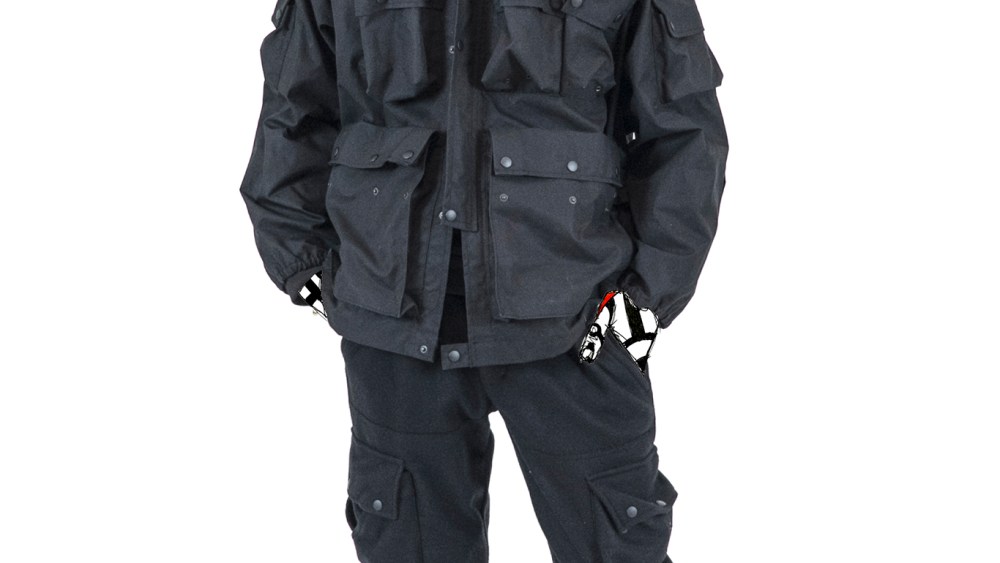 There was really no other path to take than fashion for Alejandro Gómez Palomo.

Growing up in Córdoba in the south of Spain, Palomo would eagerly search out the latest looks from Galliano and Yves Saint Laurent and then set out to create his own versions in doll’s dresses.

“I was sketching and playing with fabrics all day so my parents said I should be a fashion designer,” he said.

So at the tender age of 17, he set off to the U.K. and enrolled in the London College of Fashion where he studied men’s wear. He chose that discipline because he felt it was more “organic” to him than women’s wear and “I understood what I wanted and what my friends wanted.”

His graduation project in 2015 gained some attention and was the start of Palomo Spain. Within a few months, he had created Orlando, his first official collection that he presented in Madrid and Moscow last February. Orlando is based on Virginia Woolf’s book of the same name that is a story of a male nobleman hero during the reign of Elizabeth I who becomes a woman in his 30s and lives another 300 years without aging.

So it’s no surprise that Palomo’s take on the book was an androgynous assortment complete with baby blue tuxedo, pink flared pants, ruffled skirts and embroidered pinstripe suits.

He is partial to vintage fabrics — many of which were originally used for women’s wear — that he reworks for his men’s collection.

The line was manufactured in Palomo’s hometown of Posadas, Spain, and wound up being picked up by Opening Ceremony in its first season. It will be added to the mix in K3 in Tokyo and Osaka for spring.

Although he was starting to gain some attention, Palomo was looking for ways to raise his profile. “No one was really aware of who I was,” he said. Then he received a call from the CFDA, which offered him the opportunity to show at New York Fashion Week: Men’s.

“I’ve always wanted to go really far with fashion,” he said, “instead of just doing things for myself.”

By showing at Cadillac House in New York on Feb. 2 he hopes to attract attention from retailers and customers around the world.

For his fall line, he will move a bit away from the highly romantic aesthetic of the past and show a little more skin. “I’ve been told my clothes are very romantic,” he said, “but after seeing how boys behave on Instagram, I’m showing more of the power of sexual energy — something I haven’t explored before.”

He admitted that being showcased on a stage this big is “very nerve-wracking and overwhelming, but it’s my ultimate desire,” he said. “I want to be taken seriously.”

She was born Maria Kazakova, but has chosen to use Maria Jahnkoy as her professional moniker. Her willingness to change her name to match her collection is indicative of her personality — when she commits to something, she’s all in.

Jahnkoy was born in Siberia and started her exploration of fashion by creating women’s wear in Moscow. She holds degrees from the New School’s Parsons School of Design, where she received a MFA in fashion design and society. She also has a BFA in fashion design from the British Higher School of Art and Design in Moscow and a graduate diploma in fashion from Central Saint Martins in London. She now lives in Crown Heights, Brooklyn, where she has a studio.

But her interests cover more than fashion. She is also passionate about the craftsmanship found in indigenous cultures around the world.

With that as the backdrop, Jahnkoy, which means “New Spirit Village” in Crimean Tatar language, set out to revive these often-lost arts when creating her graduate collection for Parsons.

As she writes in her brand statement: “Due to social and economic pressures, diverse cultures of the world are slowly disappearing. New generations…grow distant of ancestral knowledge and see ethnic dress as worthless and obsolete. Communities and countries with a rich heritage of craftsmanship are now flooded with counterfeits of famous brands and ‘donations’ of second-hand, fast-fashion clothing from the West.”

To address this issue, Jahnkoy created a collection she named The Displaced that repurposes such products of “excessive consumption and waste” and blends them with the crafts of yesteryear. The result is a line of street-inspired men’s wear where traditional African beading adorns shirts with sleeves made from basketball shorts.

Her collection was sponsored by Puma, whose jumping cat logo is prevalent in the line, along with Swarovski, whose crystals embellish several of the pieces.

Because of their intricacy, the debut collection took over a year to make. The line was initially shown at Parsons’ graduate fashion show last year and Jahnkoy has created another seven pieces especially for her New York Fashion Week: Men’s debut on Jan. 31 at Skylight Clarkson North.

And they’re not cheap. Each of the one-of-a-kind pieces, which are more like art than clothing, cost $5,000 to $25,000 and can take up to 250 hours to complete. But Jahnkoy hopes to eventually offer a more-commercially viable collection.

However, don’t expect to see Jahnkoy in Macy’s. “I would like to work as a couture brand selling one-offs and work with artisans to showcase their craftsmanship and uplift the world view,” she said. “And also open schools to teach craftsmanship in New York and Africa.”

Chavarria, who has held design stints at Ralph Lauren and American Eagle Outfitters, previously headed Palmer Trading Company, his Made in the U.S. men’s wear line that leaned heavily toward workwear and was snapped up by Japanese retailers. But now he’s exclusively focused on Willy Chavarria, a premium assortment of men’s wear he’s produced for two seasons and will present for the first time at NYFW: Men’s on Feb. 2 at Skylight Clarkson North.

According to Chavarria, this new brand, which has taken over his 16-year-old Palmer Trading Company store in SoHo — the space has been swiped clean of the vintage Americana collectibles it once sold — features the Cholo, streetwear and Japanese references that always pop up in his designs, but it has a bigger purpose.

“We wanted to do something that had a strong, positive messaging behind it and we wanted the clothes to be a part of that,” said Chavarria, who is Mexican-American and grew up in Huron, Calif., a small town near Fresno. “So the concept is very much about feeling good, being relaxed and being accessible to different types of people.”

Oftentimes, being democratic in the fashion world shows up through pricing or a diverse set of models, but Chavarria is building accessibility into every facet of his brand. The clothes, which are produced in Peru, Turkey and Europe, are welcoming, soft to the touch and oversize with subtle pleats, pins and tucks that completely transform basic T-shirts, knits, chinos and coats. The prices range from $110 to around $1,000 — in the future Chavarria hopes to produce more pieces at a lower price that can be sold at local skate shops. And all of his models are non-models he finds on the street who represent a variety of marginalized groups.

“It’s really about the beauty that emerges from the people who have experienced oppression,” Chavarria said.

To further underscore this message, for fall he’s continuing his collaboration with the Los Angeles-based active line Brandblack on a capsule of pieces with inclusive messaging. For example, “Race” and “Gender” are embroidered on turtlenecks and above pockets. His main line, which is titled “Harder” — Chavarria believes now is the time to fight harder, love harder and be harder — shows him exploring sports team uniforms and working with leather for the first time. Chavarria’s vision has resonated with retailers including Barneys New York, Steven Alan and Isetan who have picked up his line amidst a risk-averse retail environment.

“I think that everyone is desperately looking for what’s going to work,” Chavarria said. “There’s a very small window for something new and we’ve been very fortunate to be welcomed into that window.”

What do streetwear fans wear once they grow up?

Vincent Oshin and William Watson are hoping to answer that question. Their men’s wear line, Death to Tennis, has chugged along quietly for the past five years but gained the attention of retailers including Opening Ceremony, American Rag, Gentry and Ron Herman, which all stock the collection.

“There is a huge streetwear market, but everybody in that market is 10 years old,” Watson said. “There’s a certain aesthetic that has been going on for years, so we are making it more mature. You won’t get turned away at the club because you are wearing our clothes. We aren’t telling streetwear to grow up, we are just presenting the same silhouettes in an older way.”

Death to Tennis — the designers say “tennis” represents whoever or whatever individuals want to protest against — started with three core products, which still exist in the line today, and has expanded to include non-stuffy tailored clothes, graphic T-shirts illustrated by Watson, a range of oversize denim and outerwear. Embroidery is a signature of the brand, which decorates the back of knits and jackets with logo or intricate graphics. The collection is made in Japan, Peru and Los Angeles and retails from $300 to $900. Their fall collection, which they will present on Feb. 1 at Le Bain, draws from America’s continuing struggle with sexual rights and will show rich jewel-tone colors and utilitarian silhouettes.

The duo met in 2011 and worked together for a year before realizing they were from the same town in the north of London. Watson who previously designed for brands including Moschino, Fila and Umbro, and Oshin, who used to be a music journalist and celebrity stylist, met through friends, shared cultural interests and a dry English sensibility so they decided to work together.

They’ve been able to appeal to a broad scope of customers ranging from celebrities such as up-and-coming rapper Mick Jenkins to the Oscar-nominated actor Mahershala Ali, who appeared in the brand’s fall 2016 short film.

Watson said the goal now is to expand distribution but also focus on their own e-commerce site, which will relaunch during NYFW: Men’s, and evade the mistakes they’ve seen other brands make, particularly streetwear brands who are flooding the market with collaborative product.

“There is so much physical product out there,” Watson said. “We want to do collaborations, but it has to be the right one and there has to be a reason for the product. We want longevity as a brand, so to get there you really need to pick and choose who you work with.”