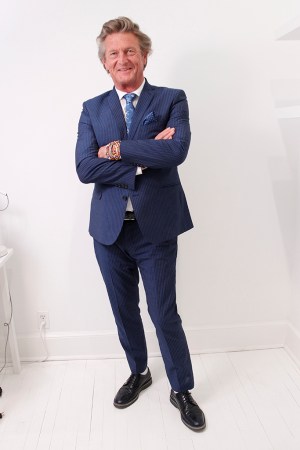 Nick Graham has been in the men’s wear business for more than two decades, but it took until now for him to jump into tailored clothing.

Fueled by last year’s investment by Iconix Brand Group, Graham has created a collection of suit separates and formalwear that will be unveiled during his presentation at NYFW: Men’s today.

At the end of 2013, Graham, the irreverent designer and founder of Joe Boxer, launched a dress shirt and neckwear brand under his own name. The clothing will complement that line, which is sold in Macy’s and Lord & Taylor, and will be targeted to midtier department stores with price points of $250 for a jacket, $150 for pants and $395 for a full suit. Dress shirts retail for $59, or $69.50 for a shirt and tie merchandised together.

“This is the younger child of Ralph Lauren and Paul Smith,” Graham told WWD at a preview at his Manhattan office overlooking Bryant Park, “but for the main floor. I think there’s a big opportunity here and globally.”

The line is being manufactured by Lanier, a division of Oxford Industries Inc., and Graham describes its aesthetic as “post-prep.” It’s “more eccentric” than much of the tailored clothing on the market, he believes, and includes florals, stripes, paisleys, checks, seersuckers and other “traditional” men’s wear fabrics and patterns offered up in a nontraditional way. For instance, a shadow stripe suit is shown with a polka dot pocket square and paisley shirt.

The line will include 60 swatches and there will be two fits. “Our niche is to give the younger consumer value with European styling and influence.” The New York cut will be slim but not skinny, Graham said, and will be targeted to the guy seeking a “modern fit.” The Everywhere Cut is more relaxed.

In keeping with Graham’s sense of humor, the company will offer a “shacket,” which is an unlined shirt-jacket, as well as a “shant,” which are pants made of shirting fabrics such as ginghams. The label reads: New York, London, Everywhere.

Graham said he views Tommy Hilfiger, Calvin Klein, Kenneth Cole and others at this tier as competition, “but this has more sensibility and character,” he said. “It’s got a main floor sensibility but with a little more edge. I think American guys are ready to take that step.”