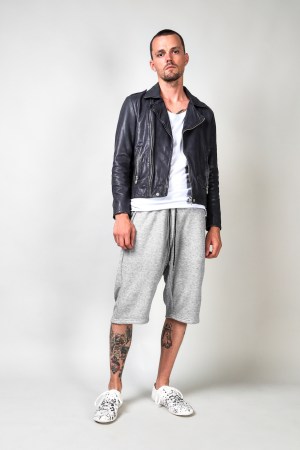 Louis Terline and Jeff Madalena have a clear vision of what they need to do to reintroduce Oak to the market. “We are dedicated to reestablishing trust and delivering a quality product that we can be proud of,” Terline said.

The founders, who opened the first Oak store in Williamsburg, Brooklyn, in 2005, and subsequently added units in other locations around New York City, as well as Los Angeles, was purchased by American Apparel in 2013. Oak also had a wholesale division that was put on hold during the previous ownership.

In an interview prior to the brand’s spring presentation Monday at New York Fashion Week: Men’s, the duo admitted that once American Apparel founder Dov Charney left the company, things went south pretty quickly for them.

They said Charney was the reason they decided to sell their business. “We just clicked and had the same beliefs on what a fashion business could be,” Terline said. Madalena said that Oak was able to triple its top-line growth within a year under American Apparel, but the company soon spiraled into bankruptcy, taking Oak with it.

Although they said the situation “couldn’t have been less pleasant,” it also afforded them the opportunity to reacquire their business during the bankruptcy proceedings. “We got a business degree you couldn’t buy,” Terline said. “We’re still reeling from the trauma.”

But the founders are putting that behind them and looking to the future.

Oak still operates two stores in New York and two in Los Angeles, and the presentation during NYFW: Men’s marks its return to wholesale. “We’re going back to our roots and the core strengths that we may have lost sight of,” Terline said. “It’s actually liberating to start again.”

The spring collection, which is inspired by “artists, not art,” according to Terline, offers Oak’s unique take on basics. T-shirts, casual pants, sweatshirts and golf jackets are all part of the mix. But the looks are unisex — “We were early adopters [of the genderless movement],” Madalena said — and the proportions have all been tweaked. “We added a lot of color to lighten things up, and we have a lot of new shapes.”

For instance, Oak is offering shorter shorts this time, moving away from its longer, looser styles. T-shirts are oversize, but with seams that make them look trendy rather than sloppy. Ease of wear is evident through the collection, with its cropped pants, zipper closures and easy washed sweatshirt fabrics. There are jeans that resemble painters’ pants, a vintage-inspired golf jacket infused with biker details and even a simple black swim trunk, which is nearly impossible to find in the market, Terline said.

Now that they’re back on their own, what’s the long-term plan for Oak? “We have no long-term plan,” Terline said. “We’re just going to focus on what we have now and [on] getting back to where we were.”