The curator’s new exhibition at the Museum of Fashion and Costume at the Palazzo Pitti marks the 30th anniversary of Pitti Immagine Uomo.

A view of Olivier Saillard's new exhibition in Florence.

FLORENCE — “For museums, it’s easier to present an evening dress from the Fifties by a house like Balenciaga or Dior, but it’s not so easy to provoke a dream with a gray costume,” said Olivier Saillard.

For his latest exhibition — titled “A Short Novel on Men’s Fashion, Thirty Years at Pitti Immagine Uomo” and produced in collaboration with the Fondazione Pitti Imagine Discovery to mark the 30th anniversary of Pitti Immagine Uomo — he set himself the challenge of curating a show based on how men actually dress. “I looked at the [museum’s] collection, evening dresses by Dior, Balenciaga, Vionnet, and finally I realized, we don’t have any jeans, T-shirts — ordinary clothes which are also poetic,” he said a preview of the exhibition on Tuesday. 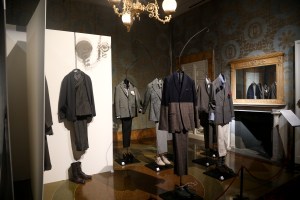 Lived-in looking ensembles are presented on wire clothes valets throughout a series of rooms at the Museum of Fashion and Costume at the Palazzo Pitti, arranged in groups united by forms, colors and shapes with fun details like scarves and shoelaces suspended in movement, as if lifted by a sudden gust of wind. The ensembles — spanning smart-casual, eveningwear, historical costume, streetwear and sportswear silhouettes, including denim — dialogue with portraits of men on loan from Florence’s Gallery of Modern Art, as well as excerpts of texts by writers including Antonio Mancinelli and Serena Tibaldi, with giant white books used as props. 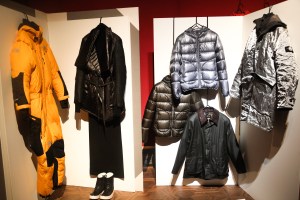 Saillard said that while preparing the exhibition he set about persuading houses and designers to donate pieces to Pitti Immagine Discovery Foundation’s permanent collection of men’s wear pieces, building — with the help of around 150 brands and designers who have shown at the fair over the years, including Rick Owens, Raf Simons, Thom Browne and Valentino — what for him represents “the most important collection devoted to contemporary men’s fashion.” The institution has already pledged to donate them to the Museum of Fashion and Costume, as reported.

Ever the gentleman, Nino Cerruti contributed a complete ensemble from his personal wardrobe for the show: an orange paisley jacket from the Seventies, a shirt, trousers, socks and sneakers.

“For me, he’s the new dandy. He’s very important for fashion, he trained Giorgio Armani, Véronique Nichanian from Hermès…a lot of designers started in men’s fashion with Nino,” Saillard said. The seasoned fashion historian, who served as director of Paris’ Palais Galliera from 2010 to January 2018 and is also artistic director of footwear label J.M. Weston, has previously developed several projects in collaboration with Pitti Immagine, including the “Dressing Like a Man” exhibition in 2011 and the “The Ephemeral Museum of Fashion,” a poetic show hosted in 2017 at the Costume Gallery of Palazzo Pitti. But from across his entire career, the number of men’s exhibitions he’s staged to date totals three, versus 150 devoted to women’s wear.

Saillard dedicated the new exhibition to Marco Rivetti, the former president of Pitti Uomo. “He was convinced since the beginning that Pitti Uomo had to create a close relationship between culture and men’s fashion, to celebrate men’s fashion in different venues around Florence,” he said.