Ones to Watch at New York Fashion Week: Men’s

Some key brands to check out at the upcoming New York trade shows. 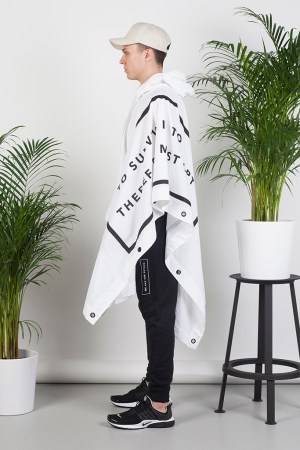 “We have a big fan base in the U.S. and it’s our biggest market outside of the U.K.,” said Matthew Moore, a former freelance designer who created the label in 2012 with Ash Fricker, a men’s wear designer, and Alpha Badio, who handles social media for the line. “We deal with a few stores in the U.S. but not too many, so it seemed like a natural progression for us to do the show.”

ADYN, which is currently sold at stores such as Harvey Nichols in London, Samplas in Korea and Restoration in Japan, is known for its Gothic streetwear looks, but Moore said the spring collection represents a departure. “We are pushing away from streetwear and pushing more into contemporary. We feel like the streetwear market has become so saturated and we’re also maturing as a brand,” said Moore.

The collection, which is named Adapt, will include an oversize poncho, lightweight running pants, a new graphic print and basics such as long T-shirts and leggings for layering. Jackets start at $75, joggers are $145, T-shirts are $100 and sweatshirts are $200.

Getting hit by a car while riding his bike in New York City inspired Mike Cherman to start ICNY in 2012.

“I started making socks with reflective polka dots for myself. I didn’t want to get into any more accidents,” said Cherman, who was a graphic designer at Nike before creating the line.

The sportswear brand’s assortment now includes tops, bottoms, hats and outerwear that are all decorated with reflective material. Cherman also collaborated with Puma on a reflective red sneaker for Valentine’s Day that was released earlier this year. Stores ranging from Colette to Pacific Sunwear have picked up the line.

“I used to believe that if you were in PacSun or Urban Outfitters then you would never be in Opening Ceremony or Colette, but the line has been able to live across different markets and be cool while still being functional,” said Cherman, who added that the collection sits between the active and lifestyle categories.

After two seasons of showing at Liberty Fairs, Cherman is joining the Agenda exhibitor list to present his spring 2016 collection. Cherman said the move puts him closer to more sportswear brands.

The collection will showcase a fully reflective jacket, pants made from a lightweight ripstop fisherman fabric, space-dyed T-shirts, and a jacket with hot foil-stamped lining that keeps wearers dry and warm. The line retails from $18 for socks to $150 for outerwear. — ARIA HUGHES

For the founders of the California-based Apolis brand, there’s more to life than just selling clothes. The primary mission of the “socially motivated lifestyle brand,” whose name means “global citizen,” is to help create social change.

Apolis was founded in 2007 by brothers Raan and Shea Parton with the idea of bridging commerce and economic development. What that translates to is a collection of casual sportswear and accessories manufactured in Uganda, Peru and Bangladesh, in addition to the company’s backyard in Los Angeles.

“We’re not necessarily fashion guys,” said Raan Parton, creative director. “But Apolis is very essentials-driven. Our customer is looking for fewer, better things so we strive to offer the best T-shirts, the best pants, the best jackets.”

In order to remain true to its mission, the collection is kept tight. “We make less money, which is probably not the best business plan, but it’s part of our social enterprise.”

The brand will be showing at The Tents @ Project and will offer base layers in merino wool and unlined blazers in a hopsack fabric in addition to its core T-shirts, polos and henleys. There will also be some welded outerwear and lightweight quilted jackets.

Parton said the brand currently has 350 wholesale accounts but 60 percent of its business comes from its own Web site.

Although it has shown its collection at the trade show in Las Vegas, this will mark the first time the brand is being shown at the Project show in New York. — JEAN E. PALMIERI

It’s been a whirlwind five-and-a-half years for Paul Trible and Paul Watson and their start-up shirt company, Ledbury. After spending “years obsessing over cuffs, collars, buttons and fabrics,” the company launched in Richmond, Va., in 2009 as strictly a direct-to-consumer shirt business. Since then, it has attracted 30,000 customers, Trible said.

Shirts are offered in two fits: classic and slim. Fabrics are sourced in Europe, where the shirts are also manufactured. The shirts also offer subtle nuances such as a lowered second button to create a “V” at the neckline that prevents them from being buttoned too high or too low, and a canvas interlining on the collar to help them stand up under a sweater or sport coat.

Although shirts remain the hallmark of the business, Ledbury has since branched out into several other categories including blazers, sweaters, polos, pants and accessories.

Now the brand is pushing into wholesale.

Trible said Ledbury is currently being tested at Nordstrom, Oak Hall, Beecroft & Bull and Trunk Club where they are “doing really well,” so he and Watson decided to try the trade show route, taking a booth at the MRket show.

At the show, he said Ledbury will focus exclusively on its shirts. For spring, the collection will include a fashion assortment with around 70 styles that range from “supercasual linens to Italian dress shirt fabrics,” Trible said, and will include shots of color and innovative patterns.

The brand will also show some 30 basics from its stock replenishment program as well as its made-to-measure offering.

Among the fabrics that will be offered for spring are lightweight chambrays, linens and cotton-linen blends. Key models include a white seersucker with a small navy polka dot and a bright plaid linen.

Retail prices for the ready-to-wear collection range from $145 to $165, Trible said.

The goal of bringing the line to MRket, he said, is to further expand its reach. “We don’t want to be in 500 stores, but we want to be in 50 great stores,” he said. “And we think we can help drive young, affluent guys into those shops.” — JEAN E. PALMIERI

The Arkansas native spent his 20s working in St. Louis as a probation officer before sending his portfolio to the School of the Art Institute of Chicago in 2012. After graduating in 2013, he spent six months at Thom Browne as a full-time intern and freelanced for other brands before creating Moment Homme, the men’s wear line he is launching at Liberty Fairs.

“I went from taking ankle bracelets off of 13-year-olds to designing for runways within three years,” said Taylor.

“I wanted to tackle what the modern-day guy wants to wear,” said Taylor, who added that he’s focusing on special outerwear pieces for spring.

Taylor, who is calling the line loosely tailored, will show a bomber jacket made from Italian suede, fitted cardigans made in Italy, denim made in Japan, classic men’s shirts and cropped trousers. The collection is sprinkled with special details including a laser cut number 79 — the cosmic number for gold — that is placed on waistbands and shirt sleeves, along with functional belt loops with horn buttons.

“I felt like in men’s wear we abandoned belt loops,” said Taylor.

The Nasserbakht family has been producing custom shirts for more than a century so the skills of choosing the finest fabrics, cutting patterns and sewing shirts run deep within their veins. With that as a backdrop, the Nasserbakhts opened a boutique on Elizabeth Street in New York in 2010 called The Sock Hop, where they personally cut and sew custom shirts at the back of the store. The small store also sells socks, accessories and hard goods from other craftsmen from around the world.

“My dad was born in Tehran and learned the business from his dad,” said Vincent Nasserbakht, the third generation of the family to operate the business. “He taught my brother and me.”

But it was the third generation that decided to take the plunge and branch out beyond custom shirts.

“We basically have two businesses now,” said Nasserbakht, “custom and ready-to-wear.” He described the rtw collection, which launched three seasons ago, as “elevated casualwear.” Among the pieces that will be offered for spring are shirts in lightweight Japanese denim and French linen with single-needle construction, as well as a shirt-jacket.

“We cut everything here,” he said, pointing to the cramped area behind the cash register at The Sock Hop store. The garments are then produced in small factories in New York City’s garment district.

The prices for the rtw collection are $180 for shirts and $225 for the shirt-jacket, which is designed to layer over a T-shirt. The company’s custom shirts start at around $300.

Nasserbakht said what sets The Sock Hop’s shirts apart from others in the market is the styling. For instance, collars are smaller and the backs of the shirts are cut tighter than the front to improve the drape. Details are also important, he said, pointing to the tortoise shell buttons on a white oxford shirt.

The spring rtw collection, which is labeled Shirting by The Sock Hop, will be shown at the Capsule show. — JEAN E. PALMIERI

The team behind men’s wear brand Second Layer is bringing an elevated touch to the Southern California aesthetic.

“Our whole concept is tailor-made daily wear,” said cofounder Joshua Willis. “We are not trying to do something that’s surf or skate or street, but inherently it is in the collection because that’s who we are.”

The Los Angeles-based brand, which is stocked in retailers including H. Lorenzo and Isetan, will present during Capsule’s slot at the inaugural New York Fashion Week: Men’s and participate in the trade show the following week.

According to Willis, the brand will showcase its basics — loose T-shirts, deconstructed suits and oversize trousers made from an Italian knit twill — along with new categories including denim jeans, which are cropped with a higher waist and an unfinished hem and graphic T-shirts.

When the team isn’t working on Second Layer, it is designing shoes for high-end sneaker brand Article Number, which is carried at department stores including Barneys New York, Selfridges and Colette. — ARIA HUGHES

Cofounders Chris Pappas and Ryan Crenshaw believe their new brand, Used Denim Product, is filling a void in the selvage denim category. “We saw a hole in the market for amazing quality products that were on trend but had an accessible price point. That was the premise behind starting this brand,” said Crenshaw.

The New York- and Los Angeles-based founders are launching this self-funded line at The Tents @ Project and focusing on a core collection of denim that includes six styles and 14 different fabrics with four to five types of washes. The collection, which is made from Japanese selvage denim, will retail from $160 to $245. Jeans feature authentic pony leather patches, copper rivets and rip-and-repair detailing.

Crenshaw is familiar with Project as he used to act as director of The Tents at the trade show. Pappas previously worked in sales and public relations at Donna Karan and Hugo Boss before helping denim lines including Diesel, G-Star and PRPS establish their brands in the U.S.

Pappas and Crenshaw foresee the line expanding to be a full lifestyle collection and will introduce tops and leather items next season.

According to Pappas, UDP is targeting a wide variety of consumers.

“There’s something for everyone in this line,” said Pappas. “We are trying to create our own demographic.” — ARIA HUGHES