The jeans will retail for $220 to $290 and will launch at Neiman's and Nordstrom in October. 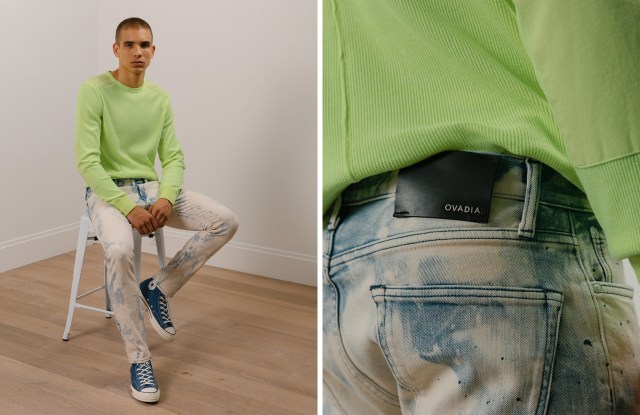 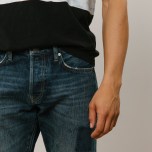 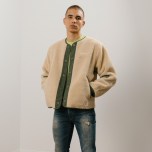 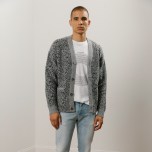 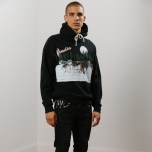 NEW YORK — The Ovadia brothers will introduce their first comprehensive denim and basics collection this October to offer an alternative to what they see as a stagnant designer denim market.

At the same time, the corporation has officially changed its name from Ovadia & Sons to Ovadia New York — or simply, Ovadia.

These shifts are among the first visible changes orchestrated by Neal Kusnetz, who joined the company last October as president. Kusnetz, the cofounder and former president of Robert Graham who had also served as president of men’s and private brands for Xcel Brands, took over the day-to-day operation of Ovadia to help it expand beyond the U.S., relaunch the e-commerce site and move into other categories.

The first order of business was denim.

“The whole premium contemporary denim market has been maturing for a while,” Kusnetz said in an interview at the company’s new offices in SoHo. He claimed most designer brands merely dabble in a few denim pieces while the bulk of the business is a volume “$99 outlet play.”

Working with Shimon and Ariel Ovadia, the twins that founded the business in 2010, they have created a 30-stock-keeping-unit collection of jeans and complementary tops and jackets with a “modern vintage” vibe that will retail for around $220 to $290 and go up against Purple, Ksubi and other popular high-end jeans brands.

“We’re super excited about this,” said Shimon Ovadia, who admitted to a lifelong love of denim. “My first introduction to fashion was through denim. In 1988, my mother took me to the Levi’s store on King’s Highway in Brooklyn — I was wearing an “Unbutton My Fly” T-shirt — and I was infatuated by the 501 wall. And through my adult life, I’ve always had a passion for denim.”

But he and his brother realized that producing a denim collection was complicated and required an intimate understanding of sourcing, fabric development, washes and fit. “We understood it was a beast of its own,” he said. So with Kusnetz’s help, they spent the past 12 months creating the collection.

The result is a line that ranges from light to dark washes in neat to distressed finishes. Some of the models have fashion details such as safety pins or studs and whiskering. Others have subtle leopard prints and creases. The patches — which read ‘Ovadia’ in a raised metal finish — range from cow, leopard and zebra prints to solids. All of the pieces are produced in Turkey. “Nothing is over the top,” Kusnetz said.

There are three fits: skinny, slim and straight leg tapered. The leg openings range from 12 inches to 14 1/2 inches.

Shimon Ovadia said many of the models are based on pieces from his and Ariel’s “personal archive. We’ve been hoarding jeans for 15 years,” he said. “Getting authenticity down in denim is critical. If you don’t, things can go bad really quickly.”

Within their high-end designer collection, which began primarily as tailored clothing but has since evolved into a full lifestyle offering, the Ovadias had “sprinkles of denim,” Shimon Ovadia said. “But it was not a full-on collection for the denim area.”

The offering also includes an assortment of trend basics such as waffle knits, graphic Ts, sweatshirts and hoodies.

The initial collection has been picked up by Neiman Marcus and Nordstrom for resort, Kusnetz said, as well as several specialty stores, including Extra Butter.

Kusnetz said the denim and basics collection can eventually be a $40 million business, a volume figure similar to that of the collection.

“We were thinking about how to take the brand to the next level,” said Ariel Ovadia. “The collection continues to be the roots of the brand, but this is the next step.”

Turning to the name change, Shimon Ovadia said that when they started the brand, having the “& Sons” in the name “helped with the heritage and the story.” Their father, a pro soccer player in Israel, started a children’s wear company when he moved to the U.S. in the Eighties and the brothers grew up working for that business.

“We’re looking into the future and it’s the right time to simplify the name,” Shimon Ovadia said. “And consumers and the industry always refer to us as just Ovadia.”

His brother added: “We feel good about it — less is more.”

And is their father OK with the decision? Ariel Ovadia answered with a smile: “It still says Ovadia, doesn’t it?”