Despite a slimmer Milan calendar, observers believe the two events form an influential and key men's wear platform, touting the strength of the brands and their impact on the sector.

There’s no arguing that the Milan’s Men’s Fashion Week calendar has shrunk in days and number of shows from years past and this season, which runs from June 15 to 17, it lost a cornerstone in Prada, which exceptionally decamped to Shanghai to show on June 6. Itinerant shows and coed collections in general have chipped away at Milan’s men’s calendar — but observers are still trumpeting its central role, especially pivoting around Pitti Uomo.

“Between Florence and Milan, it’s the most beautiful fashion week in the world,” enthused Brunello Cucinelli. “Pitti Uomo is an open-air fashion show, with 30,000 people walking around in a continuous exchange of ideas and it’s complementary to the big-name fashion shows in Milan, whose nature it is to hold such shows.”

Carlo Capasa, president of the Italian Camera della Moda, has long been saying that Milan Men’s Fashion Week and Pitti Uomo together form one single Italian fashion week. “They have two different vocations but there’s no other country that has this kind of global offer and impact that Italy has,” Capasa contended, touting the 800 showrooms and 3,000 brands present in Milan.

“This is a story that comes around regularly, but Pitti and Milan work very well together, and it is vital for us to have Italian brands represented at Bergdorf Goodman and Neiman Marcus,” said Bruce Pask, Bergdorf Goodman’s men’s fashion director. “It’s a very organic movement, brands respond to external forces. London [Fashion Week Men’s] is truncated and less robust but there is still viability, it’s not less important. The responsibility relies on us to investigate, with our curiosity working hard to find things, not only at fashion shows — what are the cultural references that are informing each city….One day shorter does not mean that we are not busy.”

Paola Cillo, associate professor and vice director of the department of management and technology at Bocconi University, pointed to several factors that now shape the men’s calendars, since the traditional time frame to present the collections is made less important by other brand-specific events. Fashion weeks in the past represented “the only moments that would highlight the creativity of designers. The number of capsules or groups of collections that have enormously increased today do not fit with the classic presentations every six months,” he said. Also, Cillo pointed to the plethora of media that now offer different opportunities to reach the end target — no longer represented by only buyers and journalists — “without the need to have everyone arrive in the same place at the same time.”

“Brands are now telling their stories in different ways,” agreed Capasa. “Fluidity and coolness describe the new generations, and we have to embrace this fluidity, we cannot be surprised, there can no longer be rigid criteria, it’s no longer only about presentations or shows. Each brand decides in its own way how to represent the label authentically. The Camera should create frames and logistics but it would be a mistake to dictate to brands how to do that.”

Capasa emphasized the changes in the end consumer, in brands that now increasingly connect to art, cinema and lifestyle and in communication. “It all makes sense if we understand the moment we are living in. We at the Camera have to strengthen our pillars, from sustainability to supporting young talents, putting that at the center of our system, which is not based on how many shows there are.”

Michele Norsa, vice president of Missoni, which regularly shows in Milan, said the show system has been “an extraordinary and winning communication tool, drawing attention to fashion four times a year,” but he observed that “there’s been an upgrading into more professional — and increasingly expensive — shows.” This has turned into an issue for small and medium-sized brands, as the cost of such shows can weigh 1 or 2 percent on sales.

“It’s easier for big brands, but for the others this is a moment of reflection. I believe there are many different alternatives, depending on the structure of the business and its design content,” Norsa said.

He contended that, while there may be fewer shows, there are also several brands that have chosen Milan to draw attention to their labels, such as Stella McCartney, who will introduce her men’s and women’s spring 2020 collection here, or Isabel Marant, who will host a party on June 15 at the central storied Palazzo Isimbardi venue.

“Milan is very attractive now, people are seeking an opportunity to come to Milan for its design and art offer, which is an asset to the city. I often wish some of the art exhibitions would coincide with fashion weeks. In any case, even if the number of days is reduced, the strength of the men’s brands here — from Ermenegildo Zegna and Kiton to Isaia — is bigger than anywhere else,” he said.

Kiton chief executive officer Antonio De Matteis also believes that “Milan as a commercial site together with Florence remain the most important” hubs in the world. He believes the schedules as they are now “allow buyers and press to take a little bit more time to check out the brands, see the clothes up close and touch and feel the fabrics” — a must in men’s wear. “There were moments in the past that there was just too much overlapping of events.”

De Matteis contended that he had never seen the attraction of the suit disappear, but that there has been “a transformation in lighter, less formal and deconstructed models.” The company is planning to open two stores in the U.S., one in Manhasset, Long Island, this summer, and the other in Palm Beach in the fall. A store in St. Moritz will open in December and two in China by the end of the year. These follow a unit in Marbella inaugurated last Easter. “One step at a time,” said De Matteis of Kiton’s retail strategy. 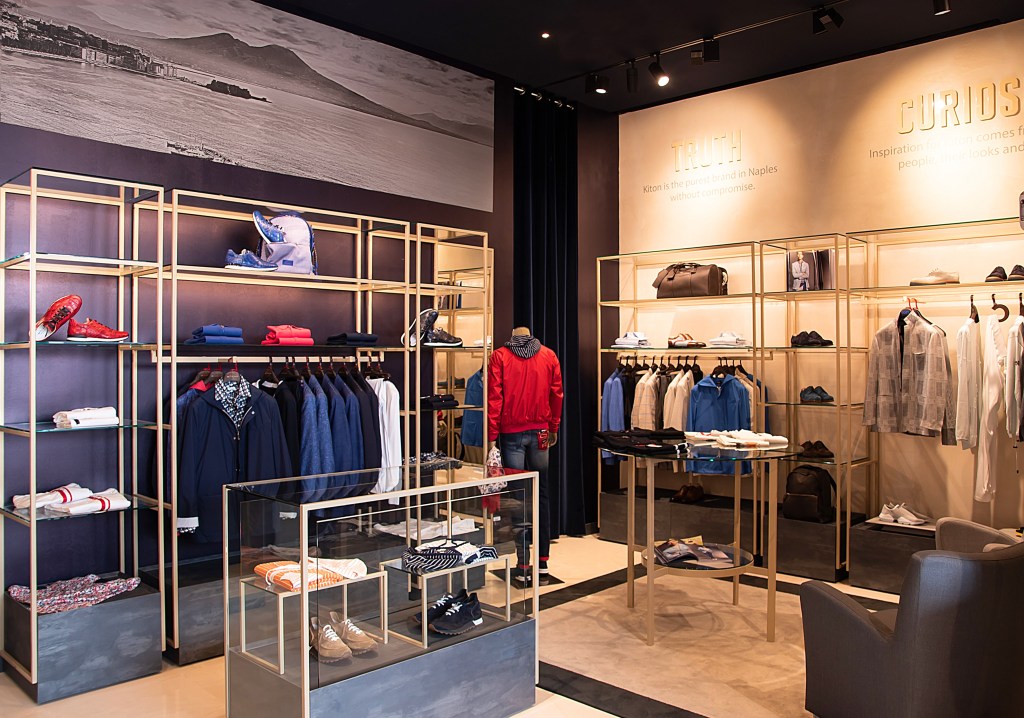 Further bridging Florence and Milan, some brands show in both cities. Canali, for example, will present its core tailored lineup in Florence at the 15th-century Palazzo Ximènes Panciatichi, while its recent and more experimental line Black Edition will be showcased in Milan at the company’s striking showroom in the new Porta Nuova district. First offered in January as a capsule, this sophisticated casual division winks to a new customer base, with its jersey suits, technical Windbreakers and new lettering.

Stefano Canali, president and ceo of the family-owned company, said Milan and Florence “complement each other perfectly and there is no overlapping.”

Canali was careful to underscore that the company has been reassessing its strengths and that there has been an evolution in style and product, with softer tailoring. After past collaborations with the likes of Andrea Pompilio and Hyun Wook Lee, the firm is relying on its own team, “dusting off the brand’s image while remaining true to its essence. We believe it’s time to invest in a different kind of communication, and we have been hiring new management figures. We don’t want to overturn our sartorial heritage. Consistency has paid off for us, and retailers know they can rely on us without any surprises. This is a fundamental element,” Canali said. Business is brisk with department stores, he said, noting that the U.S. now accounts for 40 percent of revenues and that Canada, Greater China, Russia and Italy are the brand’s main markets.

In his own personal MO, Cucinelli, who usually presents his collections in both Florence and Milan, said he had sent personal letters to distribution partners inviting them to travel to both Italian cities. The entrepreneur said that this season everything would be “slightly softer,” with a bit of color, from orange, red and azure,” and shirts with colorful stripes to add a young touch to the suits. “It all depends on how you combine the pieces,” he said. 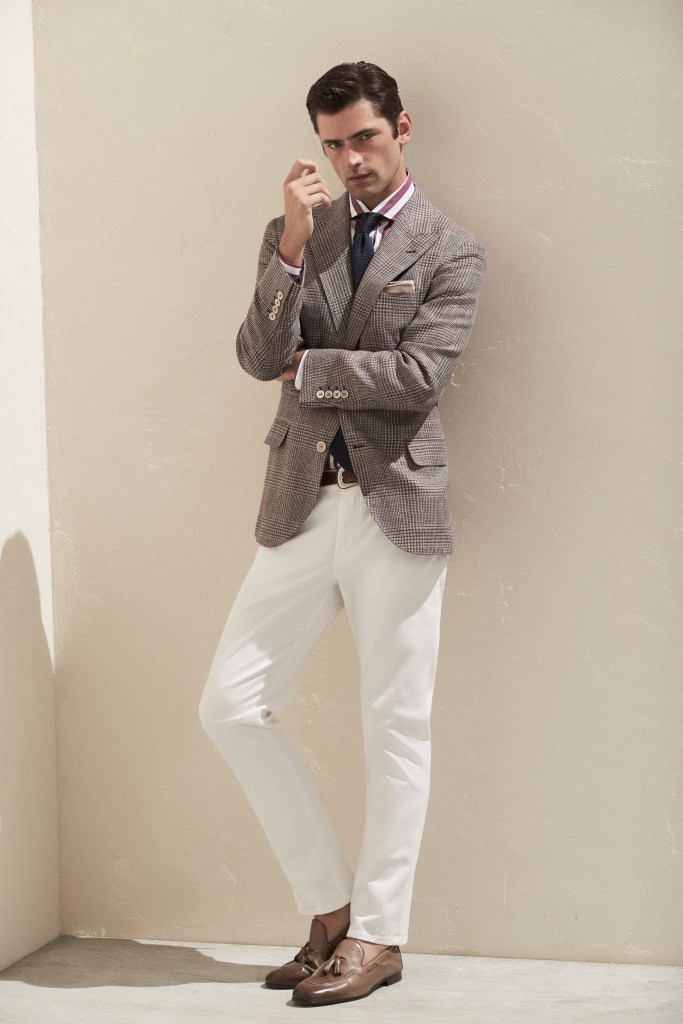 The Trussardi family has a strong link with Milan and chairman Tomaso Trussardi said he considers it “the capital of South Europe, which has become increasingly more international in the past five years. We remain loyal to Milan, the city is at the center of our values.”

Trussardi on June 15 will present the third chapter of its Archive+Now project, this time with Giorgio Di Salvo. Archive+Now was launched in February, shortly after the acquisition of the company by independent asset management company QuattroR, and it involves working with select Italian talents, asking them to revisit some of the brand’s archival pieces, images and lifestyle products through photos, installations and videos, which are mainly active on social media channels and online.

“The style identity of brands is no longer only identified in the four shows per year. Depending on the strategy of the label, there are many moments now to present one’s vision. There are the apex moments, those that define the future of the brand,” Trussardi said.

Federica Montelli, head of fashion at Rinascente, said she realized that “Milan, squeezed between Pitti and Milan should create its own specific identity as a city and create special content to attract buyers independently of the brands showing each season as they can change as they do in Florence.”  Montelli said she had not felt pressure from brands to combine men’s and women’s fashion weeks or to move dates.