Some buzzy brands to check out at the upcoming trade fair in Florence.

By Alessandra Turra
with contributions from Aria Hughes
on June 11, 2015
View Slideshow 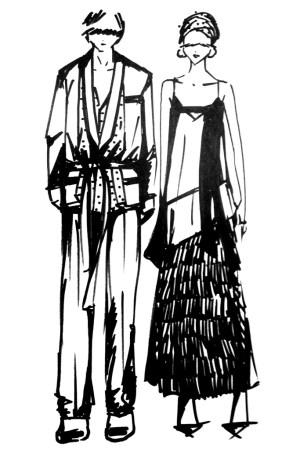 Gypsy-glam is the look that David Parisi and Alessia Crea conjured up for their first ready-to-wear collection under their Casamadre label, which launched in 2011 as a footwear brand.

“The collection represents a group of Romani arriving on an imaginative land in a boat,” said Parisi, noticing that while they kept the silhouettes quite traditional and simple, they enhanced the mood with the accessories, which include jewelry pieces “resembling obis.”

The collection, which will be shown on June 17 at Florence’s Dogana venue, includes five men’s outfits, five women’s looks and five unisex styles.

For the men’s and unisex options, Casamadre teamed up with Lanificio Fratelli Cerruti, which developed exclusive wool and cotton fabrics for the brand. These were used for a range of pieces that include double-pleated pants, vests and double-breasted blazers. The duo focused on a black-centered palette with pops of color, such as brick-red and blue-green.

To complete the look, the designers developed a collection of shoes, which includes a napa leather version of the traditional Moroccan slipper, as well as two bags.

The collection has not yet been priced.

Herno is rediscovering its roots.

The Italian outerwear company, which started its business in 1948 producing trenches, is unveiling a new Rain Collection at Pitti Uomo.

“It’s the first time we’re working on our heritage, because we’ve always tried to focus on a very new, modern product offering,” said Herno chief executive officer Claudio Marenzi. “But after having established solid relationships with our clients, we felt that we could focus on something different.”

The line, which features a new label that replicates the original one from the Forties, will include a range of straight-lined trenches and raincoats crafted from two materials. The former, which pays homage to the tradition, is in cotton treated to be waterproof, while the latter is a lightweight polyester finished with thermo welding. The same materials have been used for car coats, blazers and peacoats.

Prices have not been determined.

The suggestive Piazza Ognissanti in Florence, facing the Arno river, will be the stage of the En Plein Air runway show to be organized on June 17 by Ports 1961 to celebrate its second men’s collection by Milan Vukmirovic.

“Florence with Pitti is a pillar of men’s wear, it’s an established men’s destination, but at the same time is very much in the now,” said Salem Cibani, Ports 1961’s chief executive officer, in explaining the decision to show the brand’s new collection during Pitti Uomo.

This combination of traditional and modern elements is the basic style that Vukmirovic has infused into the brand. Ports 1961 has drastically changed its image under the designer, whose experience in the fashion industry includes editor, photographer, buyer and designer.

“Milan really understands what people want, what guys want to wear. He develops real collections, close to our heart, made to be worn,” said Cibani, describing the lineup to be presented at Pitti as “a happy collection.”

“The spring-summer collection is a fantastic evolution of the winter one,” he said. “It’s a very strong continuation of the first season. It’s a photogenic collection, easy, relaxed, fun, masculine, it has a real coolness.”

According to Cibani, the arrival of Vukmirovic not only created a new buzz around the brand, but also had an impact on business.

“We increased the sales of men’s wear,” said Cibani, who said the company registered double-digit growth in sales. “Men’s wear currently accounts for 35 percent of the brand’s total business and before Milan, it was around 25 to 30 percent,” he said.

In order to maximize the potential of the line, Ports 1961 is developing a strategy centered around opening dedicated men’s stores. The first was unveiled in Hong Kong at the end of May, and the brand is about to revamp its New York store in the Meatpacking District, as well as its Paris unit on Rue Saint Honoré. Both stores, which will be ready in September, will be transformed into men’s units.

C.P. Company is celebrating its 40th anniversary with an event at Pitti Uomo’s fairground Fortezza da Basso on June 16.

The Italian outerwear company, which Enzo Fusco’s FGF Industry acquired in 2010 from Carlo Rivetti’s Sportswear Company, will set up a special installation with 40 mannequins sporting some of the brand’s most significant archival pieces. In addition, the label will unveil three versions of its signature hooded windproof Goggle Jacket crafted from three exclusive materials, including a high-tech model and another made from the combination of different dyed cloths.

Louis Leeman will use its Pitti Uomo platform to launch collection of small leather goods.

The men’s luxury footwear line, which launched in 2012, is known for its bold shoes, but the Paris-based brand is taking a more understated approach for the small leather goods line.

“The bags are very clean-cut. A lot of men who work want to carry something understated,” said Louis Leeman, who founded the brand with his wife, Erica Pelosini.

The line will be priced from $200 to $1,000 and include cardholders, wallets, backpacks, briefcases, laptop cases and tote bags. For footwear, the brand will introduce a new high-top silhouette and a geometric printed canvas.

During the trade show, the brand will open the doors to its Florence atelier, which is housed in a 15th-century building, and show buyers and press how the merchandise is created.

In the year of its 130th anniversary, Tuscan women’s bag label Gherardini is making its debut in the men’s arena with Mr. Gherardini, a line of men’s bags and small leather goods, at Pitti Uomo.

“They have to be practical and comfortable,” said Riccardo Braccialini, referring to the line of about 10 styles crafted from both the brand’s signature Softy material, as well as a vintage one paired with leather for a more elegant look.