MSGM to Fete 10 Years With Men’s Show in Florence

The brand's founder and creative director Massimo Giorgetti sat down with WWD a few days ahead of the show, taking place on June 13.

MILAN — Kicking of the celebrations of its 10th anniversary, MSGM is gearing up to unveil its spring 2020 men’s collection with a runway show on June 13 at Florence’s Nelson Mandela Forum sports arena. The event marks a return to Pitti Uomo, where the brand hosted a lively presentation in June 2013. MSGM founder and creative director Massimo Giorgetti sat down with WWD a few days ahead of the show to unveil details about the upcoming event, discuss the past 10 years and the things to come. 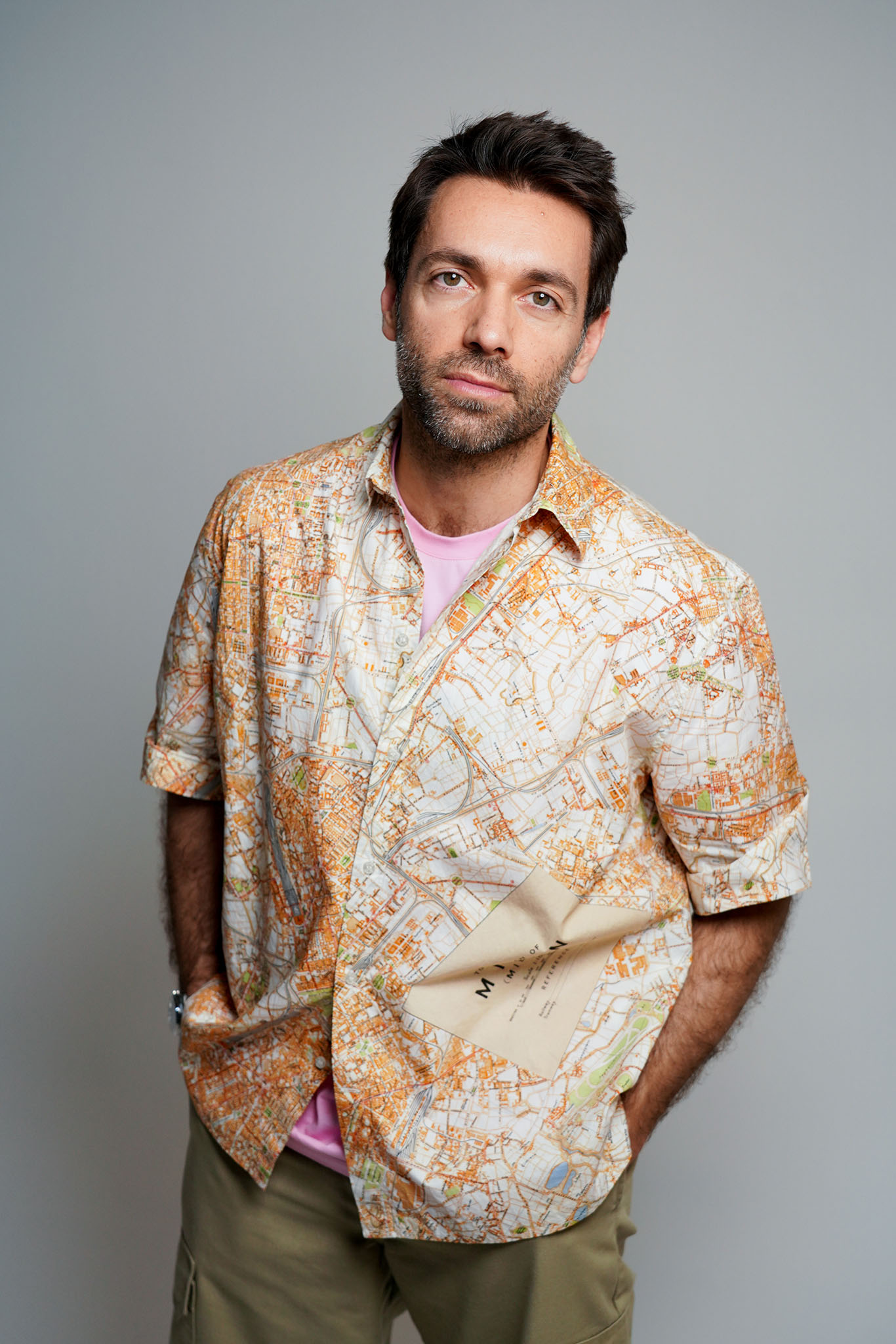 WWD: It seems like yesterday when I came to the Riccardo Grassi showroom to meet you for the first time…but it’s actually already 10 years of MSGM.

Massimo Giorgetti: Yes, it’s 10 years of MSGM! And we decided as the first celebratory event to accept this invite from Pitti because even if our men’s presentation in Florence happened in June 2013, when the brand was already six years old, I think that Pitti added fuel to the fire to give a serious boost to our business. MSGM was officially launched in 2009 but the first few years were all about women’s wear.

The men’s division was about to be shut down, the men’s business was extremely complicated, it was never accounting for more than 5 percent. In 2012, my partners and the showroom wanted to let men’s wear go, also because at that time many brands were closing their men’s lines. But I fought for that, I really dug in my heels and, nine months after, we received the Pitti invite. We decided to present there and in the following weeks we started receiving calls and e-mails from buyers who were interested in the men’s collection. I think that Pitti really gave us a stamp of approval. Two weeks after the presentation in Florence, we got a phone call from the Camera Nazionale della Moda asking us to show the following September…and that’s how everything started.

WWD: Why do you think the presentation in Florence was such a cornerstone for the brand?

M.G.: I have to admit that I really realized that presentation in Florence has been crucial also on a stylistic level. If you think, there were neon colors, skaters, tie-dye, the first logos, the first technical sandals, the first sneakers, jeans…there were all those elements that you can find in all the current collections. I have to say it was a pioneering show, probably a bit too ahead of the times. I think that after that collection, our men’s business took off because a revolution happened in the fashion industry. I now understand why the men’s line was suffering before, because in 2009, 2010 and 2011, there were no sweatshirts and T-shirts in the men’s fashion business. But then the streetwear revolution came, the world of luxury started looking at streetwear, became more democratic, more inclusive, got closer to sports brands and contemporary labels, such as MSGM.

WWD: What should we expect from the show?

M.G.: For years, I had the feeling that the MSGM men’s DNA was not as clear and strong as the women’s. Probably at the beginning this was true, but now I think that the men’s DNA is clear and defined, and this is what I want to show in Florence. When we got the invite from Pitti, I started thinking about an iconic show with revisited archive pieces. But then when I started working on them, I found the overall effect a bit old, already seen, and I said to myself: Is MSGM really a brand which can do a celebratory, nostalgic runway show? The answer was no. So this is going to be a runway show which celebrates the DNA of the brand, which celebrates this mix of different energies, talents. There will be collaborations with the world of music, art and sport, and a desire to celebrate the brand’s aesthetic codes will stand out. There will be neon colors, tie-dye, prints, streetwear, but also tailoring, which is something that is currently working, and also something new. Maybe I’m wrong, but I still have the desire to experiment with something new for the show and I think I’ll continue to do this until I can…and I feel very lucky because I have no pressure from the commercial and merchandising departments.

WWD: Will you risk as much as you did with the latest women’s show? That was kind of risky…

M.G.: A lot of people didn’t understand the women’s show…I actually think we had a problem with the casting. Maybe I put too many ingredients in the blender, to be self-critical. However, I honestly loved that show, I think it was really MSGM, more iconic than others. I really think that right now you have to take some risks with the runway show and be a bit courageous, which is something I have always been and I’ll continue to be.

WWD: During the past 10 years you developed several collaborations with different personalities and brands. Did you work on anything special for the show in Florence?

M.G.: I want to point out that MSGM was the first fashion brand to develop a full, continuing collaboration with an artist and I refer to the collection we did with Toiletpaper in 2013 and 2014. I remember that when we announced this partnership, we got bombed with thousands of phone calls…It was kind of unexpected. Then, we did other collaborations with the world of sports, including Diadora and Fila, with artists, such as Maurizio Cattelan, Nico Vascellari, Henry Hussey…. Let’s say this is the moment of collaborations but I think this phenomenon is starting to decline, because at a certain point a brand needs to find itself. But I’m trying to learn to not get bored of things too quickly…in my head collaborations are over, but people still like them. However, collaborations are great since they put together two different energies. In this show, there will be a collaboration with a sports brand, an artist and also a quite unexpected brand…people might find this a weird match but, from this brand, we chose something that is not so famous and we are taking it out from the context. My only concern is that there are too many collaborations around and that at a certain point a brand needs to explore its own DNA more. 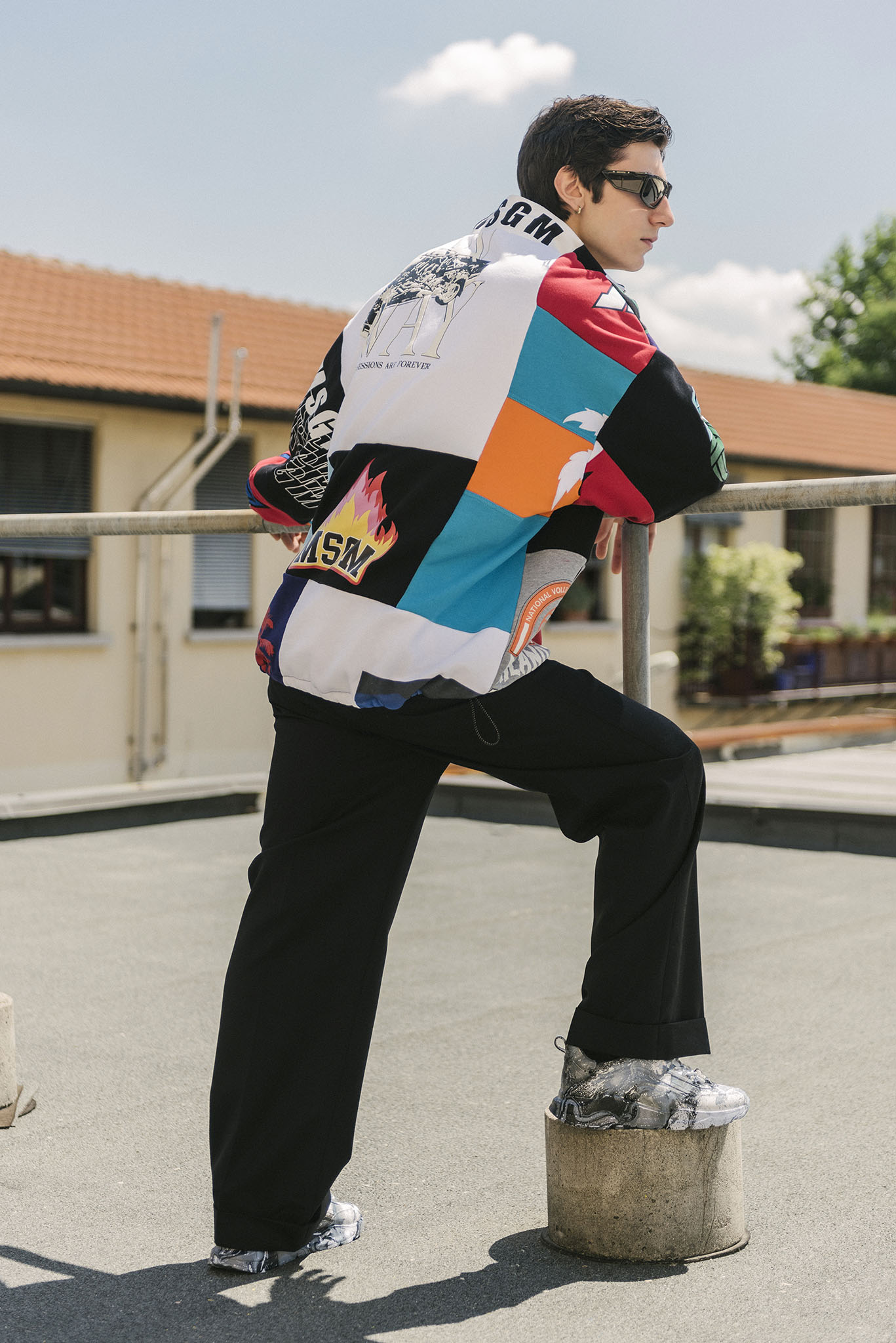 WWD: Are Rocco Siffredi and his son Leonardo Tano going to be at the show?

WWD: Do you think that underwear can become a serious business for MSGM?

M.G.: That was only a preview; we will soon launch another drop and then we will announce a licensing agreement for underwear, activewear and beachwear. What I really learned from this is that if you take some risks, if you do these things with a certain light-hearted, positive attitude, people appreciate them. I really believe that the sentence “Lightness is not superficiality” we printed on a T-shirt, which is actually sold out, really represents what MSGM is and what I am. I think that MSGM is an honest brand, it doesn’t try to be what it’s not, it’s not a first line, it is not design-driven, but it doesn’t want to be low contemporary. It’s about made in Italy, elevated contemporary. It’s about carefully designed and manufactured products, crafted and conceived with love and passion. And I think this is something I want people to perceive with the show in Florence.

WWD: Why did you decide to show at Florence’s Nelson Mandela Forum sports arena?

M.G.: When we were doing the scouting for the location, we entered the Forum, this concrete arena with an almost brutalist entrance, where at the center there is a reproduction of Nelson Mandela’s prison and the concrete walls are printed with his quotes about equality and respect…and I was so moved by the idea that sports are actually so important for the health of people and the world. I really believe that sports fix everything, sports have the power to change the world, to inspire people and to get people together in a unique way. Sports talk to young people in a way that only they deeply understand.

WWD: What do you expect from the next 10 years?

M.G.: In the next 10 years, I’d love to have more time for myself — this is my biggest dream, because the past 10 years have been fantastic but filled with sacrifices, crazy deadlines and a lot of pressure. At the same time, I hope to have more time to dedicate to communication, campaigns, maybe licensees, such as eyewear and fragrances; this aspect of the job is extremely exciting. We are also about to launch activewear, which is the result of two years of studying people in the gym, in the street. It has to be just right, easy, comfortable, cool, high-tech. There is a part for running, which is more tacky-cool, and a part for yoga, that is more meditative and cleaner.

M.G.: We are going through a period of major changes and we are questioning if the deliveries of the collections are actually correct. I think brands are suffering from the fact that there is a misalignment between the collections you deliver and the actual season. Just to explain, we are starting delivering pre-fall, which for us is a winter collection, but summer is starting now. It’s too early. We are trying to create a better alignment between collections and seasons, because the actual situation is pretty crazy.

WWD: And what about the retail business?

M.G.: In September we are going to open this really big store in Milan, on Via Broletto, in the Brera district. It’s a challenge because it’s really big — 300 or 400 square meters [3,220 to 4,300 square feet]. It’s a challenge for the company, but also for myself because I’d love to give people a reason to enter the shop, which is not buying MSGM products. There will be novelties about the future of MSGM because collaborations cannot stop at sneakers and footwear. There will be cross-pollinations with interior designs and really unexpected collaborations for the brand. I think that now, for a brand like MSGM, which is available on all the online stores, the physical shop must be a living entity. Why should I go to a MSGM flagship when I can find the same product at Rinascente, for example? You have to offer an experience and something which is not MSGM…maybe I’m too democratic and too open-minded, but I shared this idea with my business partners and my publicist and they liked it.

Ah…and going back to your question, another thing that I really hope for the next 10 years is that we don’t lose the fresh, young and enthusiastic approach to fashion. The risk is huge, but I’m pretty confident. It has been a year that Style Capital invested in the brand and they joined us kindly and politely. Ten years are a lot, but they were very quick…I’m pretty confident that the curiosity, enthusiasm and desire to do will never go away. I really love this job.