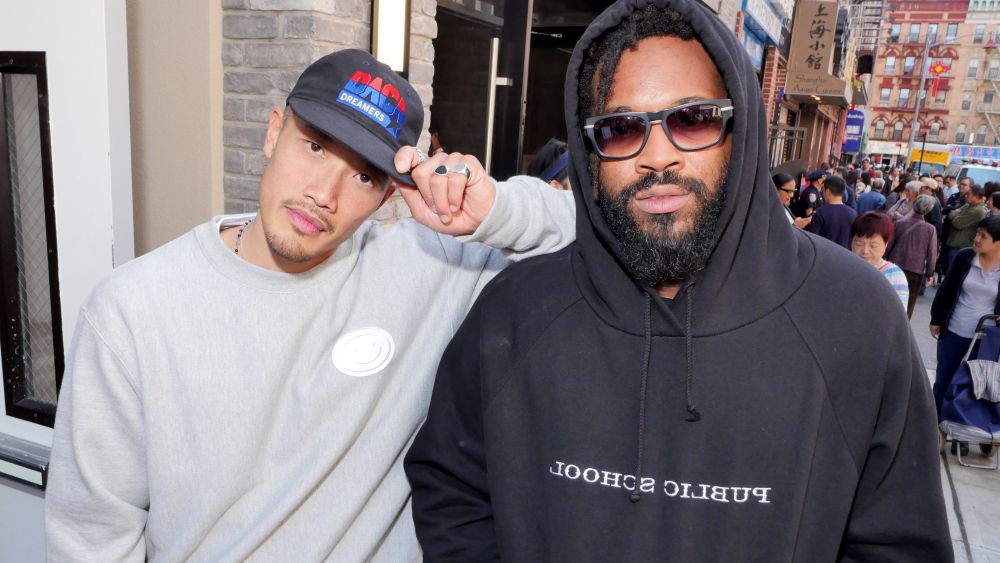 Public School is like a cat with nine lives.

The pioneering streetwear brand, which launched in 2008, has been in and out of the limelight over the past decade as it navigated the vagaries of the fashion industry.

And when it opens the doors to its pop-up with Nike today, it will mark the latest reinvention strategy for the brand.

Last year, Public School collaborated with Nike on a sneaker centered around the Air Force 1. Although the initial design was created for the shoe’s 35th anniversary, it was never released to the public. That will change today when the sneaker will be front and center — along with complimentary apparel — at PSNY’s pop-up space at 3 Howard Street in Manhattan. The shoe will be released globally on Wednesday.

This is the first time Public School has worked with the core Nike collection, although the designers collaborated on the company’s Jordan brand since 2014.

To celebrate the new partnership, the designers and Nike will host a Streetball Classic event on a court on East Houston Street before the store opens to the public tonight.

“We’re doing a basketball tournament in celebration of our AF1 collaboration,” explained Dao-Yi Chow, who designs Public School with Maxwell Osborne. He said the sneaker, which is a mash-up of the low- and high-top models of the shoe, are known as “uptowns” in New York. “Our collaboration is a love letter to that,” he said. “We’re a downtown brand and this is designed to bring uptown and downtown together. We’re calling it the High Low.”

The pop-up, which has an installation in front and a customization station in the rear, will remain open all week.

After that, Chow said the store will be converted to another concept, one that will sell the Public School collection that was shown in the raw space during New York Fashion Week: Men’s in February.

“This space is a temporary/interim pop-up,” Chow said, pointing to the gravel floor and white walls. “We have the space until the end of the year and we’re planning a lot of innovations every month. The presentation [in February] was the launch of the space, now it’ll be the Nike activation and we’ll be doing something with the NBA in October.”

The collection they showed in February centered around a lot of the brand’s greatest hits that were created from recycled, upcycled or dead stock materials in partnership with like-minded brands such as Eileen Fisher and Levi’s. The collection included a super-sharp black suit with built-in cargo pockets and statement zippers, a short-sleeve jumpsuit that reflected the brand’s expertise in designing sartorial streetwear, and other looks with a similar aesthetic. A new PSNY logo was created as a visualization of the brand’s new beginning.

Chow said keeping the store as a Public School retail location after the end of the year is a possibility, but nothing has been decided. “It’s not us being shy or secretive,” he said. “We’re just keeping our options open. We could be here 10 years or 10 months.”

Public School’s journey over the past decade is “the quintessential fashion story,” Chow said. “It’s not a Cinderella story, although we’ve had that, too. But it’s about the ups and downs of the fashion industry. We’re not immune to the changes and what’s happening around us. But we also have staying power. We’re just trying to figure out a lane for ourselves.”

That lane involves the dramatic decision to exit the wholesale market and go direct-to-consumer. The brand is also men’s-only again, which was the way it started, although women’s is “in the queue,” he said.

“The switch to a direct-to-consumer model is a difficult one and has been a seven- or eight-month transition,” Chow said. “We just didn’t like the whole wholesale arrangement.”

In order to please retail partners, Public School was losing sight of its identity, he said. “Our brand was sold in a lot of places, but they all told a different story and they often weren’t aligned with our business. So we felt we had to do this.”

While a shift like this also requires a substantial investment, Chow said the brand is still privately owned by himself and Osborne along with Alan Mak, who has been a strategic partner since 2012.

Although Public School does sell online, a new e-commerce site is set to launch this week — if all goes according to plan — that will significantly upgrade the experience and offer a larger assortment.

This is just the latest move from the duo, who have partnered with everyone from Moët Chandon and J. Crew to Fitbit and served as co-creative directors for DKNY over the course of their career. They’ve won everything from the CFDA’s inaugural Fashion Incubator in 2010 to the CFDA/Vogue Fashion Fund in 2013, the Swarovski award in 2014, and the Woolmark award in 2015. But they also put the line on hiatus for two years from 2010 to 2012.

Chow said that to make it in fashion as an independent brand, “you have to be really well capitalized or really broke and put everything on the line.” Asked which one would describe Public School, he said, “We’re trying to pick our side.”

One thing that will undoubtedly benefit the brand is its streetwear-infused aesthetic, which has remained constant throughout the years.

“The barrier to entry is so low now. Anybody can create a brand and talk directly to the consumer. The obsession with streetwear is an obsession with youth. Now, everybody is a teenager until they’re 60. Five years ago, they may have felt silly, but now they’re embracing it.” And that’s good for Public School.

“But if there’s one thing you can count on anything in fashion, it’s that it’s cyclical,” Chow continued. “I’ll be curious to see what happens when everybody jumps off the streetwear wagon. Or maybe it’s solidified to the point where it has a permanent seat at the table, which would be cool.”