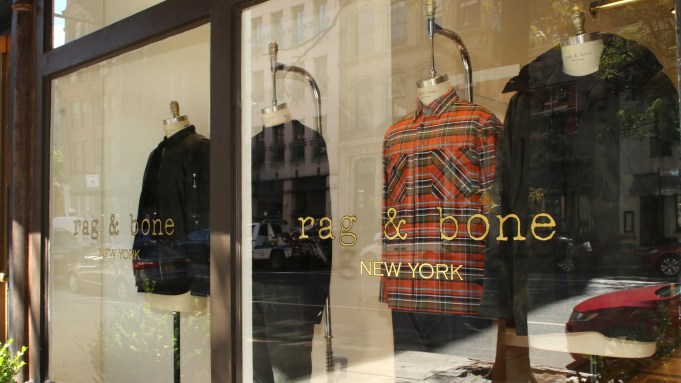 NEW YORK — Rag & Bone is expanding its own retail and male consumers are the first recipients of that new focus.

On Monday, a few hours before its spring runway show, the brand opened the doors to its first standalone men’s store, a 2,300-square-foot boutique at 228 West Broadway in TriBeCa.

The store is a true labor of love for Marcus Wainwright, chief executive officer, founder and creative director.

Not only is his custom, made-to-measure Storm Trooper suit front and center inside the entrance — he’s a major “Star Wars” fan — but there are also shelves inspired by his favorite sneakers and a case of some of his favorite items including Perceval knives, Leica binoculars and Grado Labs headphones.

Although the store is extremely personal, Wainwright stressed that it is not intended to reference the departure of his former partner David Neville, who left the day-to-day operations of Rag & Bone in June. In fact, he and Neville found the space — which had once housed the Bubble Lounge — together. “He was as involved just as much as ever,” Wainwright said.

Instead, the new store speaks to how “things are evolving for us as brand. All brands today are being forced to look at the future and decide what they want to be.”

For Rag & Bone, which now has sales of a reported $300 million, its future will center around speaking directly to customers. Although wholesale still represents some two-thirds of the business, opening stores and growing its digital sales allows the brand to better showcase its distinct voice. “We create so much content in our Rag & Bone films and our campaigns and you can’t use that in the wholesale channel,” Wainwright said.

While wholesale was how the brand got its start — “it gives young brands a chance to grow without spending all their money on their own stores,” he said — at this point in the lifespan of the business, Rag & Bone can invest in going direct-to-consumer which, in turn, should increase wholesale sales.

In addition to the TriBeCa store, Rag & Bone will open a two-story, 1,949-square-foot unit on Commercial Street in Spitalfields in London in November, followed soon after by a 14,000-square-foot store on Beak Street in the city’s Soho area. The Soho store will serve as the new European headquarters and showroom for the brand.

“We’ve always had an office in Chelsea,” said Wainwright, “but it wasn’t big enough.” The brand also has a store on Sloane Street.

But on Monday, the focus was on New York City. The TriBeCa store is the brand’s 10th in the city but the most “experiential.” There are custom graffiti installations in the fitting rooms by artists Alexis Diaz, Boy Kong and Joe Hill. There are also peep holes in each room allowing shoppers to see a time-lapse video of the artwork being created.

A gaming system and Apple TV will stream live sporting events for customers resting for a moment on the custom leather chairs. The site of the original bar from the Bubble Lounge was recreated as a cash wrap and also serves as a whiskey tasting area. Even the bathroom is unique, offering vintage pinup and movie posters from Michael Anderson, a collage artist.

Much of the furniture and fixtures were created at the Rag & Bone Custom Fabrication Shop in Brooklyn, where a dozen artisans are employed to manufacture pieces out of metal, wood and leather.

“We started with men’s,” Wainwright said, “and so we wanted to experiment with a dedicated men’s store. It’s guy-focused, and different and experiential. It tells the story of the brand and it’s a place that a guy will feel comfortable.”

Men’s wear represents about 30 percent of the business today and Wainwright said all of the company’s biggest stores are dual gender. But the concept starts with women’s wear and “then we see how we can get men’s in there,” he said. “But this store is dedicated to them.”

In addition to New York City, the brand opened a store in the King of Prussia mall in Pennsylvania on Sept. 1 and will add a unit on Walnut Street in Philadelphia in December as its retail rollout continues. Rag & Bone now operates 29 stores in the U.S. and seven overseas, as well as franchise stores in Asia and the Middle East.

“We’re a global business,” Wainwright said. “It’s never been more important to create a direct relationship with our consumer. Building out our retail footprint has allowed us more control over the stories we tell and the way people identify Rag & Bone.”