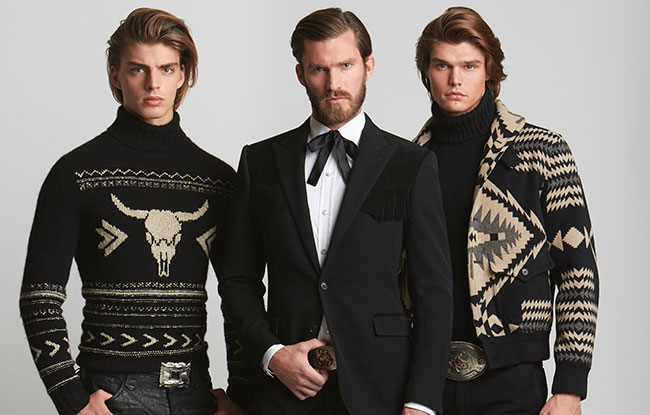 Ralph Lauren’s love of the American West will be front and center at his return to the official New York Fashion Week: Men’s calendar on Wednesday.

The designer’s Purple Label fall collection will include a handful of striking Western-inspired styles that would be as much at home on his Colorado ranch as in the Meatpacking District of Manhattan.

The range includes everything from American Indian patterns on sweaters and cropped jackets to sharp tailoring embellished with fringed sleeves. The fringe also makes an appearance on waxed denim jeans. Other Western references include statement belts and boots that would make any cowboy envious.

But the full Purple Label presentation will include much more. The designer will showcase an expanded assortment, including embroidered denim and cashmere joggers along with the requisite tailored clothing, which will blend traditional suit separates with sportswear elements to address the needs of the modern man’s wardrobe.

“My Purple Label collection for fall 2017 is all about a style that is personal, inspired by the man who wants to dress simply, yet sophisticated, who searches out that one special piece that gives his look an attitude of effortless cool,” said Lauren.

Purple Label will be shown in the Ralph Lauren offices rather than on a runway, but it marks the designer’s return to the New York’s men’s scene. The brand had participated in the inaugural season in July 2015 by showing its Polo collection, but Purple Label, the company’s highest-end offering, was shown at a luxury palazzo in Milan.

Lauren’s presentations are generally extravagant with the showroom filled with models and separate rooms for the designer’s different brands, but he steers clear of runway shows for men, saying that he prefers buyers and editors to be able to get up-close-and-personal with the line at a presentation.

The fall collection will be shown by appointment at the company’s headquarters at 650 Madison Avenue.