The designer will show his spring Purple Label line at the company's Italian villa. 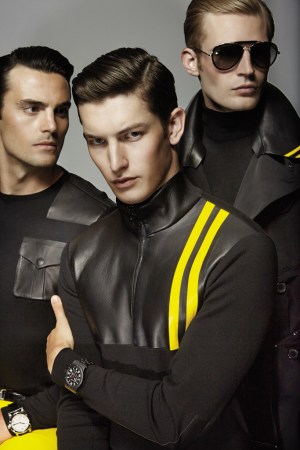 Call Ralph Lauren a citizen of the world.

“We’re a very international company,” the designer said during a preview of the spring Purple Label collection at his Madison Avenue showroom in New York.

With international sales now representing about 36 percent of the company’s business, Lauren decided to make the jump back onto the men’s fashion calendar by showing the luxury collection on June 20 at the company’s villa in Milan during men’s fashion week. He will also show his Polo collection during the inaugural New York Fashion Week: Men’s next month.

Although the company’s showrooms are elaborate and impressive, Lauren said very few international editors and retailers have the chance to visit, particularly those from Asia. “We don’t really reach everyone in the showrooms,” he said.

So it was time to bring the brand to them.

“The reason for this,” Lauren said of the decision to show in Italy, “is exposure.”

It will also help solidify the label’s new brand structure.

In May, Ralph Lauren Corp. said it would consolidate Black Label into Purple Label, which will be shown in a presentation format at the villa.

“I know everyone loves fashion shows,” Lauren said, but he believes influencers can get a better feel for the line if they can actually “see the clothes laid out with some style, and some background.” He said the show in Milan will be “more than just an installation with people standing,” which will allow attendees to “walk away knowing more about the product than they would if the guys ran down a runway. You wouldn’t know what the feel was, you wouldn’t know about any of the techy fabrics or what our statement is.”

Lauren said while it “may not have the pizzazz of a hot show, it will be a very personal showing.”

The discontinuation of Black Label has allowed Lauren to broaden the offering under the Purple Label moniker. The designer said the line now includes everything “from sport to elegance to daytime to luxury.”

In addition to requisite high-end tailored clothing — this season, there are two distinct color stories: navy and various shades of cream — Purple Label now incorporates elements from the Ralph Lauren Sport label through its use of sophisticated leathers, nylon and other high-tech fabrics.

Within the navy story, Lauren is stepping out of the box with tuxedos in navy jacquard and denim. “This is what a guy can wear out now. Today’s man wants to be more individual.”

Even so, the entire range is “all luxury, all sophisticated and very classy,” he said.

Within the cream section, Lauren will show everything from mocha to vanilla with touches of lavender used as an accent.

“I think this is new for the luxury customer,” he said. “It’s a little bolder, it’s a little more fashion.”

There are also various shades of black and gray in pieces such as a textured linen pinstripe suit and a black denim tuxedo.

Another section allowed Lauren to branch out into what he called a “racier look,” with nylon tuxedos, jumpsuits and Neoprene bags, some with acid green or bright yellow accents.

“This is the cool guy, this is James Bond,” he said. “This is high-tech for the Ralph Lauren Purple Label brand.”

Lauren said that he “absolutely” expects to one day show his women’s collection in Europe as well. “But we have to determine what that does to America,” he said.

Although he’s proud of being an American brand, Lauren said the world is much smaller today and borders are now blurry.

“We’re American, but we’re an international company,” he said. “A little kid growing up today sees a Prada bag, but she doesn’t know if Prada is an American company. Do you think anyone knows Volkswagen is German? Do you think they know Toyota is Japanese? Not everybody.”

Lauren said particularly in the luxury arena, “there’s less of a difference today. “My goal is really to set a tone that is timeless,” he continued. “I can still wear cowboy boots and a Western shirt and it doesn’t look hokey.” He added, smiling, “But you have to be handsome.”

Men — even wealthy men — seek out things they love that will last. “Men are about looking sleek and modern without looking fashiony,” he said. “At least my customer.”