Key trends included military details, embellishment, strong outerwear and above all, the commercial reality of the season. 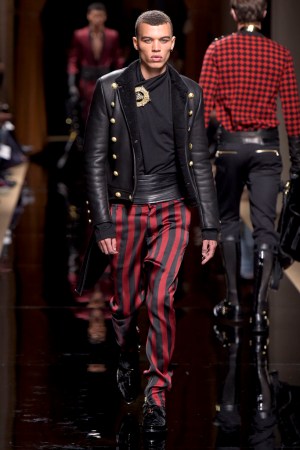 “The runway is becoming very commercial, the designers offered us something that was not too eccentric, with clothes that are creative yet very wearable,” summed up Jennifer Cuvillier, style director at Le Bon Marché.

“Paris felt more sober, with many playing it safe for fall — and rightfully so,” said Eric Jennings, vice president and men’s fashion director at Saks Fifth Avenue, noting how designers still felt impacted by the events that struck the city last November.

“The fashions were refreshingly less aggressive, a little more humble and restrained: it was a good season for retailers to get back to what we do best, which is to look for great, outstanding clothes of quality that men actually want to wear,” said Nelson Mui, men’s fashion director of Hudson’s Bay Co.

He also praised vendors that offered trans-seasonal items in lightweight fabrics, noting that designer customers are after newness and excitement in clothes, not seasons.

Jo Harris, general merchandising manager of men’s wear at Harrods, also praised the commercial potential she saw in the Paris collections. “Designers have found a good balance, creating designs that push the boundaries, which our customers like; however, this hasn’t been taken to the extreme and clothes still have a strong element of wearability about them, which is key,” she said.

Citing Dior, Valentino, Paul Smith and Officine Générale as her favorites, Harris said trends including checks and plaid, embellishments and all-black looks were the most salable.

“Designers continue to make bold statements through color, detail and fabrication, which our customer loves,” she said. “In contrast there is an ever-present demand for beautiful classic silhouettes created with the most luxurious yarns and fabrics; this was most notable at Berluti, which looked great.”

“There has been a tremendous amount of terrific outerwear, from shearlings and leathers to military style peacoats, officer’s coats and inventive takes on traditional overcoats,” he added, referencing regimental and decorative uniform aspects that added surface interest in collections like Balmain and Van Noten.

He also admired the use of traditional British fabrics like tweeds, herringbones and glen plaids incorporated into collections such as Givenchy, Officine Générale, Dries Van Noten, Junya Watanabe and APC.

Another trend he highlighted was the American Southwest, seen via “great, colorful graphics and patterns, beading and decoration, and copper accents,” at Berluti, Givenchy and Valentino.

“Paris has the largest, most compelling offering of all the fashion capitals,” said Jeffrey Kalinsky, vice president and designer fashion director at Nordstrom. “We believe fashion, not basics, will drive our business. Embellishments, plaids, distressing and military influences are all trends we are betting on.

“Our budgets are up from last fall, but only for brands that are delivering great product,” he added, saying his favorite collections were Dries Van Noten, Lanvin and Valentino. “Another noteworthy trend was exaggerated volumes, but that will be less easy to retail,” he continued.

Miu cited two principal trends: “sporty opulence,” in which fur, beading, embroidery and gold buttons are grafted onto sweatshirts or track and varsity jackets, as well as military coats, “and a more minimalist, almost Zen-like focus on artisanal touches, muted tonal palettes but interesting fabrics and shapes or volumes.”

He was not alone in praising younger designers, both on and off the runways.

“Paris collections are packed with surprises. It’s a very luxe season with many iterations of decorated clothes with rock star glamour or on the flip side chic, modern clothes with an understated elegance,” observed Tom Kalenderian, executive vice president and general merchandise manager of men’s for Barneys New York, listing Cifonelli, Lanvin, Dries Van Noten and Givenchy as highlights.

“Demna Gvasalia infused a new spirit into Balenciaga, working extreme, long silhouettes and material treatments such as textiles and leather dipped in latex; adding up to a new modern and surprising spin on this historic brand. And we were [also] very impressed with Paul Helbers. He’s making designer clothes that are timeless and luxurious,” he said.

The retailer noted how “shearling and fur are having a strong revival, both as trim detailing and in full length. Beadwork is at a higher level than ever. Color was amplified in Paris — a strong contrast to the rich but subdued tones in Milan. Clearly, the strength of the fall 2016 lineup enables us to maximize these brands for next year. The Parisian collections occupy a strong segment at the top of our men’s business,” Kalenderian assured.

Kalenderian was among those who praised Balenciaga. “Off the runways we had a terrific appointment at Balenciaga, we love their new direction,” said Scott Tepper, fashion director at Liberty.

In general, he said, “Liberty’s customer is responding strongly to the new ease in men’s fashion, slouchy and oversize proportions are key. Statement coats are the new blazer for him, so it was a relief to see them in so many different lighter weights, which paired with the dressed up slouchy track pant is the perfect uniform for fall.”

Tepper added, “Our confidence is high based on our business trend, reaction to the new season collections, and the strong fall product we have seen, and budgets are up accordingly.”

Le Bon Marché’s Cuvillier cited OAMC as among her favorites, as well as Dries Van Noten, AMI and Officine Générale. She also admitted to making some discoveries off the runways, although it was too early to name names. “We found lots of new things, in all segments, accessories, street, tailoring,” she said. “Principally in the showrooms, there were lots of nice surprises. The labels we know offered us great collections, and there was a real breeze of newness without being too theatrical.”

She continued, “Dries Van Noten was exceptional with its embellished army spirit. There was a utilitarian side, like in all the men’s collections, but with a peaceful side, it was really well worked.”

She also had particular praise for Thom Browne’s tailoring. “The clothes that were aged by time were in fact very elaborate,” she commented.

In terms of the color palette, Cuvillier said the khaki, bottle green, burgundy and navy seen in many shows would fit well at Le Bon Marché.

“There’s so much innovation here both on the runway and in the showrooms,” commented Andrew Lepp, divisional vice president of men’s wear at Holt Renfrew, whose top picks were Dries Van Noten, AMI, Berluti and Wooyoungmi.

Lepp also scouted the trade shows for new discoveries and was particularly impressed by the offer at MAN.

“The depth and breadth of luxury offering in Paris is incredibly impressive — the luxury men’s wear market is extremely vibrant, gaining more and more momentum season after season,” he said.

Saks’ Jennings praised the embellishment on the runways, and especially liked the jewelry he saw. “We have been in this phase of men wearing bracelets, but now we see rings and necklaces, some of which are layered. It’s a category I’m happy to bring into Saks,” he said.

Jennings listed Valentino, Dior, Paul Smith and Dries Van Noten among his favorite shows. He said, much like in Milan, he would stock up on statement outerwear — anything from the trenchcoat to the oversize anorak with fishtails. He also lauded Paris for its genderless and seasonless offerings, which came in the shape of sleeveless numbers and sweaters. “It all felt very timely,” he observed, singling out Swiss newcomer Essius among his latest discoveries.

Justin Berkowitz, in his first season as Bloomingdale’s new fashion director of men’s, said Paris was a “delight.” “Shows were incredibly strong with an overall emphasis on new, increased volumes and a changing silhouette rendered in soft luxury fabrics and increased surface treatments that have a strong commercial appeal.”

His favorites were Louis Vuitton, Junya Watanabe and Dries Van Noten, he said.

Berkowitz added that “military continues to be a huge trend in Paris and we believe in it strongly for the fall season. Utility details and shearling outerwear are key elements here that will register with the Bloomingdale’s customer. We are loving the focus on new trouser shapes and the variety we have seen — from carrot to cargo. And we’re also excited about the importance of knits, from plush textures to graphic stripes.”

Damien Paul, head of men’s wear at Matchesfashion.com, also felt it was a strong season for Paris. “There was a very clear fashion message, which is always important to our customer — but it was grounded in some really great product,” he said. The outerwear was particularly strong, he added. “There’s been a burgeoning movement toward oversize for the past few seasons but this time it felt the most commercial — I thought the supersized coats and knitwear at Haider Ackermann, Raf Simons and Balenciaga were exceptional.”

Paul said the company’s men’s wear business is growing and that it had been a strong winter for the e-tailer. “My favorite shows were Raf Simons, Lemaire and Maison Margiela. I was also really excited by what we saw from Balenciaga,” he said.

“[There was] a really strong outerwear offering,” said Darren Skey, Harvey Nichols’ buying and merchandising manager. “Shearlings in particular came through strongly.  There was also a strong trend in volume.  This was evident in pants and outerwear.”

“There is definitely a movement toward a cleaner palette, although there is still evidence of sportswear around in a more structured form,” he observed. “Customers are moving away from overt design, [and] there is also an appetite for new brands.”

Karen Vernet, Printemps’ general merchandise manager of men’s apparel, homewares and private label, praised the creativity, embellishment and quality of creations from Givenchy and Valentino. She also singled out Raf Simons’ knitwear and volumes and praised the creativity of Balenciaga’s new designer, Gvasalia.

But the men’s shows unusually had many seats left empty this season, as some buyers and members of the press skipped the calendar due to the heightened terror alert put in place following last November’s terrorist attacks.

A spokeswoman for Isetan Mitsukoshi Holdings told WWD that the company decided to send buyers to the Paris collections as usual, but that the number of staffers making the trip was reduced, with extra precautions taken in the interest of safety.

“The safety of our employees is the main reason that we are scaling back our company’s Paris business trips in late January. Those whose business there is not urgent will postpone their trips,” the spokeswoman said. “We recognize that some people need to make the trip in order to do their jobs, and for these people we are doing everything we can to ensure their safety, such as asking that during their trips they remain extremely vigilant and aware, and that they are always reachable by our Paris office.”

As reported, the Japanese government had issued a travel warning for France, which prompted the United Arrows team to do the bulk of its Paris brands shopping in Milan or back at home via showrooms.

Beams instructed its buyers to return to Japan right after their buying in Paris was over, while the Japanese media, including Shueisha and Hearst affiliates, canceled their trips all together.

But some of the empty seats may also have been down to the snowstorm that raged over the eastern U.S. at the weekend, causing some to change their travel schedules and head home before flights were canceled.