Being Rhude Could Get You Anywhere

Collaborations with Puma and Thierry Lasry are the most recent, but the Los Angeles label is far more ambitious with footwear, accessories and now women’s on the table.

He can’t talk about it, but it’s a big hint at where his men’s brand Rhude, started in 2013 and best known for its traxedo (that would be the track pant 2.0 with front pleating and side taping on the legs) is headed. That would be in a lot of directions, by the way: footwear, accessories, denim, eyewear, women’s ready-to-wear and women’s footwear.

He’s already checked a few things off that list more recently with the launch of the first Rhude shoe, in addition to a footwear collaboration with Puma. Then there’s the more recent tie-up with Thierry Lasry on eyewear. This all follows last July’s pop-in at Maxfield, which Villaseñor viewed as a turning point for the brand.

“I actually coined that as the beginning of this shift in our business,” he said. “Maxfield’s amplified our message. Doing a pop-up and executing the right way and it being a successful pop-up, our colleagues and competitors took us seriously and it became a new tone to the business. We had run under the radar for a little bit.”

Under the radar being relative considering Villaseñor — a physics student who graduated valedictorian at Taft High School in Woodland Hills, Calif. — struck gold in the beginning with his first shirt design: an allover bandana print worn by Kendrick Lamar. Today the brand is sold in retailers such as Kith, Union, Harvey Nichols, Barneys New York, LuisaViaRoma, Mr Porter, Nordstrom, The Webster and RSVP Gallery.

With a glut of streetwear brands — many fancying themselves in the luxury category — the buy-in from a retailer such as Maxfield and the platform it gave Rhude with the pop-up space was seen as key.

The Maxfield pop-in, Villaseñor said, exceeded expectations in the two weeks it was up. He boldly posited Rhude is at the forefront of a new age of men’s wear with the pendulum now shifting to more tailoring and formality. That comes with caveats, he pointed out. 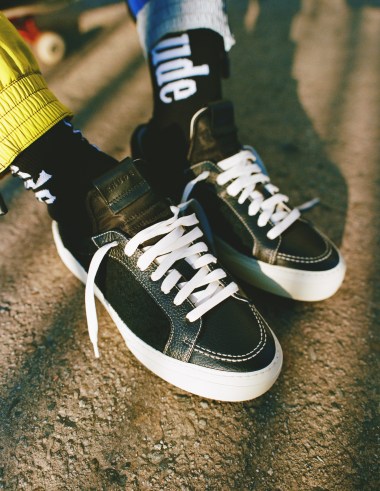 Rhude got into footwear for the first time with the launch of its own branded sneaker.

“The [men’s ready-to-wear] space feels stressed. There’s a lot of things repeating itself and it’s offering the same message,” Villaseñor said. “We can’t keep using the [streetwear] subculture as an obvious source of inspiration. There needs to be new energy. Now, with the Internet, everything’s so visible, it becomes tiring. So the evolution of men’s wear is it goes back to tailoring, but at a comfort level because once you feel something comfortable you’re never going back to the stiffness. I think every guy wants to look nice and professional at some point, but it’s tough because that business casual term is what’s going to become the new thing. What is the new business casual? It’s not wearing a cardigan.”

So what does he think it is?

More colorways of the Rhude mainline Italian-made footwear, which Villaseñor hopes will become a wardrobe staple, have already been developed, proving shoes was not a one-off toe dip for the business.

It’s the start of a more thoughtful approach to the line, one less reliant on collaborations, which Villaseñor said will slow after this year. There’s already enough on the plate of Rhude anyway.

Women’s is perhaps the most ambitious of those plans, with the company hoping to show in June in Paris.

It’s a market many men’s brands would not dare touch, especially not at such a young age given the competition, but Villaseñor believes he is ready.

“The men’s consumer is a very comfortable one. It’s an archetypal one,” he said. “I think men create their wardrobe completely. As a guy, I know what I want to wear. Sometimes I walk into a store and they say ‘We have this new so-and-so brand’ and I’m like, ‘No. No thanks.’ I know what I want. With women, there’s an opening in women’s wear because if you look at the Barneys floor, women are shopping the men’s floor more than ever. So I’m trying to challenge the company and the industry on the strength of women’s wear and we do have a say in what the Rhude girl will look like.” 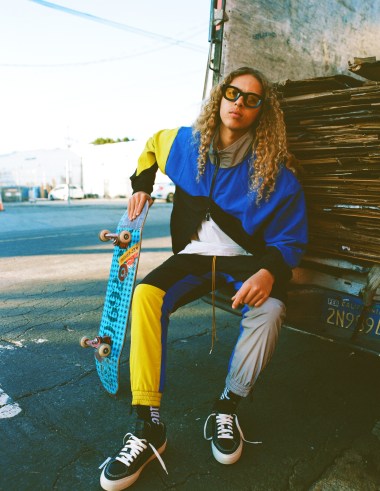 He asserts there’s a new perspective that can be born out of high-end streetwear that refuses to simply carry over the men’s silhouettes into women’s. Certainly women are wearing Rhude men’s hoodies, he said, but then pointed out: “That’s a very merch world kind of thing. I want to bring elegance back.

“The last thing I’d want to do is pull from what a man’s wearing. I think that gives less credit to a woman’s creativity like, ‘Oh, you walked out with your boyfriend’s clothes.’ Even the term, boyfriend jeans, I want to get that out,” he continued.

The faster the business grows, Villaseñor said, the faster Rhude can continue to expand into new categories. All of the new endeavors are being funded by the business’ profits with no outside capital involved. He said, at this point in Rhude’s life he’s open to it, but is nowhere near consideration of a sale. Plus, he likes business and doesn’t feel he’s reached his definition of success. In many ways, his response to what success is loops back to the numbers and formulas so familiar when he was a student of physics.

“I don’t think I’ll ever feel the contentment with the business because it’s a sport,” Villaseñor said. “I play chess a lot. I think mind power is such a beautiful thing. Numbers are numbers. Design is opinion based. It’s emotional. It’s artistic. But I’ll tell you this much: $1 is a $1. I used to be emotional when someone didn’t like a tone of black and you can be as emotional as possible, but not if the dollar isn’t equating to a dollar. So, to me, that is the most important thing: how do we have the same [view] as the kid that was making bandana tees in the garage to communicating that [design perspective] to the world?”