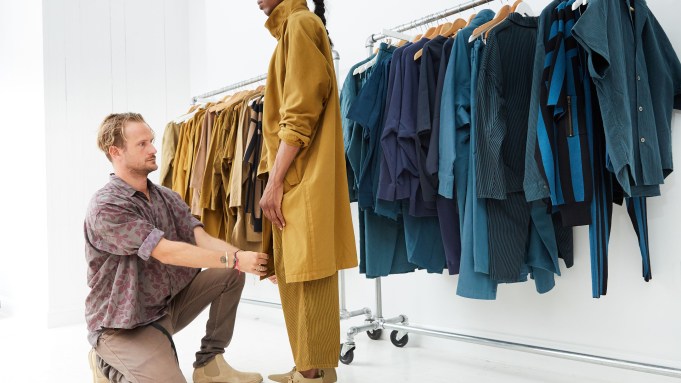 Robert Geller’s new brand, which he will unveil Tuesday with a show during New York Fashion Week: Men’s, may have a mouthful of a name – Gustav von Aschenbach – but that’s in direct contrast to its style, which focuses on casual, oversize silhouettes with few embellishments.

“In my mind, that’s where men’s wear is going,” he said. “It’s about silhouettes and ease.”

Geller said he’d been “thinking about silhouettes for a long time” and felt he was finally ready to branch out.

The general shape of the silhouettes is “quite round,” he said, and the pieces are all manufactured in Japan from Japanese fabrics and are “more simple than Robert Geller.” There are no prints or patterns — although a couple of pieces have stripes. Linens and linen blends with “some synthetics mixed in” provide a worn-in aesthetic. There are oversize T-shirts and sweatshirts, cowl-neck anoraks, softly tailored topcoats and utilitarian jackets, “light and breezy pants” and shirts in “crunchy” fabrics. Knit bombers and cardigans as well as a few oversize canvas bags and sneakers round out the offering.

“The details are so simple, so the silhouette is important,” he said. “I want it to be very accessible.”

He said the collection is “not scary,” and as a result, he believes “a lot of people will be able to wear it.”

But they may not be able to pronounce it. Gustav von Aschenbach was named after a character in the novel “Death in Venice” by Thomas Mann, which Geller said was “my favorite book through my teenage years.”

The name is also intended to distance the collection from his own eponymous line that he has been producing for 10 years.

“Finding a name is the craziest thing,” he said, noting that the trademark had to be available in a variety of countries, which Gustav von Aschenbach was. Asked if the name might be a bit of a mouthful for some customers, he said: “I’m sure everybody will just call it Gustav, and that’s fine.”

But while the name might wind up being truncated, Geller hopes the collection will lead to multiple sales. He produced 40 styles in five colorways — black, mustard, blue, green/gray and red.

“If you like the silhouette, you can get it in different colors,” he said.

He stressed that the collection is “something totally different” from the Robert Geller collection, which he will not show on the runway this season. “We’re going to show it in spring as see-now-buy-now,” he said. His namesake brand, which he partners on with Onward Global Fashion, has annual sales of around $5 million.

Geller, who was nominated for the Council of Fashion Designers of America’s men’s wear award earlier this year, graduated from the Rhode Island School of Design in 2001 and joined Marc Jacobs in New York as an intern before teaming up with Alexandre Plokhov to revamp the Cloak brand, a collection that would win the duo the Ecco Domani Fashion Foundation award in 2003 and a Vogue/CFDA grant in 2004. With his Robert Geller brand, he won the CFDA Swarovski Award for men’s wear in June 2011.

The Robert Geller line is a staple for retailers such as Bloomingdale’s and Barneys New York, and the designer is adamant that Gustav von Aschenbach is not a diffusion line, even though the pricing “sits where a diffusion line would sit.”

As a result, Geller hopes Gustav von Aschenbach will be sold “in the majors” as well as in the existing Robert Geller specialty store network. “Robert Geller sits on top and this will sit in the middle,” he said.

And while the two lines are quite different, they both have the distinct Robert Geller stamp.

“Robert Geller is very me,” the designer explained. “This is more open and for a broader audience.”

Since this is the line’s first season, he said he is “still figuring out how far to push it,” but he’s eager to get it out there.

“When I first launched Robert Geller after Cloak,” he said, “I felt like I had a secret and I couldn’t wait to tell the world. And I feel the same about this.”