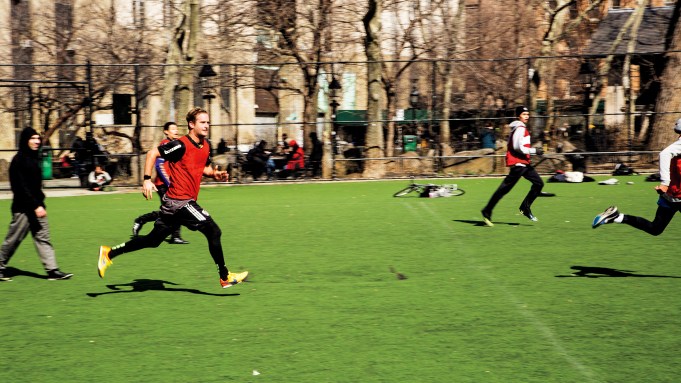 Every Saturday morning Robert Geller leaves his restored brownstone in Brooklyn to head to the Lower East Side for a pickup soccer game. His teammates include the expected models and photographers, but also men from industries far from fashion. And while they’re all friendly, they take the match very seriously.

During this day’s game, “Robbie,” as his friends call him, plays both goalkeeper and center and even scores the winning goal.

It seems to be a fitting exclamation point to the last few months for Geller, who is friendly and unassuming without a hint of bravado. His fall show during New York Fashion Week: Men’s in February was a standout of the season and further cemented his reputation as a leader of the next wave of American men’s wear designers. The collection offered a blend of updated business-inspired suits, roomy pants and dramatic outerwear capes.

While the men — and women — on the soccer field know he’s a fashion designer, to them Robbie is just an all-around good guy, an ex-pat who is the glue that ensures the game takes place each week. Their affection for him is obvious in the way that they tease him when a photographer shows up to get some action photos. “That’s the cover shot,” they exclaimed as they celebrated Geller’s winning goal.

His affinity for “football” was ingrained in him at a young age. Born in Hamburg, Germany, the 39-year-old designer moved around a lot during his youth, living in Europe and the U.S., attending international schools. For college, he chose the Rhode Island School of Design.

The son of a photographer, Geller initially considered the same career path, but after his freshman year at RISD, he realized he “wanted to give fashion a shot. So I put my head down and worked to catch up to the rest of the students” who already had a head start.

It worked. Geller rose to the top of his class and was chosen as an intern by Marc Jacobs in 2001.

That experience was transformative for Geller for a number of reasons: not only did he learn real-life lessons of what it means to be a fashion designer by working alongside Jacobs and Richard Chai, but he also met his future wife, Ana Beatriz Lerario, a Brazilian who was an assistant designer at the company. They now have three daughters.

“It was like finishing school,” he said of his time at Marc Jacobs. “I had learned to sketch and make patterns, but now I learned how the business worked.”

It was also where he met Alexandre Plokhov, who was working there as a patternmaker. “We met in the kitchen over lunch and got along well. We had similar interests.”

Plokhov had started a brand called Cloak, but had put it on hiatus due to a lack of financing. Together the two cooked up a plan to revive the label as partners. “I took the money I had saved up and Alex put his money in and naïvely, but with great hope, we relaunched Cloak,” Geller recalled.

The line, which blended Plokhov’s goth aesthetic with Geller’s European romanticism, was a success, landing in Maxfield; Louis Boston; Isetan; Barneys New York, and other influential retailers. Cloak won the Ecco Domani award in 2003 as well as the Vogue/CFDA Fashion Fund grant in 2004 and quickly developed a cult following among fashion influencers.

“That blew my mind,” Geller said of the awards. “But there was not a lot of men’s wear being made in New York at that time and Cloak hit a nerve” with its blend of music, darkness and romantic influences.

But reality soon set in and in 2003, Geller and Plokhov parted ways after the fall 2004 collection was completed. Although fashion industry lore says the split was acrimonious and the two didn’t speak for years, Geller is too much of a gentleman to go down that path, saying only that there are moments of conflict in any business relationship. And the two have apparently mended fences: Plokhov sat front row at Geller’s show in February.

“We weren’t able to turn [Cloak] into a financial success even with all the awards we won,” Geller said. He learned the hard lesson that producing a collection that is commercially successful requires a lot of financial outlay. Banks are wary about lending small fashion brands money, designers are on the hook for buying fabric and producing the goods and then stores ask for 60 to 90 days to pay.

“There’s a huge discrepancy of cash flow,” Geller said. “It’s really difficult to balance and I didn’t have the heart to keep going into serious debt at 26 or 27 years old.” (Plokhov kept the line alive until 2007. He operated a label under his own name from 2011 through the end of 2015.)

As Plokhov pushed on with Cloak, Geller took a different path and created a women’s line called Harald. The collection was another success and caught the attention of the Japanese company So Inc., which offered to bankroll the designer to create a men’s wear brand under his own name. He negotiated to ensure that he would retain the rights to the Robert Geller name and creative control of the collection and then happily accepted the partnership, allowing So Inc. to “take care of the things I’m not good at.”

The Robert Geller collection launched for fall 2007, offering up a 70-piece assortment that he showed at a rented space in SoHo. The line was picked up by around 10 specialty stores, including Fred Segal.

Geller was careful to make sure his own collection was distinct from Cloak and its dark military aesthetic, injecting his brand with a “sense of romance,” a strong color palette and unusual textures.

“I didn’t want it as dark as Cloak. That had its moment. I said, ‘Let’s do Robert Geller.'”

In 2009, Geller received further plaudits when he won the GQ/CFDA Best New Menswear Designer award. The timing was fortuitous: The announcement came two days before the designer’s runway show where “twice as many people showed up and there was a real buzz around the brand.”

That buzz continued to build and in 2011, Geller won the Swarovski Award for top men’s designer.

The line has sales of around $5 million a year, according to sources.

“It didn’t happen overnight,” Geller insisted of his success, “but it all adds up.”

Kevin Harter, vice president of fashion direction for Bloomingdale’s, said he is a “huge fan” of Geller’s designs. “He really possesses a unique vision on men’s wear and he’s two to three seasons ahead of everyone else. He’s a barometer of what’s going to happen. I see what’s selling from him and I know that will resonate with our customers in the future.”

Geller believes it’s his blend of European and American influences and the “protectiveness and layering” that he infuses into his collection that speak to customers.

But it’s also his sense of romanticism that brings his work to life.

“Romance is hard to describe,” he said. “But I believe in love and being good to each other and creating beautiful things.”

At the same time, Geller said he doesn’t like things that are too “polished” and commercial.

He still works out of a multibrand showroom in TriBeCa and his team is small. Even so, he believes he’s “growing up as a designer and getting better at it.” He admits that he still finds it hard to create a cohesive 120-piece collection each season that satisfies both runway and retailers. But the process has been helped of late due to a change in backers that has allowed him to produce updated shapes, add embroidery and offer prints that he never did before.

His relationship with So Inc. ended in 2011 and he moved to Onward Global Fashion, the large Japanese company that owns the J. Press business in the U.S. “This is a great home,” he said. The company is “big-time and it feels secure. They let me do what I want.”

Geller points to designers such as Raf Simons and Dries Van Noten as among his favorites, calling Van Noten his “hero” for how he has built his business slowly and deliberately. Geller also wants to keep things “controllable.”

He eventually hopes to start a women’s collection, open freestanding stores in key cities such as New York, Tokyo, Berlin, London and Paris, and launch e-commerce.

“But I don’t want to be the boss of 100 people,” he said. “I don’t want to spend my time managing people. I just want a small design team, a nice office and to make beautiful clothes.”