Salvatore Ferragamo’s One Night in Florence

Paul Andrew opens up about the status of the men’s fashion industry and gives WWD a preview of his first runway show as creative director of the Salvatore Ferragamo men’s line.

FLORENCE — “I think that, in general, men’s wear is in a pretty bad position right now. When you enter the luxury stores around the world, what you find is only hoodies, sweatpants, T-shirts and an overabundance of logos. Streetwear is still very prominent, but the world is changing. I expect a cross-pollination between the different worlds and I believe that tailoring should be done in a way which takes care of comfort and ease. That is what makes sportswear and streetwear so appealing.”

With those few words, creative director Paul Andrew summed up his mission at Salvatore Ferragamo: refreshing the heritage of the brand and translating it into a language that feels modern and appealing for younger generations of customers, while maintaining the elegant, luxurious standards of the Florentine fashion house.

The men’s collection that he will show on Tuesday in Florence marks a further step on his challenging path. 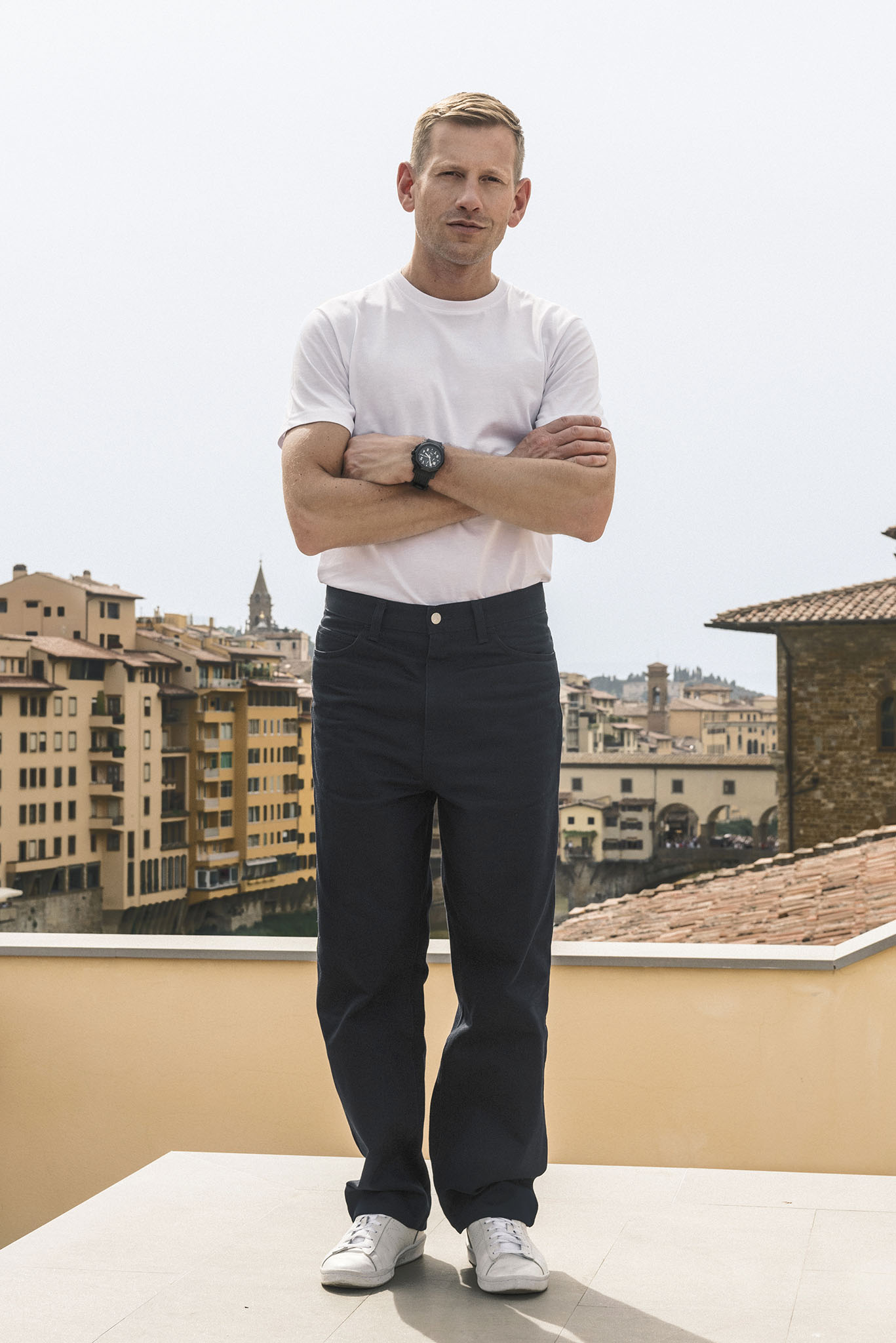 In the year that marks the 30th anniversary of Pitti Uomo, the fashion company decided to show Andrew’s latest men’s collection in one of the world’s most iconic settings: Florence’s Piazza della Signoria, which houses the Uffizi museum as well as the Fountain of Neptune, which has just been restored thanks to the generosity of the Salvatore Ferragamo firm.

Celebrating the show’s special location, Andrew developed a print featuring illustrations of the splendid fountain, which he splashed on both ultra lightweight cottons and on lace for a bold effect.

During the interview, Andrew stressed the importance of the company’s signature artisanal craftsmanship in the development of the collection, which contains charming textures, luxe materials, and a color palette that includes warm tones of orange and saffron juxtaposed with shades of purple and fresh greens.

For example, supple leather, a foundation of Ferragamo’s heritage, takes center stage in the lineup. It is glossy on slim pants matched with sophisticated knits in Mediterranean colors, while it’s embossed and waxed to obtain a canvas-like texture on separates. Another of Ferragamo’s signature materials, straw, is paired with rubber on an aqua-green loose jacket, while tailored suits, mainly left unlined, are crafted from a range of different materials, from unexpected rip-stop and woven hemp to silky fabrics enriched with iridescent effects. 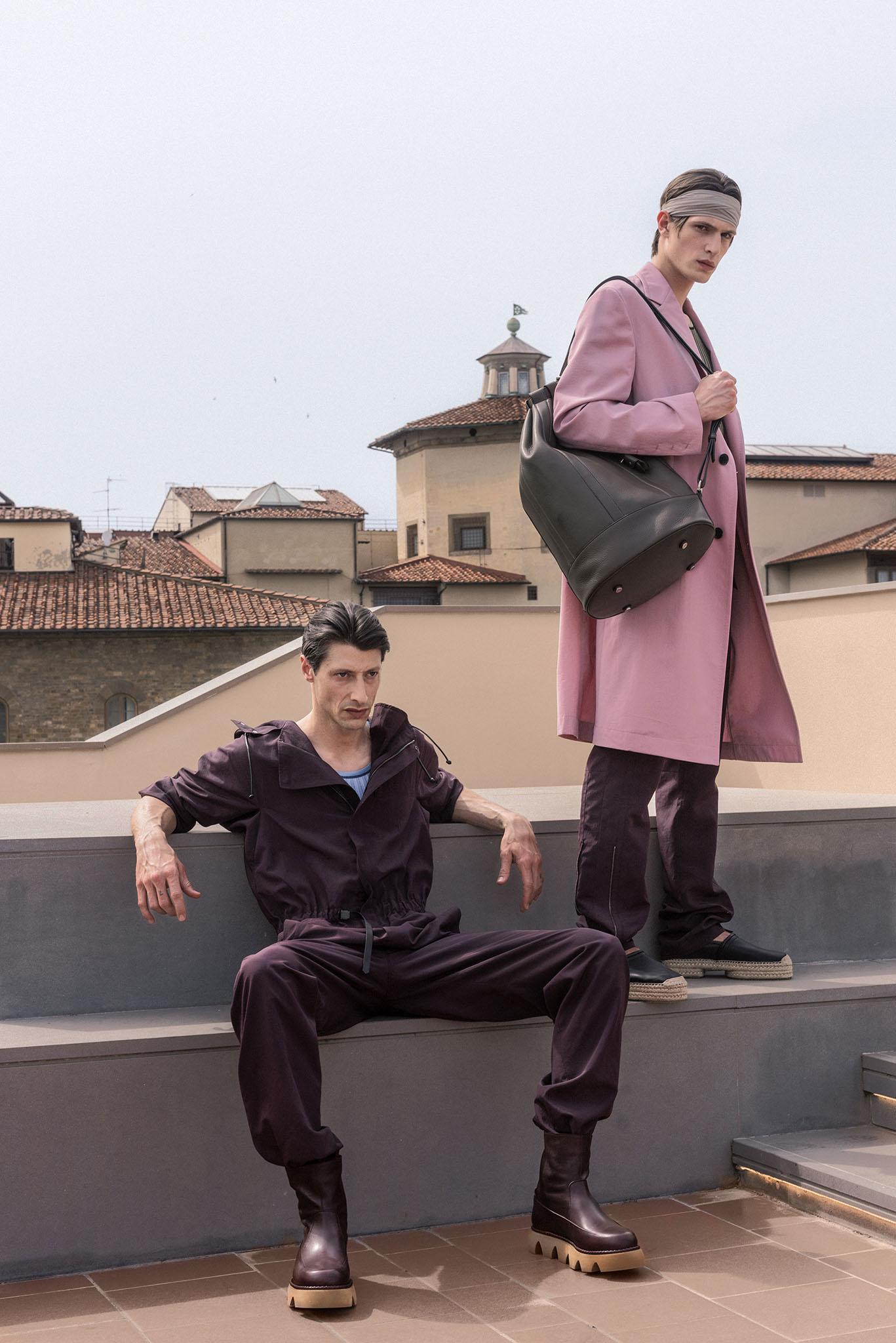 Workwear inspired both the cool, roomy jumpsuits and field jackets, but also gives a distinctive look to the more sartorial suits, sometimes decorated with zippers around utility pockets and high-tech, sporty details, such as adjustable drawstrings.

“Since I started here as creative director, I have been very focused on keeping men’s and women’s together. In the past, I think the image of the brand was a bit schizophrenic. But now I think the identity is very clean, and when you look at men’s and women’s you really have the feeling they are in the same world,” said Andrew, explaining his decision to create 10 special women’s looks specifically for the show. They include special handmade pieces that were inspired by the embroidered raffia of a Ferragamo shoe from the Thirties, as well as an intricate top crafted from interwoven silk chiffon in the collection’s signature Fountain of Neptune print.

Andrew also looked at the archives to find ideas for new footwear styles. Cool sandals celebrate Ferragamo’s signature Kimo style with the detachable suede sock, while a women’s Forties shoe was reworked to create a leather footwear design featuring a sculptural sole crafted from rubber injected with air for a lightweight effect.

The brand’s craftsmanship also resulted in the wide range of bags, spanning from weekenders in a patchwork of leather and suede to the urban tote with extendible handles and elevated sailing bags.

“I feel that I don’t go for a very specific type, also because if you visit our stores globally, we dress people in their 20s up to their 90s,” said Andrew, when asked about the target customer of the collection. “We are actually addressing all the different generations and you will see this in the casting, which is very diverse. There is someone who is 17-years-old and other men who are almost 70. I can reveal that there will be guys that you haven’t seen in a while.”