The designer will show his first full collection on June 22, which will include fall and spring looks.

Sander Lak with a look from his first full collection.

NEW YORK — Reserved, quiet, unassuming. These are words that would never be used to describe Sander Lak.

Instead, the creative director of Sies Marjan is upbeat, engaging, smart, sophisticated — and talented.

Lak, a former designer for Dries Van Noten, is the engine that has propelled the three-year-old brand squarely into the fashion spotlight. His romantic and colorful women’s wear is carried at some of the most discerning retailers around the world, including Barneys New York, Bergdorf Goodman, Ssense, Matches, Browns, Harvey Nichols, The Webster and so on.

One year after launching his women’s collection in 2016, the Dutch designer dipped his toe into the men’s arena, offering up a capsule with a similar sensibility that immediately took hold. And this week, Lak is going all in, showing his first full men’s collection on the runway during Paris Men’s Fashion Week.

Although Lak, who also worked with Balmain in Paris and Phillip Lim in New York, was trained as a men’s wear designer at Central Saint Martins, this is the first time he’s truly spreading his wings in the men’s arena.

Interestingly, Lak’s foray into men’s came as a result of creating pieces for himself that were not offered for sale. “It’s hard for me to see people propose certain clothes to the world and then they’re wearing a sweatshirt,” he said in an interview in his sunny showroom on 26th Street here, a space that had formerly been home to Ralph Rucci. Sies Marjan is owned by Deia LLC, a company bankrolled by billionaires Nancy and Howard Marks. Nancy Marks was Rucci’s former partner and her husband is cofounder of Oaktree Capital Management.

In creating his men’s collection, Lak took the colors and aesthetic of the women’s collection and “applied the formula to myself as a way to represent the brand and not have to wear other designers.”

These masculine interpretations of his women’s line quickly caught the eye of the retailers who were buying the women’s collection. “They loved the one-offs and kept asking where they could get it for their husbands or boyfriends,” he said. “The conversation got so big and I felt I really needed to do it.”

His instinct was to create a full-blown men’s wear offering, but instead, he opted to test the waters with the capsule first. “It was hard to hold back,” he admitted. “I was like a drug addict in a drug store.” But he admitted that it may have been for the best.

“I love limitations, they really make you push yourself to be the best you can be,” he said.

Customers obviously felt he’d nailed it. “It sold incredibly well,” he said of the capsule that was offered in November of 2017. “And the brighter and more colorful it was, the quicker it sold. So we said, let’s do a full men’s wear range.”

The men’s wear, which has since been slowly expanded, is sold at only a few of the right high-end stores. “We were very selective,” Lak said. “We wanted to keep it tight and have people discover it. But now that we’re doing a full men’s collection, we’re taking it very seriously as a company. This is not just, ‘Sander wants some clothes.’”

Speaking as a customer, he said, “This may sound self-centered, but it’s about what I need and desire but can’t get. That idea was the starting point.”

Lak said his personal wardrobe tends to be casual yet sophisticated and it’s this aesthetic he seeks to offer in his men’s range.

“I don’t wear streetwear — it’s great, but I don’t spend money on that or on beautifully constructed tailoring,” he said. “It’s the middle ground that I feel is undernurtured and that I can’t find out there. Street is such a wide term now and there will be an element of ease to [my collection] but it’ll also be sophisticated and high-end — sort of the day version of a Brioni suit. That’s what we do for women’s wear as well.”

Lak, who is the son of an oil industry executive and has lived all over the world, first set out define “what makes it Sies Marjan,” he said. And then he created pieces that he hopes customers will find irresistible. “There’s so much competition out there and people really don’t need what we put out. So how do we get them to need it?”

One way is to make an emotional connection by offering a clear vision, something that is essential “when you’re a newish brand and on the same playing field as the big boys with 50 times the budget. So I say, fake it ‘til you make it,” he said.

The collection he’ll show in Paris on June 22 will “connect with the Sies Marjan woman,” he said, adding that he sees many similarities between the customers for each. “I don’t look at it as the Sies Marjan girl and the Sies Marjan boy, but the brother and the sister, or even the same person,” he said.

But Lak knows that it’s actually easier to make a mark in men’s wear. “The boundaries are very different,” he said, “and it takes a much smaller gesture to shake up men’s wear. With women’s, it takes a lot more to move the needle.”

He didn’t want to give too much away about the inspiration for the first full men’s collection, but did offer a few tidbits. The show will be a combination of both the fall and spring collections, even though fall has already been seen and purchased by retailers. And it will be “connected” to the women’s fall collection since he sees the collection as “fishing out of one pool.

“It’s going to look extremely Sies Marjan,” he continued. “And will be a continuation of what we built. It’ll be a combination of two seasons in one expression.” The fall collection will be available for purchase right after the show. 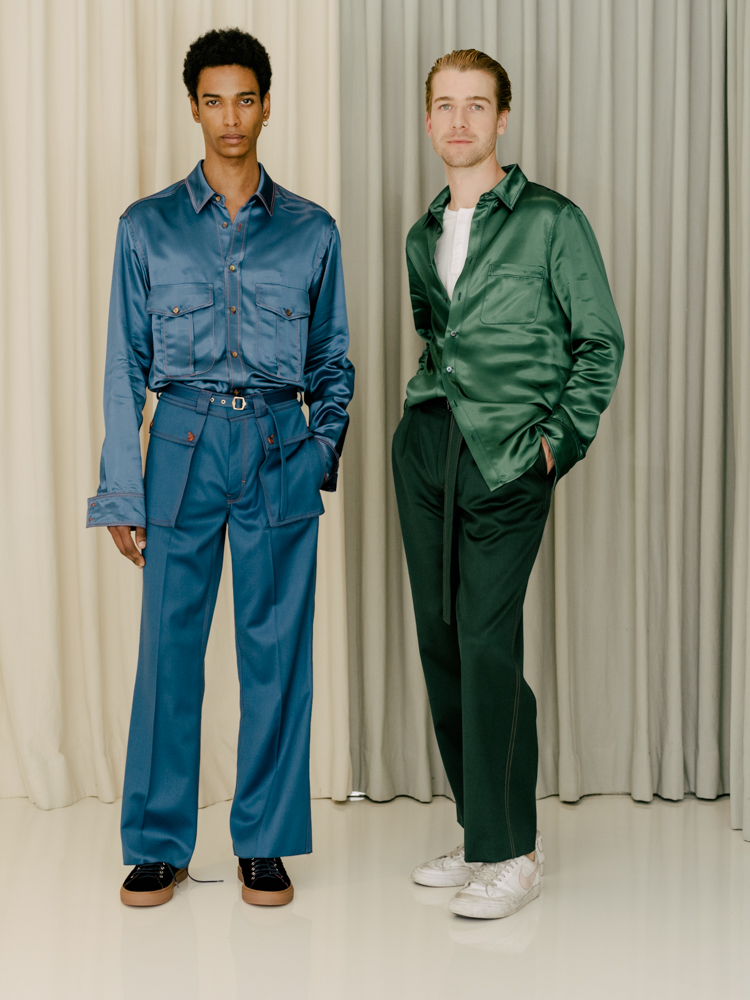 Sander Lak with a look from his first full collection.  Daniel Dorsa/WWD

The men’s collection will also undoubtedly have the flavor of several cultures, much like the designer himself. Born in Brunei and raised in Holland, he’s lived in Malaysia, Gabon and Scotland. He said living in so many places “makes you very flexible. I understand things quickly because I’ve seen so many versions. It’s the kind of real wealth of information that only happens when you travel a lot.”

But there are times that his journeyman life makes him feel a little out of place. “I sometimes feel lost,” he admitted. “If I was based in one place, it would be simpler.”

And perhaps New York is that place. “I’ve always liked New York, I loved it as a child and I’ve lived here before so it’s not unknown territory.”

In fact, for this go-round, he’s now lived here for 4 and a half years — he moved to Manhattan in 2015 to lay the groundwork to launch Sies Marjan. “But it takes 10 years until you can call yourself a New Yorker, right,” he said with a laugh. “Well, six years to go.”

Turning serious, he said that although he’s worked in all the major fashion cities including Paris, Milan and London, he believes New York was the best place to start a new label. “The idea of ambition and starting and building a business is celebrated here,” he said. “You don’t have that in the other cities.”

He also cherishes the fact that his company is private. “There’s great flexibility being private and small,” he said. The Marks were patient and gave him a year to create the brand, hire the team and come up with a name. Sies was his father’s name and Marjan is his mother’s. “I didn’t want to name it after myself, but it’s still personal,” he said, adding that his father has passed away but his mother is still alive. “My mom is now carrying the weight [of the collection,]” he said with a smile.

She’s undoubtedly proud of what her son has accomplished, both in terms of creativity as well as business acumen.

Lak said that in addition to the design, he enjoys working on all aspects of the brand. “I trained as a designer in Europe, which sounds slightly pretentious, and I have a certain taste level. Clothes are still my passion but I need the other stuff to be excited about. It gets kind of repetitive if you just make pants, skirts, jackets, pants, skirts, jackets. I have a bigger picture mentality.”

The team has grown to 38 people and is a buzzing machine of creativity. “It’s been really hard but also amazing,” Lak said of the brand’s progress in such a short time.

And now it’s men’s wear that is his immediate focus.

“Men’s wear is in a very interesting state today,” he said, “and we have streetwear to thank. The accessibility of high-end men’s wear is so much broader today and there are so many layers. It’s time for us to have a seat at the table.”