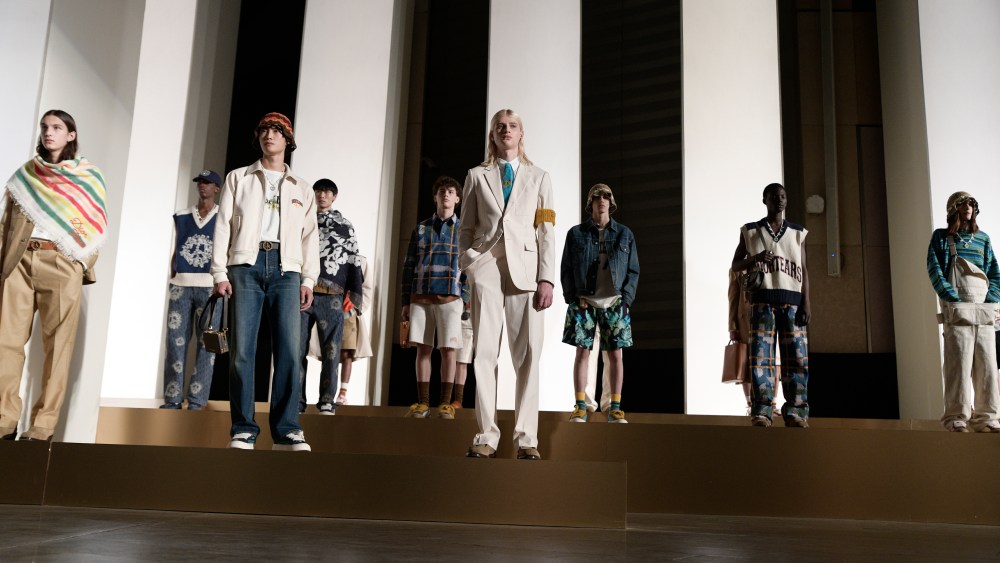 CAIRO, Egypt — Talk about an appetizer.

Dior demonstrated its clout by hosting a preview event for its pre-fall menswear show, due to be staged in front of the pyramids of Giza near Cairo, at the brand-new Grand Egyptian Museum.

The French fashion brand unveiled Dior Tears, a capsule collection guest designed by Denim Tears creative director Tremaine Emory, in a presentation on Friday night staged in the grand entrance hall of the imposing building, dominated by a towering statue of Ramesses II.

Kim Jones, artistic director of men’s collections at Dior, has known Emory since 2005 and both have risen to become major figures at the intersection of luxury men’s fashion and streetwear.

During his tenure at Louis Vuitton, Jones orchestrated what was seen as a watershed moment for the industry by collaborating with Supreme, and Emory was recently named creative director of the cult New York skatewear brand.

Jones had been looking for an opportunity to work with the Atlanta-born designer, who is known for telling stories about the African diaspora, and promoting racial justice and cultural activism through his designs.

“I said, well, it’d be nice on the continent of Africa to have you involved somehow, and it’s the first time we talked about working together that it seemed like everything clicked into place,” the Dior designer said in a preview.

“He was looking at the Cairo scene back in the ’50s and ’60s, and the importance of jazz, and then that cross-reference with America, and came with a brilliant research that then we developed for him with his team. For me, it’s a really beautiful look at a moment in time, which is kind of the golden age of travel,” Jones added.

The collection was inspired by Black artists and creatives like writer James Baldwin and jazz trumpeter Miles Davis, who were celebrated in Europe in the 1950s even as segregation raged back home in the U.S.

“It wasn’t perfect but it was just a moment, a beautiful moment for Blacks to have the privilege and opportunity to escape from the terror, the horrors of America, a segregated Jim Crow America,” Emory said in a statement.

At the end of the presentation, fashion editors mobbed the models standing on podiums for a closer look at the clothes. That Emory could trigger such excitement even in his absence is a signal that this line will have hypebeasts on red alert.

Jones said he wanted to stage a spinoff event for the capsule collection to make a bigger statement. “There were two very different messages and I feel if we’re bringing people all the way here, we should give them more than they expect,” he explained.

“Aladdin” star Mena Massoud, who was born in Cairo and emigrated to Canada at the age of three, was proud to be back in his home city for the occasion.

“It’s such a beautiful place. We’re obviously here at the Grand Museum, which is the largest [archeological] museum in the world now. It’s taken years and years for them to build it out,” he said of the venue, which has yet to open officially to the public.

“I think Cairo goes very under the radar for things like this, and we’re at such a big cultural art hub that more fashion houses should come here and do their shows,” added the actor, whose new movie, “Hotel for the Holidays,” was released on Friday.

In it, he plays a chef called Luke opposite “Riverdale” star Madelaine Petsch. It turns out Massoud is no slouch in the kitchen in real life. “I published a cookbook back in 2020 and I have a travel food show coming out next year called ‘Evolving Vegan,’ so I like to think I’m pretty good,” he said.

Thomas Doherty, who was on his way to Egypt as season two of the “Gossip Girl” reboot hit screens on Thursday, was busy soaking in the scene at the museum.

“It’s insane. It’s such a privilege. I mean, I feel very, very lucky and it’s absolutely magnificent,” said the Scottish actor, who plays Max Wolfe on the show. “This is my first time in Egypt and it’s a culture shock, but it’s really beautiful. The people are really special, the food is amazing. I’m also very jet lagged, so I feel like I’m in a bit of a dream right now.”

But don’t expect him to star in a remake of “The Mummy.” It turns out Doherty has another franchise in his sights. “Listen, you know what, they’re casting the new James Bond soon, so…,” he said, letting the sentence hang in the air.