Stella McCartney Lets the Sunshine In for Spring Collections

"We’re in the battlefields and fully fighting for the planet, for the animals," said McCartney. "We're activists, and we don’t give up." 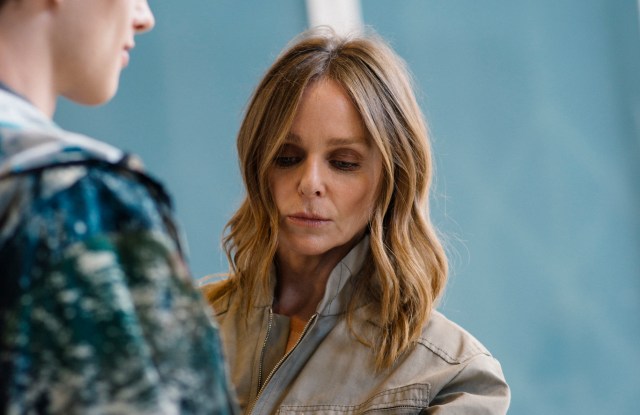 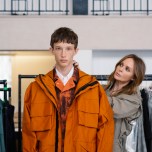 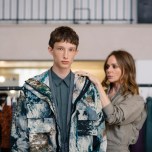 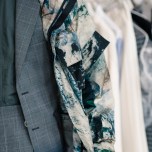 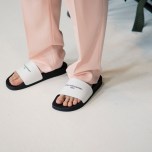 LONDON — Stella McCartney is serving up sustainability with a smile for spring, offering men’s and women’s collections that embrace earth and sky and showcase the philosophy and handwriting of the novelist and nonfiction writer Jonathan Safran Foer.

A benevolent-looking sunburst surrounded by clouds and blowing a big gust of wind is the leitmotif in a capsule that’s part of the men’s spring 2020 and women’s resort collection. The sun — hand-drawn in McCartney’s design studio — glows and blows the front of an oversized, chunky knit. Above it are the words “We Are the Weather,” which also is the title of Safran Foer’s upcoming book.

The same sun appears as a sketch on lightweight puffer coats, organic cotton dresses, jumpsuits and T-shirts. McCartney’s favorite phrases from Safran Foer’s book, such as “Saving the planet starts at breakfast,” or “Our Planet is a farm,” have been embroidered onto tailored suits or appear — in the author’s own handwriting — on other pieces.

The natural world doesn’t end there: A hand-painted horse print gallops across both collections, while an aerial photograph of Earth appears as a print on a long anorak and leopard spots pop on a faux-fur coat.

Safran Foer’s latest book, set to be released in September, is a nonfiction look at the everyday sacrifices needed to save the planet, and a call to collective action. McCartney said she and Safran Foer became friends after she read his 2010 book “Eating Animals,” a look at vegetarianism, farming and food.

Fear not, meat eaters, leather lovers and frequent fliers: The collection is not a diatribe against environmental waste, nor is the tone Doomsday-ish. Just the opposite. The designer knows that green shoots take a while to grow and McCartney is fine with that. She’s so at ease that she’s dubbed the resort collection “Force of Nature,” and the men’s spring outing “Eco Weirdo.”

“I think that’s important to take on board that we are still weirdos to the majority of the world, and we are fine with that. I am fine with being a weirdo, and it will probably never change,” said the buoyant designer during a walk-through of both collections, which she described as “equal partners in crime” and made for the same person.

McCartney said this season is different from past ones as she wanted to work her passion for nature preservation into actual designs, and embrace everything that her company stands for in the fashion industry.

“Hopefully the collection is joyous and approachable and not preachy and depressing. It’s still keeping the lightness of our tone of voice, and the touch is always humorous and hopeful. We never want to take ourselves too seriously and we are very much about providing a solution and being honest and real about our imperfections.”

She said having a sustainable outlook is not about “beating yourself up, or feeling panicky. It’s basically gestures that make change. Yes, you can eat meat, and yes you can preferably give it up one day a week.”

More than 60 percent of McCartney’s collections are made from sustainable materials. The designer has been at the vanguard of environmental profit and loss accounting alongside luxury goods giant Kering. Every year McCartney’s company takes stock of its footprint, and works on ways to reduce its impact. McCartney plans to continue auditing her company in this way even after it separates fully from partner Kering in 2020.

For the spring collections, McCartney has also worked with organic cotton, regenerated cashmere and nylon and sustainable viscose — a material that’s been three years in the making. Bags are made from eco-friendly Alta napa leather while PVC is nowhere to be found. Since 2010 all products — both from Stella McCartney and from the brand’s collaboration with Adidas — have been PVC-free.

McCartney said she always starts her collections thinking about the soil. “It is not just about the organic cotton, it is about going one step deeper — how are farmers treating the soil? How are they putting the nutrients back in?” said McCartney.

“It is a big conversation with whoever we want to work with. Animal welfare is first and foremost. How do the animals live in their environment? At the end of the day, fashion is farming and it is raping the environment.”

While the overlap with women’s is big, the men’s collection skews more in the direction of soft-edged tailoring, with standouts including a boxy, double-breasted dusty rose suit with contrasting black buttons, a Prince of Wales check one overlaid with animal spots, and a magnified houndstooth one.

There are dip-dyed utility pieces and lightweight outerwear with big flap pockets in solids like burnt orange or printed with the aerial photo Earth print. Knits are made from regenerated cashmere and come in solids, dip-dyes or “Where’s Wally?” cartoonish stripes.

McCartney said she’s returning to Milan for a number of reasons: because there are so many Italians in the company, because the company produces there and because she’s eager to check in with the sales teams who’ll be working during the men’s shows. “Italy is a big market for us, and hopefully the weather is going to be way better than here. Follow the weather! We are the weather,” she said.

The venue is on Via Cappuccio in the courtyard of a private palazzo not far from the church of Sant’Ambrogio.

Asked about the separation from Kering and how it’s progressing — McCartney’s longtime chief executive officer Frederick Lukoff has recently left and been named to a similar role at the Dutch company Scotch & Soda — the designer said she is forging ahead.

A successor to Lukoff will be revealed in due course, while industry veteran Caroline Deroche Pasquier has recently joined from Coach as chief marketing officer, succeeding Stephane Jaspar.

“There’s a lot going on, and we’re doing great. We’re in the battlefields and fully fighting for the planet, for the animals. We’re activists, and we don’t give up at Stella McCartney. The team is on fire, and we couldn’t be more invigorated as a brand internally. And the world seems to be ready for us.”