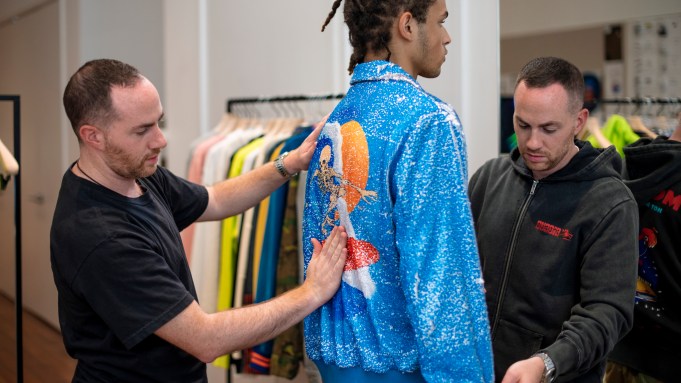 It was a chance meeting with Ralph Lauren at the Double RL store in East Hampton, N.Y., that forever changed the lives of Ariel and Shimon Ovadia.

The twins were browsing through the store one day when they spied the legendary designer. Although too shy to approach him, their stares caught Lauren’s attention. He asked them if they were “in the business,” and they said, “No, but we want to be.”

Lauren then spent the next hour telling the brothers his life story and how he had created his fashion empire.

Starstruck, the Ovadias decided a month later to start down the same path and launch their own brand.

In the seven years since, the brothers, now 35, have proven that the journey they started that day was the right one. Today, the Ovadia & Sons label is carried in Barneys New York, Neiman Marcus, Saks Fifth Avenue and other upscale department and specialty stores in the U.S. They have collaborated with everyone from Levi’s, the Gap and J. Press to street artists and the estates of legendary figures such as Bruce Lee.

Next up is an expansion to eight countries along with an e-commerce relaunch and the entry into new categories such as swimwear and bags.

The business has doubled for the past two seasons, going from 34 accounts to more than 100. “Things are going well, but we’re never satisfied,” Shimon said.

Ariel attributes the success of Ovadia & Sons to their unwavering determination to succeed. “We have a fire burning and a mind state that we can’t fail,” he said.

Of course it helps that they had some firsthand exposure to the apparel industry growing up. When their family relocated to the U.S. from Israel, they were too poor to afford their own home immediately, so they moved in with their grandmother for three years, they said.

Their father, Moshe, who was a professional soccer player in his homeland, found his way into the garment industry. He started a business called Magic Kids that manufactured private-label goods for mass-market retailers including Walmart and J.C. Penney.

“Our dad asked if we wanted to be doctors or lawyers. We said ‘no,’ so he said, ‘OK, you’re going to work for me,’” Ariel said.

The boys toiled in the company’s warehouse “doing physical labor,” Ariel said. “Nothing was given to us. When we started the day, we never knew when we were going home. Our dad groomed us to work hard and never take anything for granted.”

It was a lesson well-learned.

“We’ve had that drive from the beginning,” Ariel said. “And it’s stronger than ever today. We know a lot of designers don’t think this way, but we know you can’t just make cool stuff, you also have to turn it into a commercial success.”

When they started Ovadia & Sons — its very name a nod to their father — they admitted they “had no idea what we were doing,” Ariel said. They had no design experience and no office. A friend allowed them to use a space in Greenwich Village to set up shop, but the location didn’t have air conditioning or a bathroom. When buyers visited, they said both were broken.

“We had no business plan, no financing,” Shimon said. “We just jumped in because we had a passion for creating great product.”

Their first collections were heavy on tailored clothing and furnishings. “We fell in love with Savile Row tailoring and hunting clothes,” Shimon said.

It’s no surprise then that J. Press, the Ivy League-inspired brand, tapped the brothers to design a more-youthful take on its collection under the York Street moniker. That partnership lasted for four seasons.

As their business grew, the Ovadias found that what they were designing was resonating with customers and this gave them the opportunity to branch out.

“As things got more relaxed, the brand just naturally evolved,” Ariel said. “And we had all this rock ’n’ roll, vintage and military stuff in our closet.”

They started injecting more of that into the collection at the same time that their customer began embracing such trends.

“In today’s world, you have to understand what value you can provide,” Shimon said. His brother added: “When we started, it was rare to see people wearing cool clothes, but now the men’s business has just taken off.”

Today, the brand is best known for its outerwear, cut-and-sewn hoodies and sweatpants, printed shirts and track pants. They also offer Ovadia+, an active-inspired collection. “We always look at what we want to wear,” Ariel said.

That will be the case on Tuesday morning when they unveil their spring 2019 collection. This time, however, they will break with their tradition of showing on a runway and instead host a “preview” for press and retailers. The event will be accompanied by a digital film that was shot in Montauk.

“We’ve been doing shows for four years and we wanted to switch it up and challenge ourselves,” Ariel said. “We live in a time when the traditional way is not necessarily the right way. This is a way to connect more intimately with editors, buyers and friends of the brand.”

Over the past seven years, Ovadia & Sons has developed a cadre of friends, including Neil Patrick Harris, Kevin Durant, Victor Cruz, Big Sean and others.

Their first move into the collaboration market was in 2017 when they teamed with Steven Harrington, an L.A.-based artist known for his contemporary California psych-pop aesthetic. Earlier this year, they created a line of Sherpa-lined trucker jackets with Levi’s Authentic Vintage as well as a GapFit/Ovadia+ activewear capsule with The Gap.

Coming this fall will be collaborations with the estates of Elvis Presley and Joe Strummer of The Clash as well as Social Distortion — “figures or characters we love,” Ariel said.

At the event on Tuesday, they will show off their latest collaboration with Stanley Mouse, the artist best known for his 1960s psychedelic rock concert poster designs for The Grateful Dead and others.

“We’ve been fans of his since we were teenagers,” Shimon said. Now 77, Mouse, whose real name is Stanley Miller, allowed the brothers to dig through his archives and created some art pieces specifically for the collection. His colorful skeleton on a surfboard illustration will be used on everything from sequined bomber jackets to hoodies.

Also new this season is their first line of bags designed with Porter, another long-time favorite of the twins.

Outside of the official collection, they revealed they are also working with the estate of Bruce Lee and have created a capsule collection with his images and a reference to the karate school he founded.

All of these projects have necessitated Ovadia & Sons expanding the back end of the business. Today, there are 20 people on the payroll and a four-person office in China, and they’re actively searching for a president to join the team. “We’re getting close,” Shimon said.

Until that time, the brothers continue to oversee everything themselves, with Ariel focusing more on production and Shimon managing the creative. They both do the designing. “We’re still a small brand,” Shimon said.

That may change next month when the brand will enter eight overseas markets including Germany, Qatar, Sweden and Belgium in retailers including Gate Berlin, Galeries Lafayette in Qatar and Harvey Nichols in Hong Kong.

Looking ahead, the brothers remain realistic in their goals.

“We want to do what we’re doing bigger and better,” Ariel said.

That means building on the solid relationships they have already established in the U.S. at the same time as they expand internationally.

And eventually, they hope to open their own retail store.

“I always tell Ariel to shoot for the moon and the stars and grab what you can on your way up,” Shimon said. “We’re just getting started and we continue to push ourselves every day.”