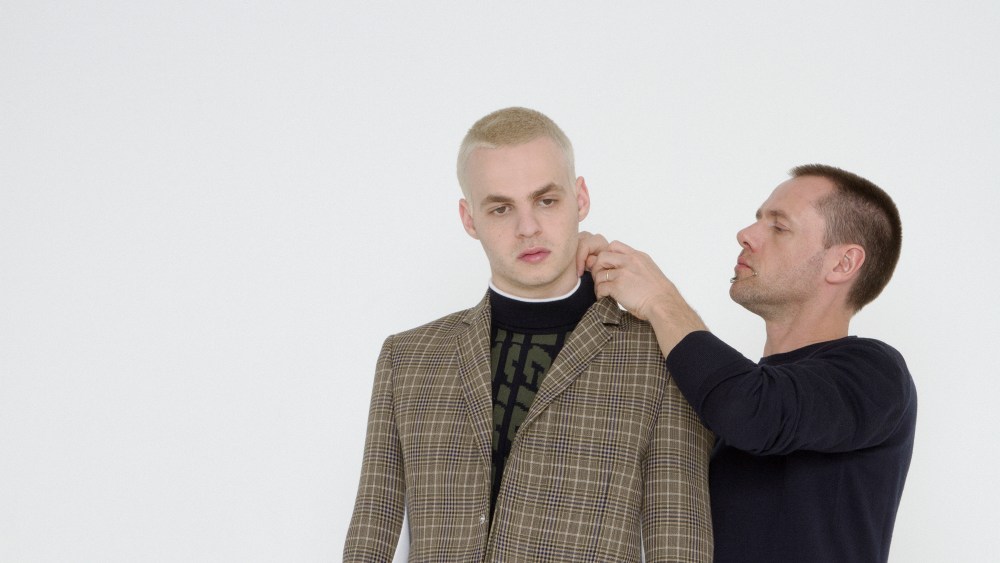 NEW YORK — To say that 2016 was a big year for Tim Coppens would be an understatement.

The Belgian-born designer was named creative director for Under Armour and created a well-received, edgy, athletic-inspired contemporary sportswear collection for the sporting goods giant. He also collaborated with NBA star Russell Westbrook as well as German eyewear brand Mykita on capsules, all as he continued to evolve and expand his own collection.

The hard work apparently paid off, since Pitti Uomo chose him as men’s wear guest designer for its fall edition, which opens in Florence today.

“It was like a reset of the brand in 2016,” Coppens said in an interview at his TriBeCa studio. “Since I moved here [to the U.S.] 10 years ago, I’ve believed in slow growth, where everything aligns and comes together.”

Coppens, an avid snowboarder and cyclist, was at the forefront of the ath-leisure movement when he created his brand in 2012. A veteran of Adidas and Ralph Lauren’s RLX brands, Coppens offered a mix of streetwear and athleticism with his expertise of tailoring luxury fabrics blended with technologically advanced materials.

“Everybody caught up so we’re bringing more romance to our collection,” he said. “We’ve done a lot but we’ve never felt pushed or contrived. But we also thought it was important to create an extra layer this time outside the four walls of this studio. So showing at Pitti now is perfect — 2016 is when all things came together and Pitti is the cherry on top and the opportunity to showcase what the brand stands for.”

Although he was born and raised in Belgium, this is the first time Coppens is showing his collection in Europe, which makes it even more important to him.

“It’s a huge honor to be at Pitti and to show our collection to people who don’t know the brand,” he said.

But being showcased at the prestigious show also raises the bar. Not only did Coppens work harder than ever on the fall collection, he also took special care to find the appropriate location and even created a book to accompany the show.

Coppens approached the 180-page tome as “a sketchbook — it has very personal touches.” The book is a collection of old photos, sketches, passport pictures and inspirational images. It tells the story of the brand, the collection that will be presented at Pitti and the process by which the designer creates his lines.

“It’s a very in-depth look,” he said. “I’ve never done anything like this before but I thought it was a cool opportunity and shows how my brain works.”

For Pitti, the collection centers around the adventures of two characters: Max and Tequila, a man and woman living in apocalyptic times. The theme blends elements of Mad Max with a dose of dirt bikes and horses.

To showcase the line, Coppens selected a former hippodrome that he said is both utilitarian and “very classical Florentine.” The show will be live-streamed on Instagram and will be filmed with four cameras that will be perched around the venue. Eighty screens that were formerly used to show horse races will also be employed during the event.

Although the technology sounds elaborate, Coppens said the aesthetic will be “very bare bones — not too polished.”

Following the official show, guests will move upstairs where the book will then take center stage at a post-party. Techno-electric music will serve as a backdrop and the book will be displayed on custom-made marble stands within the room.

As part of the book launch, Coppens is creating a capsule of a few items — a limited-edition hoodie, T-shirt, a denim shirt-jacket — that will feature images from the book. That capsule will be released at an event during New York Fashion Week: Men’s at the end of the month and the merchandise will be available for purchase immediately.

“We don’t want to do another show in New York,” Coppens said. “So we thought we’d make it an event.”

For the Pitti show, Coppens said 60 percent of the collection will be men’s with the remainder women’s. It will be heavy on outerwear but will cover a full lifestyle range, including an expanded knitwear selection.

Top pieces include a tailored jacket in a Prince of Wales pattern with stretch panels on the elbows; a classic wool shirt in a mini buffalo check with nylon insets; a leather bomber jacket with the word ‘tequila’ printed on the back; a lightweight coaches’ jacket with padded details, and a cotton/nylon windbreaker in a custom blue tone. There’s a motorcycle-inspired wool cardigan coat, jogger pants and an ivory shearling coat with moto accents that is “super simple,” but ultraluxurious.

“We’re hoping to show that Tim Coppens makes more than just a nice jacket,” he said. “For me, classic tailoring is as important as a track pant. We will keep blending the two worlds using luxe and tech fabrics.”

Although he was a pioneer in this field, Coppens is not concerned that other brands have copied his creations. “Things evolve,” he said. “We see athletic brands being put in everybody’s wardrobes today. But my collection still has elements of luxe.”

He’s also begun to add a “C” to some of the pieces as a way to brand his collection. “We’re using it in a lot of combinations,” he said.

It also helps to identify his line as his visibility continues to rise.

“When you’re on a wave, you have to ride it and not fall off,” he said with a laugh.