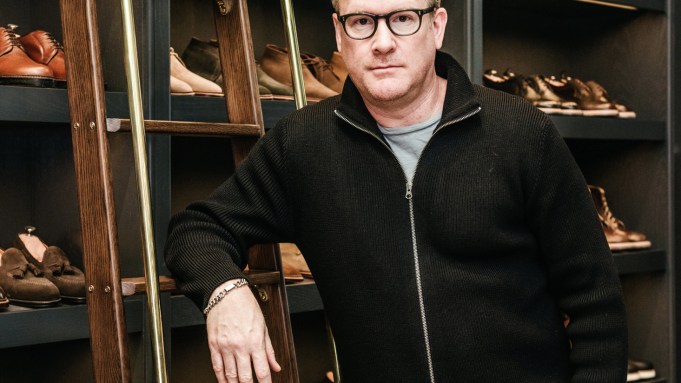 Todd Snyder is putting a stake in the ground in New York.

The men’s wear designer today will open the doors to his first American flagship, a 4,500-square-foot store at 25 Madison Square North at 26th Street. The shop, right off Madison Avenue, will offer a curated assortment of Snyder’s tailored clothing and sportswear and will include pieces from his myriad collaborations with brands as varied as Champion and Globe Trotter. It will also offer a coffee shop/bar, a barbershop and an optical boutique.

“I didn’t want to open just another retail store,” Snyder said during an exclusive walk-through on Monday. “This store is all about interacting with the customer and providing a unique experience.”

He said most men remain “intimidated by shopping,” so the store is designed to “tear down the barriers” and make them comfortable.

“It’s not just a clothing store,” Snyder stressed. “It’s a great place to come for a seasonal wardrobe upgrade with a personal stylist, to get fitted for your next suit while enjoying an espresso or a beer, or to hang out with friends while getting a haircut and a shave.” The store was designed by Snyder in collaboration with James Mills.

Chad Kessler, global brand president for American Eagle Outfitters, which bought the Todd Snyder brand in November 2015, said the location “gives us the opportunity to tell the whole Todd Snyder story. Part of Todd’s genius is his ability to tell a full lifestyle story.”

He said the store showcases the “cool way men are living and dressing today and by looking at a smaller store, it didn’t allow for a full expression of the brand.”

Kessler said Snyder was given free rein to create the concept for the store and worked with his new parent to “bring it to life.”

If the store is successful, Kessler said, there may be “some takeaways for American Eagle about bringing experiences and collaborations into a store. This is very much Todd Snyder’s universe,” but it can also be used as a model for other stores within the company’s portfolio. “Todd and I have had a lot of conversations about how shopping habits are changing and customers are looking for different experiences.” He said the idea is to “get the sense of ‘wow’ when you’re there,” Kessler said.

“The store represents everything that inspires me,” Snyder said, “from art to books, photographs, music, food. It houses that perfect edit of what a guy needs.”

The windows and the storefront feature custom artwork from Luke Edward Hall, a London-born illustrator and designer that Snyder commissioned for the project. Hall also inked the handwritten name on the exterior of the shop, and limited-edition prints of his work are being sold within the store.

“It’s meant to look like an old boutique from the Thirties,” Snyder said. “It was inspired by shops in London and has a very Old School feel. I wanted to have a little of that in New York.”

Upon entering, there is a separate entrance on the left into the cafe/bar that is being operated by restaurateur Nick Morgenstern of El Rey Coffee Bar & Luncheonette. The restaurant will open earlier and close later than the store, Snyder said, so a separate entrance was necessary. “It’ll be its own destination with its own clientele that will build crossover traffic,” he said.

On the right-hand side of the store is what Snyder is calling the British Invasion room. Here, a shop showcases the designer’s collaborations with Private White, Macintosh, Globe Trotter, Drake’s ties and others. He said this area is “meant to be a showcase and will change every season.”

Next up is the collection shop, where the designer’s runway offering is showcased. That’s followed by the City Gym boutique, where the longstanding collaboration with Champion is housed. That collection is mixed with other sportswear pieces as well as Snyder’s collaboration with New Balance. “We wanted the store to represent my collection and a curated assortment of other brands,” he said.

That’s followed by a suit shop that features both the Todd Snyder White Label, which retails for $598, as well as the Black Label, which can sell for up to $1,200.

Right behind the suit department is the Moscot eyewear shop and across the way is a shoe shop that offers all of Snyder’s favorite brands including Alden, Redwing, Tricker’s and others. More than 100 casual and dress styles are offered. There’s also a sneaker shoeshine bar. “People are spending $500 on sneakers these days,” he said, so why not make sure they look good.

Snyder has also licensed the names of some local bars, including Fedora and Old Town, and emblazoned their names on T-shirts for a new Speakeasy by Todd Snyder collection. There’s also a Hodinkee watch kiosk where vintage Rolexes and Hamiltons will share space with Timex, and an Aesop grooming area in front of the barbershop that is being operated by Persons of Interest.

There are a couple of firsts within the store as well. Last month, Snyder launched a private client service where stylists will work with guys to help them choose their wardrobe and make it easy for them to shop.

A VIP shop in the rear of the store can be used for this purpose, and Snyder is also working with Uber to provide customers with car rides back and forth to the shop. There is also an on-site tailor with more than 35 years of experience who will work with customers.

The shop also marks the introduction of the Todd Snyder denim collection that is being sold exclusively here.

In terms of decor, the designer has partnered with 1st Dibs, an online antiques marketplace, to offer an assortment of gifts, art and furniture that will be offered for purchase on a rotating basis. “Everything in the store is for sale,” Snyder said.

Kessler said there are no immediate plans to open other stores under the Todd Snyder name. Instead, the focus is on “getting the brand firmly established and growing it in the New York region.” But if successful, “we may try it in other cities as well.”

He said the news last week that Snyder’s four Japanese stores will close early next year is not related to this store opening. “We’re very happy with how Todd’s business is performing, and the growth in direct-to-consumer is exciting.”

Although his immediate focus is on brick and mortar, Snyder said the brand’s online business has been “incredible” for the past three or four months. And he views the new store as another tool to grow e-commerce.

“We really want to own New York,” he said. “I’m based here; my studio is a couple of blocks away. We think this store will bring us up to the next level.”