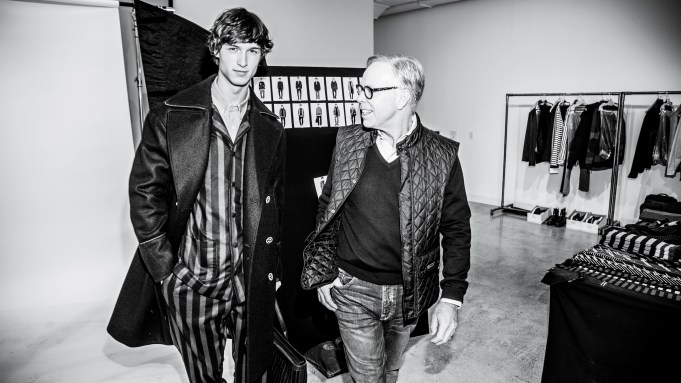 New York is home,” Tommy Hilfiger said as he prepared the fall collection he will show during New York Fashion Week: Men’s today. “If people are coming here to look at men’s, then we want to be present.”

The designer was explaining why he’s officially unveiling his fall men’s collection in Manhattan this season rather than in London, where he has shown for the past several years. While Hilfiger hosted one-on-one appointments with editors in London last month as well as a party, New York marks the true effort.

“Men’s wear is a very important part of our business — and it’s where we started,” he said of his brand, which in 2014 had global retail sales of $6.7 billion. “But we always do something in London. Last season in New York we had a showing, but this time, we’re doing a different type of show. I think it’s important to be present here. But we’re a global business, so we feel the need to do both.”

The collection will be shown in a presentation format rather than as a runway show, but that’s intentional, given the nature of the men’s business.

“We haven’t done runway for men for a while,” he said. “And the last time we did it was in New York. Men’s editors like to touch and feel the merchandise, so we’re setting it up so they can touch and feel it.”

Hilfiger has been a proponent of NYFW: Men’s since it was launched by the Council of Fashion Designers of America in July. And he believes that it has the wherewithal to one day challenge the big European cities of Milan and Paris as well as the upstart, London.

“We never thought women’s fashion week could rival those cities, but New York has one of the best weeks in the world right now,” he said. “More editors from all over the world are coming to New York and people from Europe and Asia love coming here. We tend to get jaded, but it’s exciting for them.”

As a result, he believes men’s may eventually have the same cachet.

“For 30 years, they showed men’s wear in New York, but then it went on hiatus,” he said. “Women’s became so strong that it overshadowed men’s and they felt left out. But now, here we are.”

Hilfiger’s fall collection is called “Hilfiger Edition.” The designer described it as a “collection of American style essentials curated from our world.”

“We’ll be celebrating heritage pieces and style staples,” he said, “updated for a modern age. Those are the building blocks for a modern world.”

Over the past three decades, he said he has been “reinventing” the core of his business, which centers around a preppy, red-white-and-blue sensibility. “But this is much more than modern preppy,” he said. “These pieces are time-honored favorites.”

Yes, there will be Hilfiger signatures like chinos, rugby shirts, dress shirts, Chelsea boots, tote bags, ties and scarves, “but with a sophisticated edge,” he said. “They’ll be more luxurious, the top of the pyramid.”

While the world of fashion shifts and changes, “preppy always was and always will be,” he said. “But normal preppy is boring. I like to make it cool, unique and relevant for today. So there are the same signature details, but with a fresh take.”

Hilfiger said that when looking at the collection, it won’t immediately scream preppy, “but polished classics.”

It’s the designer’s ability to stay consistent to his vision but transform it forward that has led to his longevity. “When you’ve been in this business as long as I have, staying true to yourself is the key to success,” he said.

That’s a lesson that younger designers need to learn. “Those that stray usually don’t last,” he said. “If you have a niche and a position in life, be true to it.

“That doesn’t mean you have to keep doing the same thing over and over,” he added, “but there are new ways to do chinos and peacoats and oxford shirts. Reinvent the classics — that was the idea from the very beginning. I wanted the line to be wearable, affordable and accessible, yet aspirational. And that has never changed.”

It’s this unwavering vision that has also allowed the company to gain a foothold overseas. “As we expanded globally, we continue to grow as a result of this philosophy,” Hilfiger said.

The idea of affordable luxury has been particularly successful in Europe and China, the designer said, “and we’ve never strayed from that. It’s what people wear.”

In the most recent annual report from Hilfiger’s parent company, PVH Corp., which acquired the business in 2010, North America represents 46 percent of sales while international, including Europe, the Middle East, Africa, Asia-Pacific and Latin America, makes up the remaining 54 percent. Macy’s is the exclusive department-store retailer for the company’s men’s and women’s sportswear in the United States. The higher-priced line, which is what will be shown at NYFW: Men’s, is sold overseas as well as in the company’s own stores.

While Hilfiger’s business under PVH is solid and growing, the same cannot be said of many other designer brands in the market.
“There are a lot of cool ideas out there,” he said, “but if it’s too edgy or there’s too narrow an audience, it won’t survive.”

Hilfiger pointed to Thom Browne as the designer he believes to be “the most talented” of the new crop. “He’s a real genius and does an outstanding job. He’s undoubtedly number one. He reinvented the tailored clothing market and he came into the marketplace with very special classics.”

With the success that Hilfiger has had over three-plus decades in the fashion industry, is he ever tempted to step back and let the Thom Brownes of the world take his spot? Not a chance.

“I really love it,” he said of why he continues to be so active. “It’s fun and exciting and it’s different every day. One day you can be working on a handbag line, the next, you’re opening a store in Berlin or Brazil. Now I’m doing a men’s show and then 10 days later, a big women’s show. There’s always something new and different happening with the business.”

He also embraces social media and everything that mode of communication brings with it. For his women’s show on Feb. 15, Hilfiger will create the InstaPit, a dedicated media pit for Instagram photographers to capture images of the collection. In 2014, the designer hosted 20 Instagrammers on site on show day — InstaMeet — to capture the environment in their unique way. In October, he introduced a virtual reality shopping experience at several stores where customers could experience his runway show firsthand.

“We’re taking advantage of all the ways to connect to our customer,” he said.

That includes associating with musicians, celebrities and sports stars. Last fall, he revealed tennis star Rafael Nadal as a global ambassador for his underwear collection, an association that resulted in more than 500 million impressions and more than 11 million views.

“Social media connects everyone in the world and has become the voice of the public,” he said. Within the next 18 months or so, he’ll connect with the public in a totally different way when the redesign of The Raleigh Hotel in South Beach, Miami, is completed. Hilfiger bought the historic property in 2014 and is turning it into a five-star hotel and dining experience. The venture is a personal one, separate from his activities with PVH. “I always wanted to be in the hotel business,” he said. “My idea is that I could truly create a lifestyle. And this is the epitome of that idea.”

The designer is intimately involved in everything from decorating the rooms and common areas to overseeing the spa, restaurants and nightclubs.

But don’t expect The Raleigh to be the all-American aesthetic of the designer’s fashions. “It won’t be a Tommy Hilfiger hotel. We’re keeping it The Raleigh, but we’re bringing it back to its original 1930s Art Deco glamour,” he said. “It won’t be a red-white-and-blue, preppy nautical hotel.”