For the latest iteration, the Italian house has partnered with United Standard’s designer Giorgio di Salvo on a capsule collection.

The greyhound is back on track, courtesy of United Standard’s Giorgio di Salvo.

For the third chapter of its new course, Trussardi, whose logo has long been a greyhound, has tapped the designer behind the Italian streetwear label to evolve its Archive + Now project.

The latest collaboration includes the brand’s first capsule collection, which will be unveiled with a presentation on June 15 inside a car park on Via Agnello 13 during Milan Fashion Week.

The chapter follows the first two iterations of the project spearheaded respectively by Giulia and Camilla Venturini, the designers behind the Medea handbag brand, and by Instagram account @Checking_Invoices.

Comprising a range of accessories and apparel pieces, the collection was designed as an homage to the label’s archives and to what the brand — founded in 1911 — stands for today.

“Delving deep into the archives and seeing the work that has been done so far was a magical experience. For any Italian person, especially someone who is Milanese, Trussardi is part of the history of costume,” Di Salvo said.

Old ad campaigns as well as accessories and leather garments triggered the designer’s imagination. Di Salvo also brought back to life the original 1973 Trussardi logo featuring a painted greyhound, reprising that version instead of the more modern stylized one.

“It was the first time that a label juxtaposed a pictogram to flank the name of the house. As something that was conceived back then, it was particularly impressive for me to see how it already reflected today’s codes of fashion,” Di Salvo noted. The logo appears on a range of basic items, such as T-shirts and sweaters, as well as fleece pants, as Di Salvo wanted for the greyhound to “speak for itself.”

The United Standard designer underscored how meeting with the company’s chairman Tomaso Trussardi helped him “understand what is perceived as being distinctively Trussardi today.” In a nod to a shared passion for the automotive world, Di Salvo employed throughout the capsule collection rainbow-colored hardware inspired by the hues of overheated mufflers.

A range of Nineties signature items, including the bum bag and vest, were reinterpreted by Di Salvo using leather, while United Standard’s distinctive accessories such as the neck keychain were given a sleeker look in the capsule. 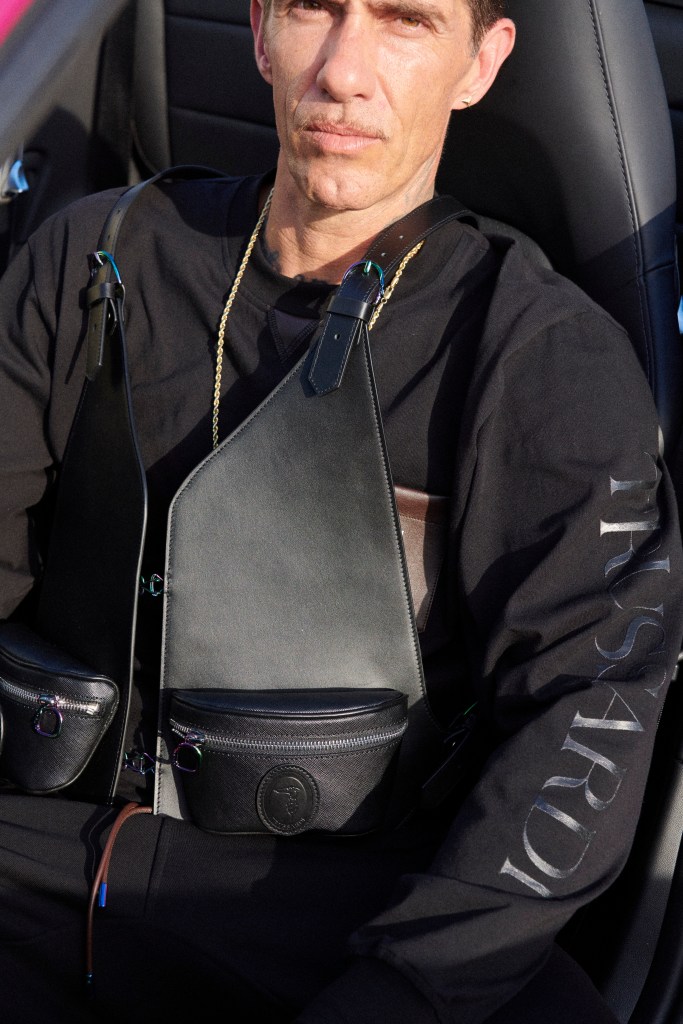 “Instead of brown, which is traditionally associated with Trussardi, I used black, which is more in line with my aesthetics, sometimes matching it to brown,” Di Salvo explained of the dark color palette. A dark leather trenchcoat with the logo embossed on the back speaks equally to Trussardi’s polished aesthetics and to Di Salvo’s underground codes.

The communication-savvy Di Salvo — whose brand is under the umbrella of Italy’s New Guards Group — was adamant that the project “required a media output, which is as important as the collection itself, and I tried to figure out the best way to show the project without directly involving myself.”

American multihyphenate artist Cali Thornhill DeWitt fronts the images and a video for the campaign of the Archive + Now°3 project. Lensed by Italian photographer Francesco Nazardo, the images portray DeWitt against a urban landscape or in the driver’s seat of a touring car.

The Archive + Now project was introduced in February, in the wake of the acquisition of the Italian company by independent asset management firm QuattroR.