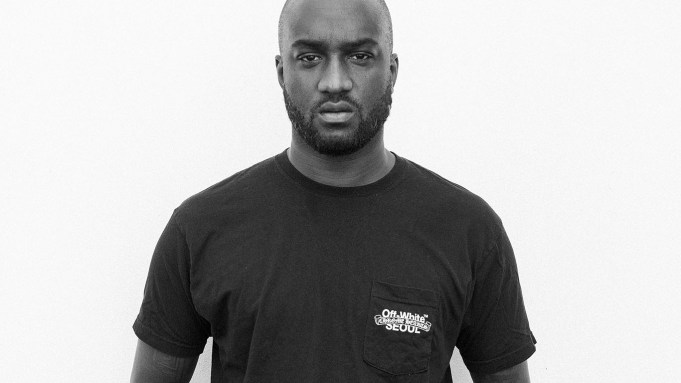 MILAN — “Imagination plus clothing to me equals art.”

That equation forms the basis of Off-White’s philosophy, according to Virgil Abloh, the brand’s founder and creative director.

And fashion and art are definitely instrumental to “open people’s minds, change the context,” as the eclectic artist and designer explained during an interview at the Cardi Black Box art gallery here, which had been transformed into the company’s temporary headquarters. Abloh and his team are currently working on the men’s runway show the brand will host in Florence on June 15, as a special guest of the 92nd edition of Pitti Uomo.

“I’m super inspired by being asked to show at Pitti because I feel like it’s a great institution within fashion to highlight designers that are doing relevant work,” said Abloh, who is taking part in the Florentine fashion calendar for the first time. “For Pitti, being asked is a sort of [acknowledgment] that a new style in fashion has arrived. And, to me, I’m thankful to be given that stage to do this concept.”

SEE ALSO: Ones to Watch: Some Brands to Check Out at Pitti Uomo >>

But the location and its tradition, while definitely pushing Abloh to develop a collection “showing the tension between sartorial and streetwear,” as he explained, weren’t the designer’s only sources of inspiration. Abloh highlighted “I’m there not to make clothes for making clothes — just for clothing’s sake,” and that he wanted his Pitti show to have more than just a stylistic impact.

“Along with the location where it is shown, it’s also highly influenced by the current time that we are in and I think there are relevant issues in terms of politics and the young generation versus its preceding generations…” the designer explained. “I’m using this collection to embody a call of a partner/collaborator by the name of Jenny Holzer [the neo-conceptional artist whose work centers on the delivery of ideas in public spaces]…I believe her voice is as strong as the precise time we are in. It’s a voice that needs to be heard especially by younger demographics, so I basically wanted to create a project that allows both to represent an idea.”

Describing it as “the most important collection that I’ve done,” Abloh said that he titled it “Temperature,” which is a word that Martin Margiela used to describe colors.

“It’s a metaphor within my vocabulary system to sort of describe a moment of something that’s already existing. Take the weather, for example — if it’s cold or hot outside, it changes your mood, it changes everything. Humans are responsive to temperature,” he said. “The collection is in my way describing temperature influencing people and climate and the globe, the ecosystem.”

Along with showing Abloh’s “response to a sort of observation of refugees, immigration and contemporary thought on those sort of issues,” the collection also gave the designer the ultimate playground to rethink traditional tailoring. “Pitti is going to be an exercise in showing the importance of tailoring and suiting. What I’m doing is dismantling it, exaggerating it, shrinking proportions to sort of find something which feels younger,” he said. “There is an artistic element in the gesture of the making of different proportions. “

This approach has resulted in clothes with unconventional silhouettes. Suits have been shrunk; the waists of pants have been cut higher and enhanced with extralong PVC belts with plastic buckles. Tops, including a cotton cable-knit tank top and a knitted polo with a wide collar, are fitted, while denim and leather jackets are cropped and voluminous.

The looks of Nineties subcultures definitely influenced the collection in terms of both silhouettes and colors, such as the iridescent and neon tones, as well as the accessories. They include oversized PVC tote bags, extralong keychains hooked to pants, and printed slides and work boots.

“I was born in 1980 and the Nineties are quintessentially my generation,” explained the designer. “I drew on those subcultures in which I was taking part, whether skateboarding or the clash between rock ‘n’ roll and hip-hop.”

Kurt Cobain, The Notorious B.I.G., N.W.A., the Wu-Tang Clan — but also Helmut Lang and Raf Simons, along with his background as a DJ, all played a key role in Abloh’s stylistic evolution.

“Everything happening in that era — the music, the fashion, the emotion — were a predecessor to what we have now,” he said.

In Florence, Abloh will also show some looks from Off-White women’s resort collection.

“They are both progressive, but they are two separate collections, they are not related,” emphasized the designer, explaining the mood of the women’s lineup. “I was sort of researching on this idea of wildness. Like the idea of an overgrown patch of land — nature just responding to the environment and sort of like growing at its own pace.”

Traditional floral patterns are reworked in the collection, which also includes a range of pieces featuring a raw, natural aspect.

After the runway show in Florence, Abloh’s men’s spring 2018 collection will be core of another project, called EM PTY Gallery.

A number of pieces — selected by a “ghost director,” Milan-based photographer Piotr Niepsuj — will be installed in the gallery, along with videos and pictures by a range of up-and-coming photographers and artists. The EM PTY Gallery will be open to the public June 22 to 25.

Among his other myriad ongoing projects, Abloh is also working with Ikea to redesign the Swedish furniture company’s signature blue plastic shopping bag.

“It’s cool, it’s conceptual. It’s about being able to bring a younger point of view and an artistic statement. I’m heavily influenced by Duchamp, not only by the cornerstones he is known for but by the full process. Equally, I’m inspired by Warhol and his ideas predicting the now in terms of art,” said Abloh. “I’ve always looked to collaborating with progressive thinking institutions, that are sort of cornerstones of an idea. Ikea is the best furniture services institution. It’s about completely modern, democratic design, which to me is essentially what I stand for.”

Mirror Image: Jonathan Anderson Looks to His Own Style for Spring