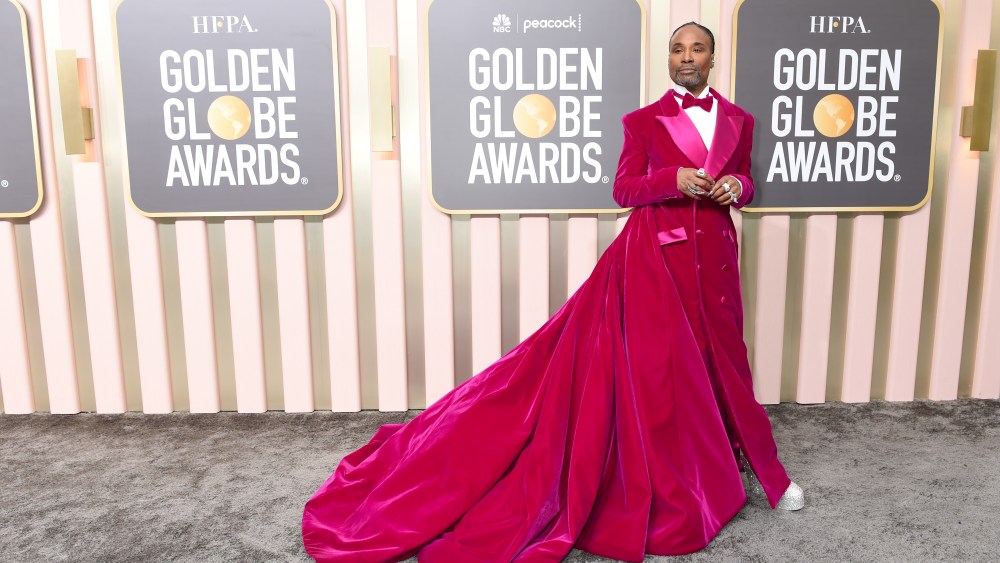 The Golden Globes returned in its full capacity on Tuesday night, bringing with it an array of standout red carpet looks, especially among the male celebrities.

Male celebrities like Austin Butler, Billy Porter, Andrew Garfield, Jeremy Pope and others brought their fashion A-games to the 2023 Golden Globes red carpet, with some going the classic men’s fashion route and others looking to bold, couture-like looks to make an impression on spectators.

Porter arguably had one of the most standout men’s fashion looks on the Golden Globes red carpet. The Emmy-winning actor attended the awards show wearing a bright pink velvet tuxedo dress custom made by Christian Siriano. The dress gave a nod to one of Porter’s most famous looks — the hybrid tuxedo ballgown also designed by Siriano that the actor wore to the 2019 Oscars.

As predicted by celebrity fashion stylists, many male celebrities went with a modernized, classic look for their Golden Globes red carpet outfits, with the stars incorporating modern design elements with their classic suits or tuxedos. This was seen on the likes of Eddie Redmayne, who wore a custom Valentino black suit jacket paired with an oversize floral pin; Pope, who wore a leather suit from Dolce & Gabbana, and Tyler James Williams, who wore a cropped, loose fitting suit from Amiri.

Many celebrities also didn’t shy away from color this year. Take Seth Rogen, who wore a peach-hued tuxedo from Dior; Barry Keoghan, who wore a powder blue double-breasted custom Louis Vuitton suit, and Garfield, who looked to a burnt orange, casual Zegna suit worn over a black shirt.

Despite more male celebrities leaning toward creative style options, some still stuck to their classic routes for the Golden Globes, such as Butler in a black Gucci tuxedo; Matt Bomer in a dark purple, velvet Ralph Lauren tuxedo, and Henry Golding in a black Giorgio Armani tuxedo.

With the breadth of men’s fashion looks seen at the Golden Globes, it’s likely spectators will continue to see a large range of standout fashion through the rest of the 2023 awards season.

Click through the above gallery to see more men’s fashion looks from the 2023 Golden Globes.