The former Club Monaco designer has updated and modernized the retailer's classic looks. 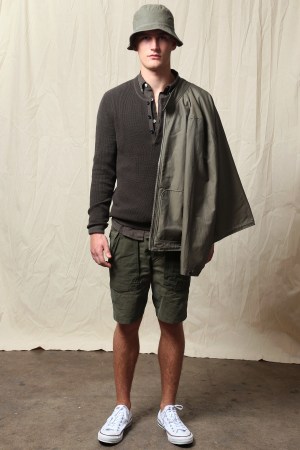 The Top Men’s Trends for Spring

That’s the way Aaron Levine described the sea change he is spearheading at Abercrombie & Fitch Co. since coming on board as head of men’s design around four months ago.

In June, Levine left his position as vice president of men’s design for Club Monaco to join the Columbus, Ohio-based teen retailer as part of its reinvention campaign. At Club Monaco, Levine was credited with offering up spot-on fashion, innovative collaborations and an elevated store experience.

The Columbus team is hoping he can work similar magic for Abercrombie as well. It could certainly use it.

Like its competitors in the teen space, A&F had been stumbling for the past few years, plagued by continual declines in same-store sales and a marked lack of interest among its core consumers. The retailer closed roughly 300 doors, formed wholesale arrangements, and overhauled its executive team in an attempt to restore the brand’s relevancy. It is also moving away from its trademark sexual imagery in its marketing and advertising.

Despite this backstory, Levine said he doesn’t feel any pressure. In fact, he was nearly giddy with glee as he raced around the sample room here the night before he was ready to show his inaugural collection to editors on Wednesday afternoon. “This is sick,” he said of the paratrooper pants and the garment-dyed linen shirts.

Stopping long enough to take a breath, Levine said working at A&F has “been so much fun. They’re really ready to evolve.”

Ironically, Levine said he managed an Abercrombie store in Richmond, Va., in 1999, “so it’s really personal for me to come back. It’s  a privilege for me to work with these guys and take the company to the next step.”

He said when he came on board, he spent his first few weeks looking at color, print and patterns and starting to put some looks together. “People responded and we were off to the races,” he said. “It just felt organic, natural and positive.”

Levine said he was given a clean slate to do whatever he wanted with the design. He went back into the brand’s archives and moved to modernize many of the pieces for today’s customer.

“We’re dipping our toe into the heritage, but they’re not reproductions,” he said. “We used them for inspiration and to push the brand forward.”

His first collection has traces of Visvim and RRL and offers up some new and updated fabrics and silhouettes, including linen. “We had never done linen as a company,” he said, shaking his head and pointing to the linen bombers and shirts.

Garment-dyed and garment-washed fabrics are also key to the line. “We always did them, but we’ve pushed them in a more sophisticated direction,” he said.

A&F’s signature “old-school, travel and camp” T-shirts have been updated with distressed finishes and vintage patterns. “We dipped into the old catalogues for inspiration,” he said.

He’s also reintroducing the brand’s logo, which was famously downplayed by the company last year. But it’s less about the moose and more about the brand name that Levine is using as a nod to the firm’s heyday in the Nineties.

Levine also looked to Peter Beard as well as some old Esquire magazines when putting the line together. “Nick Sullivan [fashion director of Esquire] let me into the archive room and I was looking at issue one when Ernest Hemingway was a contributor. He was a big supporter of Abercrombie so we took some liberties with that.”

Denim, long a hallmark of the brand, has also been updated. “We do killer denim, the quality is great and the prices are amazing,” he said, noting that his tweaks included taking the branding off the pocket and offering some new finishes.

“We keep on focusing on fabric, fit and finish,” Levine said. “We’re pushing the envelope on how far we can take this thing. It’s been so similar for so long so it’s refreshing to move forward but still be Abercrombie & Fitch.”

The retailer has to improve both men’s and women’s wear, however, and Levine said he’s working closely with Kristina Szasz, formerly of Tommy Hilfiger and Karl Lagerfeld, who came on board a few weeks ago as head women’s designer. “We’re very open and transparent with our ideas, color palette, everything. We’re team players,” he said.

For the time being, Levine said he’s concentrating on the collection only and is not working on the stores themselves. “We’re going to focus on product, keep our heads down and get it right,” he said.

But the retailer’s marketing team is ready to take the next step. It recently completed shooting the spring ad campaign with photographer Bruno Staub. The initiative will be unveiled in December but was being teased at Wednesday’s preview. The images were clean and classic without being overtly sexual, and clearly represent the new company’s new direction.