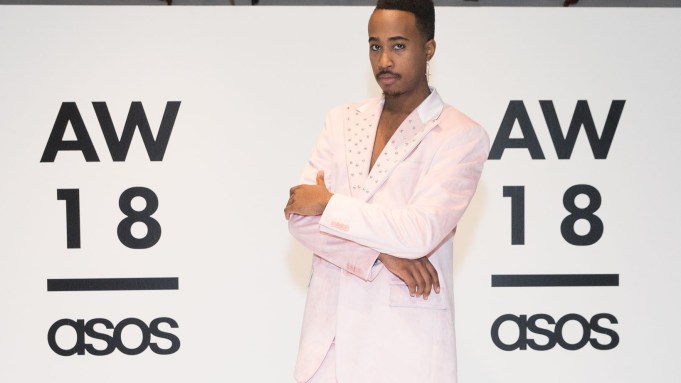 British online retailer Asos on Monday held its inaugural New York presentation for the brand’s fall 2018 men’s wear collection with an eye toward growing its U.S. business, which head of men’s Nick Eley said is in second place, behind the U.K.

The e-tailer has ratcheted up its presence during New York Fashion Week: Men’s since July, when it held a party.

Primarily aimed at young adults — Eley said the average age is 20 — Asos sells more than 850 brands and its own range of clothing and accessories. The brand is making a push, offering plus sizes for men, which Eley called a “huge opportunity.”

In addition, Eley said the men’s and women’s sides of the business have started collaborating for the first time on trends, fabrics and more, the results of which will be fully realized with the spring 2019 collection.

The brand features an abundance of over-the-top fashion and glam items. After all, Asos was originally called As Seen on Screen when it launched in 1999, before its name was shortened to an acronym. “The Asos guy is going out more and is more confident with what he’s wearing,” said Eley.

The presentation was held at 393 NYC, a long, narrow gallerylike space on Broadway that had all the accoutrements of an art opening for a rising young artist, including a DJ and bar. That the mass of people had a variety of personal styles, everything from a dandified dude wearing pinstripes to a monochromatic man dressed head-to-toe in red, including a Guardian Angels-style beret, pleased Eley, who said Asos’ fall collection has a Western-inspired theme.

The designs ranged from subtle to full-on Western, with a cream-colored sweater with the word “Rodeo” written in yarn across the front to a pink suit with a Western motif on the back of the jacket and silver star-shaped studs running down the pant legs.

Asos mostly eschewed traditional models, opting for a real people with a range of backgrounds, including fashion, food, music and social activism.

Adam Eli, an activist, writer and founder of Voices4, a group committed to advancing the rights of the LGBTQ community, at the event wore a satiny black shirt unbuttoned low with a large gold Star of David and white pants, while Drake Jazz Brown was wearing a striped shirt, black pants with metallic blue designs, and a long brown, white and green boa.

Besides the theme of individuality and personal style, Eley stressed inclusion in terms of body shape and size and gender fluidity. He said Asos’ foray into plus sizes will give customers access to its total fashion range, as opposed to creating items only made for them. Eley further said the demarcation line between men’s wear and women’s wear is fluid, with men buying women’s styles and vice versa. The fact that Asos sells only online may make it easier for people to cross-shop genders, he added.