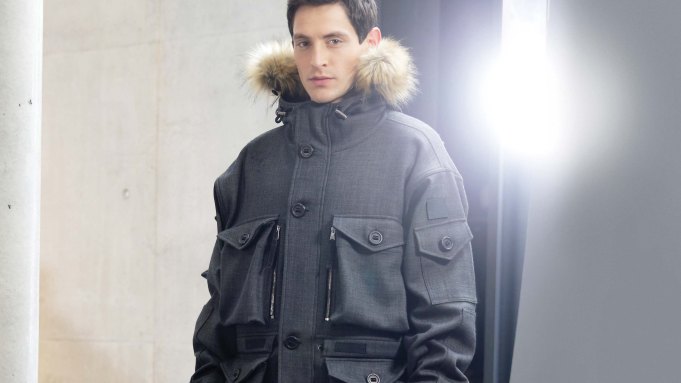 As part of a strategic refocus, Hugo Boss is staging a men’s only, Boss brand fashion show during New York Fashion Week: Men’s on Jan. 31.

After spotlighting the Hugo Boss women’s wear collection on the New York runway for the last few seasons and presenting mixed men’s and women’s shows in China, the Metzingen-based giant has decided to more clearly center its attention on the company’s core business: men’s wear under the Boss brand.

“We have to give the brand a wake-up call,” acknowledged Ingo Wilts, the recently returned Boss men’s wear veteran who has joined the board as chief brand officer responsible for brand and creative management. “As a company, we have to change the perception of Boss as more modern, more young,” he said.

It’s not often that a fashion show venue is a key factor in an investor’s day presentation, but last November when Hugo Boss executives revealed the company’s strategic development plan. As reported, Hugo Boss announced the portfolio would henceforth be focused on two brands only — Boss, the upper-premium collection, and Hugo, its more progressive offering — with men’s wear now the primary focal point. Thus, the group said, the Boss men’s wear collection rather than Boss women’s wear would be presented during New York Fashion Week in 2017.

While executives emphasized Hugo Boss is not drawing back from growing Boss women’s business under artistic director Jason Wu, (women’s generated 11 percent of group sales in 2015), steps are now being taken to redirect buzz towards the group’s somewhat neglected heart and soul.

WWD caught up with Wilts between flights, fittings and board meetings to find out what’s stylistically and strategically on the brand’s New York agenda. “New York is a strong, modern, dynamic city — all values which stand for Boss. And it’s where we feel at home,” he said. “The U.S. market is super important for us, and to push this market, it felt good to get the show to New York,” he added.

New on the runway? “In the past, we featured types of editorial pieces to gain fashion credibility, but now, we’re really showing the new parts of the Boss world,” he said. That is, fashion-driven pieces that are in the collection and will be featured in Boss’ own stores but also with retail partners to provide a variety of items [at point of sale]. It could be a coat, a sweater, a silhouette,” he said.

In what will be a “small and exclusive” show with a concise lineup, expect tailoring to star for next fall, but combined with sportswear, and rich in contrasts of volumes and lengths. “If people think Boss is about a suit and a tie, we want to give them a new idea of Boss: a bit more modern, younger and sophisticated,” he said. The main story and inspiration is the global traveler, a young, sophisticated guy who lives in a big city somewhere around the world. “The idea is to make clothes as functional as possible, so he can feel comfortable wherever he ends up.”

To that end, details that you would find in the lining of a sportive, outerwear jacket, for example, are now built into city-bound tailored jackets. He added the tailoring is more relaxed on the whole — “very soft and [deconstructed]” — though using more “substantial” and sometimes heavier fabrics. Boiled wool, for example, or stiffer cloths one would find in an old peacoat are making their way into tailored styles.

Outerwear shapes are very short or very long, pants very wide or notably slim, blazers treading the middle line but shown over untraditional shirts and tops, the big zipper a favorite accent on fall shirts and sweaters. The team also delved into the archives, redesigning oversized pieces from the Eighties and Nineties. Thus a big utility parka with extralarge pockets was given a softer construction, and keeping to the large-versus-small equation, oversize pieces on top are generally paired with tighter shapes on the bottom. Footwear, too, is going the heavier route.

“We are entering a new era and we have to show these kinds of pieces. And show them to the people, via social media and our own stores — which are our business cards. We need to make people aware of what Boss could be,” Wilts remarked.

Also on the agenda: what Wilts terms “injections” to refresh the brand. These are small capsules with heightened fashion content. He noted the runway presentation would be a full 360-degree proposition, involving social media and also featuring a film, shot prior to the show.

Contributing 19 percent of group sales in 2015, the American market is a key revenue generator for Hugo Boss, but one under pressure. In the first nine months of 2016, sales in the U.S. declined 17 percent to 317 million euros, or $353.8 million. U.S. sales for the full year will be released on March 9.

Dollar figures are converted at an average exchange for the period to which they refer.

As reported, heavy discounting activity has lead the company to intentionally limit wholesale distribution in the U.S., which not only pressured regional sales, but had a “material impact on 2016 performance” the group said. Preliminary results for the fourth quarter saw the group’s global wholesale business fall 13 percent in local currencies, negatively impacted by “continued efforts to clean up distribution in the U.S.”

The wholesale problem isn’t going away anytime soon, especially in light of planned, wide scale department store closures in the year to come.

Last November, Hugo Boss outlined the expected restructuring of the U.S. wholesale distribution channel to analysts. Off-price, they were told, would move from 22 percent in 2015 to single-digit in 2017, with a stronger focus on full-price retailers and an expansion and upgrade brand presence in relevant online channels. The American wholesale business was thus expected to decline by a low double-digit rate in 2017.

To better control its fate, the overall U.S. growth strategy will focus on directly operated stores, where the assortments are to be rebalanced, as well as its own e-commerce site and the expansion of its omnichannel services, the company said. At the end of 2016, Boss said it had 63 stores and 35 shops-in-shops in the U.S. The plan calls for closing five stores in the American market this year.

Wilts said: “2017 is currently expected to be a year of stabilization during which the group will continue to further consolidate the wholesale distribution in the U.S. market in particular. On the other hand,” he added, “we already see positive signals from our own retail business.”