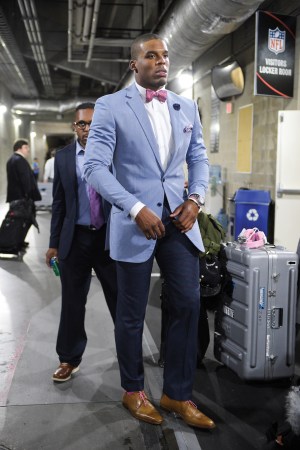 Cam Newton’s almost-perfect season matches his almost-perfect sartorial style. The 6-foot, 5-inch Carolina Panthers quarterback has a penchant for smoking slippers, bold blazers and furry foxtail key chains. But things weren’t always this way. “I have a range of styles, but nothing flamboyant,” Newton told WWD in 2012, his second season in the NFL and ahead of launching his Made Cam Newton men’s wear line with Belk. That was then, and this is now: As he’s settled into his game, Newton’s style has become more flamboyant both on and off the field. Given the Panthers’ 15-1 season, maybe we’ll soon see other players sporting lucky foxtails