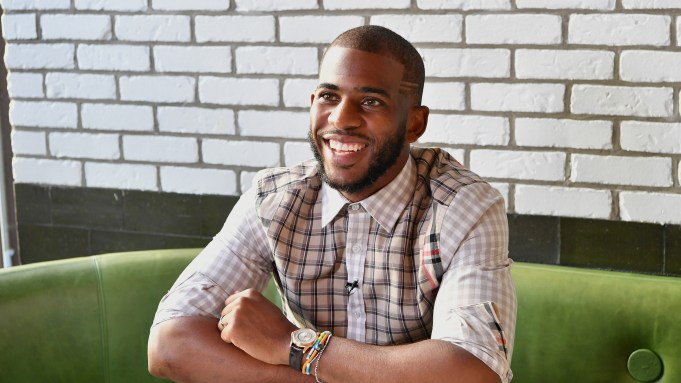 The NBA player, who is currently between teams, was in good spirits on Tuesday night while celebrating the launch of his capsule collection with Five Four, a men’s wear subscription service, at Catch in the Meatpacking District.

“This is sort of my first time being a free agent, and I can see how it can become stressful and taxing and you feel like the weight of the world is on your shoulders. But I’m so fortunate to have the family and support system that I have,” said Paul.

Although Paul has worked with the Jordan brand for the past 10 years, this is the first time he’s partnered with a fashion company. According to Paul, some of that had to do with his contract with the Nike-owned company, but a lot of it had to do with the relationships he built with Andres Izquieta and Dee Murthy, Five Four’s cofounders. Paul first met Izquieta and Murthy when he was traded to the Los Angeles Clippers and was intrigued by the Lob City sweatshirts that fans were wearing in the stands, which Five Four used to make.

“It’s been amazing to watch their growth since then and I think I’ve had an opportunity to grow during the same time and that’s why I felt this partnership was fitting,” said Paul. “Whenever you are doing business, whatever it may be, you don’t want to just work with the brand. It’s also the people that make the brand what it is, and anyone that works with Five Four will tell you how much they enjoy working there because of Andres and Dee and who they are.”

Paul worked with his stylist Courtney Mays to design the collection, which is available now on Five Four’s e-commerce site. The capsule, which ranges from $20 to $59, features on-trend staples such as knit shirts, tapered joggers, mixed-media shirts and other layering pieces.

Earlier this year Paul starred in a Five Four TV campaign, which aired on networks including Spike TV, ESPN, Vice and Bloomberg. Five Four is known for producing capsule collections with fashion industry veterans including Robert Geller, Mark McNairy and Motofumi “Poggy” Kogi, but Paul is the first athlete they’ve collaborated with.

The company continues to grow its concept — Five Four Club members pay $60 a month to receive a curated box of two or three items, but pieces can also be purchased à la carte. Last July it launched a stand-alone footwear brand with Mark McNairy and introduced a streetwear-inspired activewear brand Grand Athletic Club late last year. It will offer grooming products under Mercer and Clay later on this year.