C.P. Company Goes Back to the Future

The Italian sportswear brand has unveiled a flagship in Milan as part of its retail expansion plan.

C.P. Company is looking back — at its heritage and product know-how — to move forward.

The Italian sportswear company, which pioneered the garment-dyeing technique in the Seventies, is entering the next phase of its development strategy under the lead of Lorenzo Osti, the son of the brand’s founder Massimo, who was appointed to the president role last March, after four years serving as its marketing director.

Chinese Tristate Holdings Ltd. acquired the company in 2015 from former owner FGF Industry SpA for an undisclosed sum. As part of the deal, Osti retains a minority interest.

Signaling the evolution of the brand under his lead, C.P. Company unveiled last month a retail unit in Milan located in the arty Brera District. “It’s a marketing necessity as the brand has strong assets to leverage, for its heritage and cultural relevance for certain communities. We’re lucky to have a loyal customer base but lacking a retail network has prevented us from expanding to a new audience. The retail network will allow us to illustrate what the brand stands for,” Osti told WWD.

Covering 1,830 square feet, the two-story location was conceived as “a stage allowing the products to stand out. We wanted a neutral environment with some key elements concretely or metaphorically highlighting central aspects of the brand,” he said. 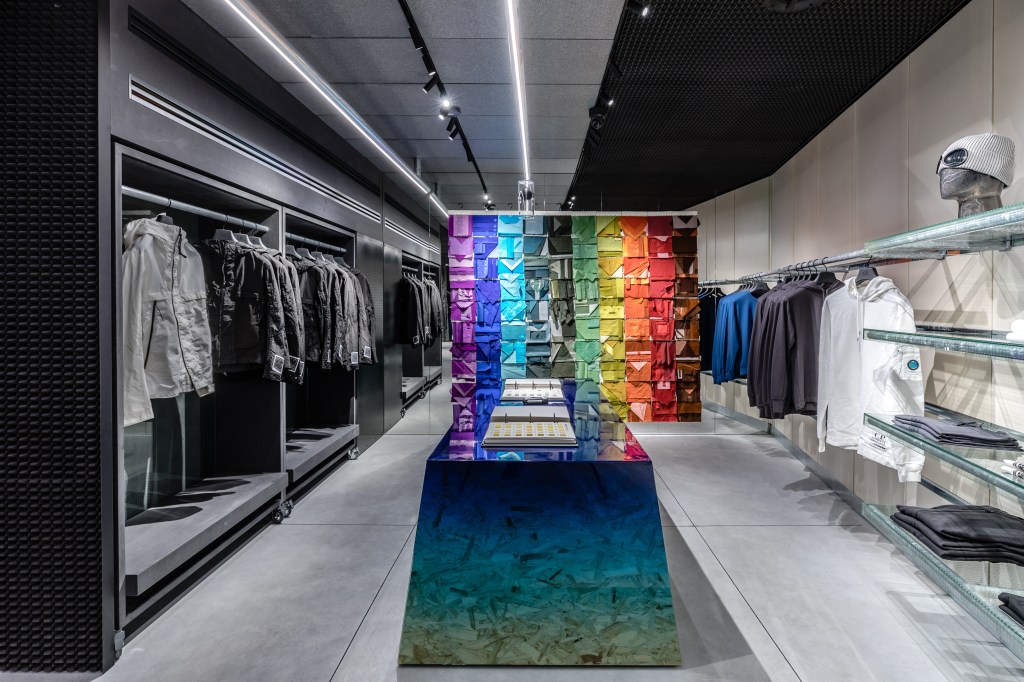 Developed in partnership with Italian architect Andrea Caputo, the flagship houses modular set ups, soundproof walls and is dominated by an impressive light box which lights up with different hues throughout the day. In a nod to the brand’s signature garment dyeing technique, counters are immersed in highly saturated blue pigments, standing out against the minimal design of the space.

As part of its retail expansion, C.P. Company will also open its first outpost in Beijing at the China World Mall on June 20 and it is also seeking fitting locations in Paris and Amsterdam, as well as a new unit in London, where it already operates a retail space with a local partner.

Although prudent, Osti said he plans to reach nine doors globally in the next three years. “We started our retail expansion just now and we know it’s not an easy task…but we as a company have a research and development, trial and error approach, always getting our hands dirty, trying and adjusting. It’s a mindset we got from product development,” Osti explained.

Expanding its retail business also means restructuring the brand’s online shop, which generates only 6 percent of the company’s turnover. The latter is highly and historically dependent on wholesale with around 900 retailers globally.

Among the first adjustments to its online shop, C.P. Company has implemented a CRM-centric system involving all the sales touchpoints and enhanced its clients’ outlining strategy. Osti also plans to bring logistics in-house by the end of 2020 with the aim to boost the brand’s omnichannel experience. At the same time, to keep growing its wholesale channel, in 2019 the company relocated its Milan showroom to a wider, 7,534 square-foot location on Milan’s Via Tortona.

The showroom also hosts the presentation of the spring 2020 collection today during Milan Fashion Week.

Product-wise Osti said the brand is “really focused,” and touted Tristate Holdings’s industrial expertise among the key assets. “We were part of a distributing company before, while now it’s an industrial one. We have our own premises, our R&D laboratories and this is essential for C.P. Company,” Osti contended, recalling one of the first employees his father and company’s founder hired was a chemist. “The brand has experienced a favorable moment but without the support of Tristate Holdings we would have hardly reached these goals,” he added.

Although Tristate Holdings Ltd., which is listed on the Hong Kong stock exchange does not disclose sales figures for its brands, Osti said C.P. Company has registered a 50 percent increase in revenues year-over-year since the acquisition. Osti doesn’t expect the brand to sustain the same growth, rather he sees potential in consolidating the label. “I’d be happy to see a slower but sustainable growth in the upcoming years,” he said.

The brand has also experienced a shift in its customer base, which Osti described as “the sons of the historical customers.”

In order to tap into the new audience, C.P. Company also addressed the partnerships and customization arenas. 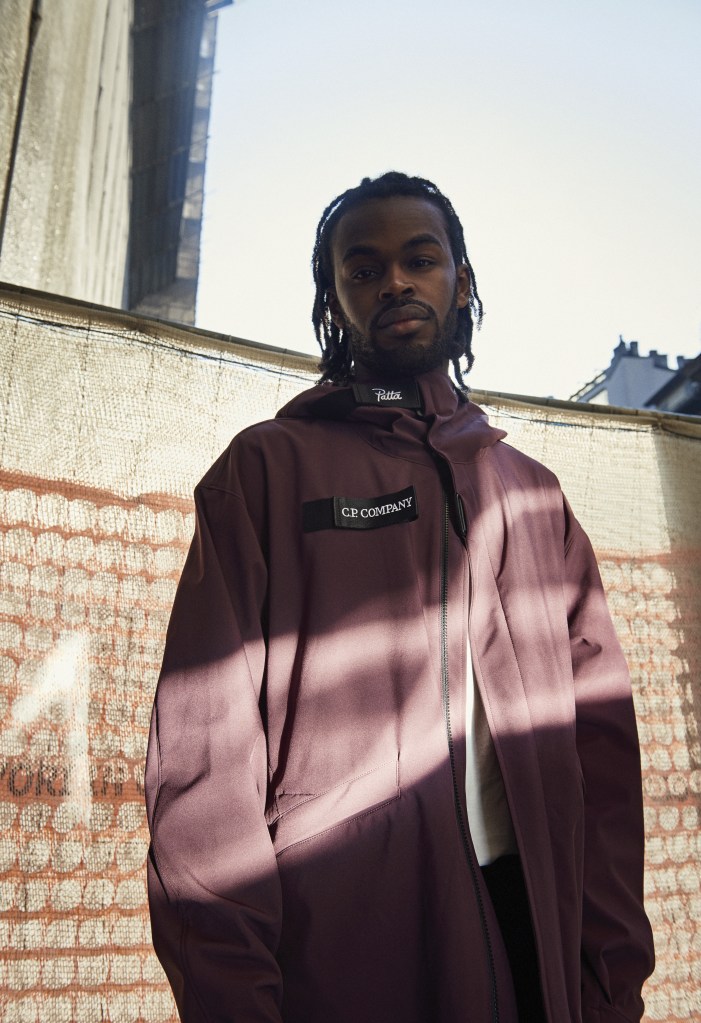 In April, the sportswear brand unveiled a capsule collection for spring 2019 in collaboration with Amsterdam-based streetwear brand Patta. The lineup includes some of the Italian brand’s signature garments updated with utilitarian and functional details that enhance the collection’s performance features, as in the suspenders added to the Google Fishtail Parka. “The project has been quite a surprise for us, proving how relevant C.P. Company is in the [streetwear] segment, which was the one we were specifically targeting,” Osti noted, adding he’s in talks for a second iteration of the collaboration.

“Collaboration are effective when they allow both brand to mutually ‘authenticate’ and get credit within segments that are not their historical ones,” he said. “They need to be meaningful and leverage both marketing assets and value.”

Catering to Millennials’ demand for customized product, the Bespoke Color project first teased last November has marked a second chapter for spring 2019, expanding the personalization service to the goggle jacket, the Light Hooded Fleece and the crewneck fleece. Available at the brand’s e-commerce site, as well as at the Milan store, the project allows clients to customize the garments with any available Pantone color. Upon choosing their favorite shade, customers will receive a fabric sample before the item goes into actual production and is delivered within two weeks and accompanied by a color-coded tag and customized goggle lenses. Each of the two annual drops comes in a limited edition of 100 pieces. 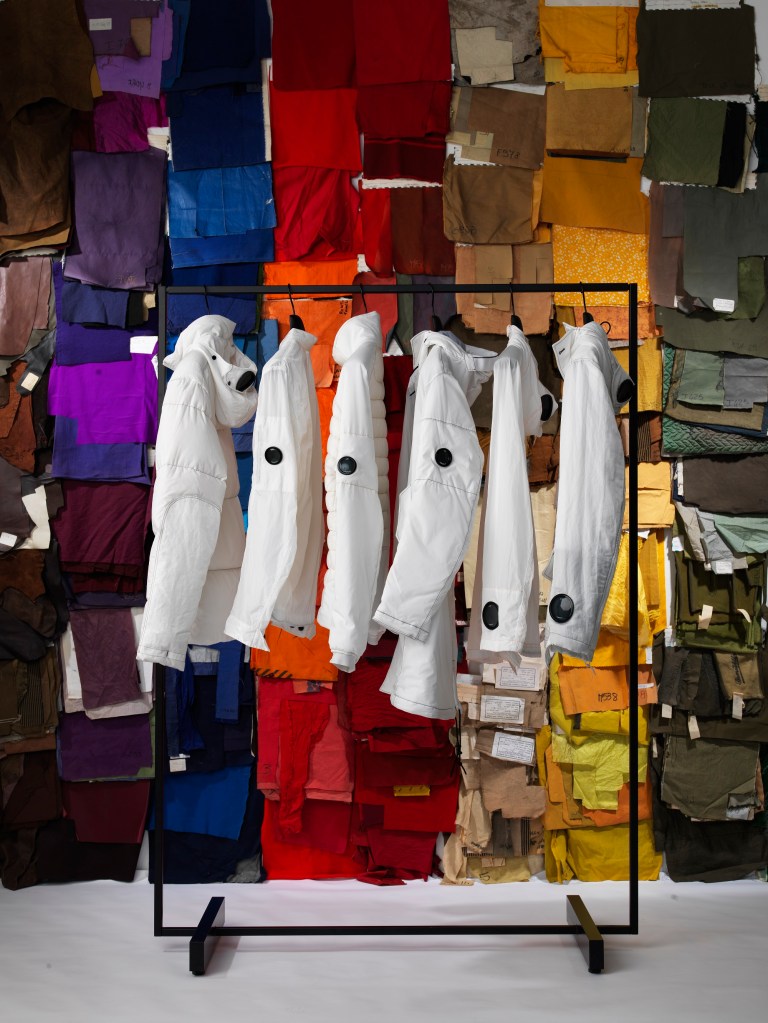 “We invented the garment-dying technique almost 50 years ago and the Bespoke project allows us to make it tangible and visible…making it accessible and understandable to everybody,” Osti said. “Homologation is an industry’s need rather than of the consumers,” he added, stressing how technology has facilitated companies to develop personalized items. Despite being successful, especially whne launched last year, Osti reprised the trial and error mindset, noting he “realized that a wide range of options often floors the customers. We need to educate our clients to this approach,” he explained.

The project was also developed in partnership with select retailers each one getting items in a dedicated color hue. They include London’s Selfridges and Harrods, 18Montrose in Glasgow, U.K., Antonia and Slam Jam in Milanm as well as Hong Kong’s K11 and Paris’ Printemps.

Italy, the U.K. and the Netherlands represent the brand’s “most mature” markets, while France, South Korea and Eastern Europe are growing although Osti noted they both have “a great potential to be further exploited.”

“The U.S. market is obviously a chimera, as it’s so important but at the same time very difficult [to penetrate]. We need to address it step by step,” Osti said adding the market has been a target for the company since the beginning. The executive showed a picture from 1991 depicting the now closed flagship at the Flatiron Building.

“Overall I feel like we’re still young, despite our 50 years’ history. Going through this revamp of the brand, with such a quick change in our customer base, I think there’s much more we can do,” Osti concluded.