The company has brought a creative director on board to further grow its brand image and boost both its online and physical channels.

Pure men’s wear players might be moving away from tailoring to tap into younger generations and the casualization trend, but digital channels offer a chance for tailors to keep up to date by addressing a more international audience and reach customers looking for perfectly crafted suits.

Such a strategy is the one behind Italy’s digital-native company Lanieri, which was established in 2013 by Simone Maggi and Riccardo Schiavotto, two engineers who sensed “a Made in Italy digital outlet was missing,” as Maggi, who serves as chief executive officer of the company, pointed out during an interview at the company’s light-filled atelier in Milan’s Brera district.

“The offering at brick-and-mortar stores was limited, as physical retail has always had an issue with stocks and with selling separates,” added Schiavotto. He explained that Lanieri’s made-to-measure model allows it to access 200 fabrics sourced from Italy’s premium textile companies located in the Biella and Veneto districts, including Loro Piana, Ermenegildo Zegna, Vitale Barberis Canonico and Reda, among others.

In 2016 the latter supplier also spearheaded a pool of Biella-based investors, which fueled the company with an injection of cash of 3 million euros, in addition to an investment of 1.5 million euros already invested in 2013.

Six years after its launch, the company can leverage a “bespoke experience intact, both on- and off-line as we’ve managed to set up a 100 percent omnichannel model,” said Maggi.

While generating a great portion of its sales online, Lanieri also counts on five ateliers in key European cities, including Milan, Turin, Rome and Bologna in Italy, Paris and Brussels. “The stores have been pivotal in our growth, which has been organic across the 2015 to 2017 period,” said Schiavotto. “It takes a while to make a business take off abroad, even a digital one like ours,” he continued. 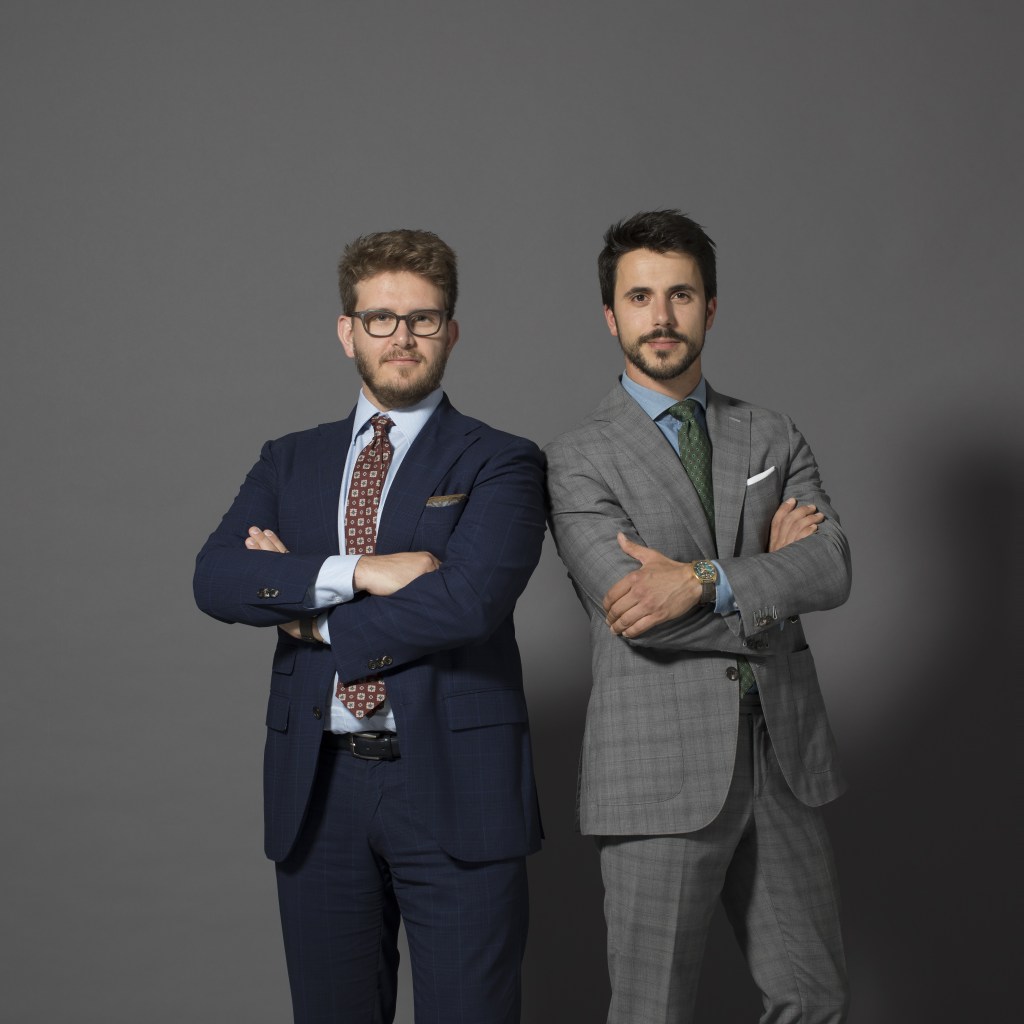 Each physical atelier is equipped with iPad devices that both help sales assistants to keep track of the client’s measurements and previous orders, and help all clients to be in touch with the label even after their visits to the stores. “Of course we’re targeting the customers who can enjoy the digital platforms, otherwise they’ll lose the experience altogether,” Maggi explained.

In keeping with its digital native mind-set the company can leverage a three-week delivery time across all channels and used an algorithm developed in-house which allows it to check that all the sizing information is correct and alert the clients and the sales assistants to potential errors.

“As opposed to traditional e-commerce platforms registering an average 40 percent of returned products, our situation is different as we have few despite our 2,000 orders per month,” said Schiavotto.

As part of their ongoing efforts to evolve Lanieri from a start-up company to an established player, the two business partners decided to bring Claudio Nobili on board, serving as the brand’s creative director. Nobili oversees the collections and communication strategy.

“We put our offline expansion on hold as we wanted to revamp the brand’s image first — we think at a certain point we were missing an internal identity. We needed someone who could reinterpret the brand’s ethos and its communication, and bring it onto the next level,” Maggi noted.

“I see a lot of international players diluting their identity, which instead needs to be safeguarded and nourished. It spans from the brand image down to the tailor or seamstress, who are both part of the heritage,” said Nobili.

For the first ad campaign conceived by Nobili for spring 2019, Lanieri chose to portray a number of young talents inside a curated selection of Milanese interiors, designed by famous architects and designers Giò Ponti and Vico Magistretti, to “offer a glimpse of the city’s and Italy’s hidden treasures,” said Nobili.

“Our goal is to create culture about clothes, but also on everything surrounding them; there’s so much more to the Italian style than obvious clichés,” he added. “Product-wise, my goal was to refresh the offering, as it previously only resonated with a very formal, traditional concept of tailoring, with flinty rules.”

The move also resonates with Lanieri’s customer base getting younger, and now including Millennials. To this end the company has also expanded its categories to include shirts first and then knitwear and casual pants.

Priced at between 475 and 1,200 euros, Lanieri’s suits and fashion pieces are shipped to 70 countries. Italy accounts for 50 percent of sales, while 30 percent of revenues are generated in other European countries, particularly France and Belgium, and 20 percent in the Rest of the World area.

Schiavotto noted the U.S. is strong online, but Lanieri is not planning a physical atelier there for the time being. Instead, in 2020, the company plans to add two new brick-and-mortar units in Milan and Paris, while also looking to other francophone cities in Europe for additional doors.

In 2018 the company generated revenues of 4 million euros in 2018, up 30 percent compared to the previous year and Maggi noted the first quarter of 2019 is also showing a spiking growth of around 35 percent year-on-year.