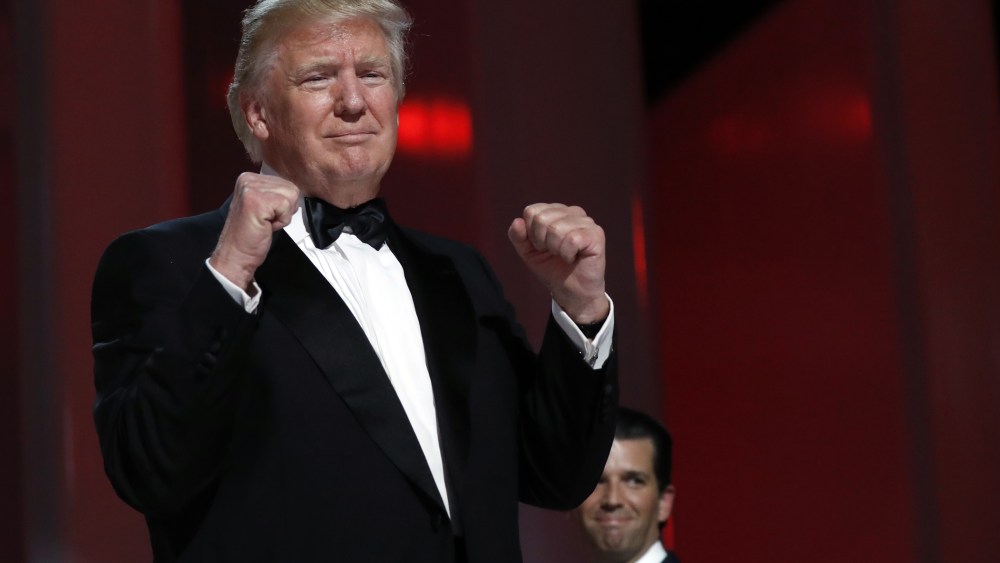 President Trump’s traditional wardrobe choices continued into the evening as he donned a conventional one-button satin peak lapel  black tuxedo for his coming out party at Washington’s inauguration balls.

Although his pants were a little too baggy, the jacket  — albeit a tad too long — fit him well and flattered his body type. And the outfit also served to complement his wife’s ivory-colored off-the-shoulder gown that she co-designed with Herve Pierre as they danced to the Paul Anka-penned My Way.

During the day when he was sworn in as the 45th president of the U.S., the commander in chief elected for a gray suit, a dark blue cashmere overcoat that was unbuttoned to reveal a starched white shirt with a tall spread collar and a very long shiny, red silk tie. The coat and the shirt are believed to be Brooks Brothers. But who made the tie and the single-breasted, two-button gray suit was anybody’s guess. A Brooks Brothers spokesman had no comment.

Trump’s conservative choice was similar to that selected by several predecessors. For his first inauguration in 2009, then-President Obama also opted for a black Brooks Brothers cashmere coat, which he wore again for today’s program, and burgundy cashmere scarf, black leather gloves and a textured red tie. For the second ceremony in 2013, Obama went with a navy suit, which was designed by Martin Greenfield, and a light blue tie to match Michelle Obama’s Thom Browne ensemble.

“I think he looks good overall,” said Joseph Abboud. “Whatever your political leanings, it’s important for the president of the U.S. to wear American. U.S. presidents are always big on red, white and blue since its emblematic of the flag. He has a presence — he’s a big guy, but his clothes fit him well. He’s very traditional, he always wears dark suits. I just hope he’s wearing American-made product.”

Nino Saviano, a Republican strategist and president of Savi Political Consulting, which is based in Washington, D.C., wasn’t surprised by Trump’s overall wardrobe decision but was a little bit taken aback by his tie.

“His tie is too long past his belt,” Saviano said. “Trump’s choice of a red tie is one that is meant to both project power and appeal to his political base, but he’s not going in for an election debate. As a newly elected president, he speaks to the entire nation on Inauguration Day. I am not sure this is the kind of image to be projected here. There is certainly a deeper meaning to the tie color and it points right to the approach he intends to bring into the White House from Day One.”

Throughout the presidential race, suits have been a controversial topic for Trump — specifically the suits in his Donald Trump Signature Collection, which was dropped by Macy’s Inc. last July. This came after Trump, during his presidential kickoff speech on June 16, said Mexican immigrants are bringing drugs and crime to the U.S. and advocated creating a wall along the U.S.-Mexican border.

“Some decisions are very difficult to make,” Macy’s chairman and chief executive officer Terry J. Lundgren told WWD at the time. “But our company’s commitment to diversity and inclusion in all facets of the business, including in our relationships with business partners, is a strong guiding force.”

Macy’s decision led Trump’s licensee partners — PVH for dress shirts and neckwear, Randa for small leather goods and Peerless Clothing for tailored clothing — to stop producing any merchandise under the Trump name. As of last November, many of the pieces from his line were deeply discounted on Amazon.

Another point of contention was the origin of his suit collection, which was made in Mexico and China — going against one of Trump’s key platform positions to bring manufacturing jobs back to the U.S.

During the Republican presidential debate last March, when pressed by Marco Rubio, Trump vowed to move the production of his collection back to the U.S.

As of now, all of his business holdings are in a trust that will be run by his adult sons.

The choice of an American brand for his inauguration outfit is a nod to his patriotism. Traditionally, he has worn Brioni suits, but went for a Made in the U.S. choice rather than an Italian.

Brooks Brothers has a long tradition of outfitting American presidents. Since its founding in 1818, the company has dressed 39 of the 44 chief executives that preceded Trump. In recent times, only Ronald Reagan, who had a personal tailor in Los Angeles, and Jimmy Carter, did not have pieces of the brand in their wardrobe.