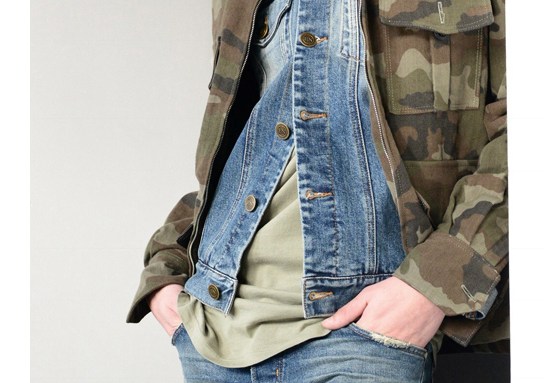 The designer launched En Noir in 2012 and gained buzz shortly after when Kanye West fully embraced Garcia’s leather joggers. Following that, Garcia went on to produce four collections but took a hiatus from the brand in early 2014.

Garcia attributes the hiatus to problems on the back end and an inability to keep up with the demand. Now En Noir has a new production partner and a new collection for fall that’s less about leather and more about lifestyle dressing. Although the the brand declined to name the new partner, that company invested in the brand and will handle the sampling and production going forward.

“We’re being more calculated about it,” said Garcia, who previewed the collection from his New York showroom.

Hints of this shift away from all-black leather pieces were discernible in the brand’s spring 2015 line, but the fall assortment, which Garcia said features a slimmer fit, is visually and physically lighter. It’s also less reliant on activewear influences. Instead, Garcia has presented tailored pieces — wool topcoats and suits — along with camouflage bombers and military green parkas. There’s also a core collection of cashmere blend T-shirts and flannel button-ups. Fabrics are sourced from Italy and the clothes are made in Los Angeles.

Denim is dominant. On Christmas Eve the brand released a denim capsule collection with Barneys New York, which Garcia noted was eager for new En Noir product. The line, which is made from Japanese denim, retails from $550 for jeans to $750 for denim jackets. The styles, which Garcia said sold well, are heavily distressed and include a subtle stretch.

Garcia will continue to work on his namesake line, which he introduced last year. Garcia told WWD that in comparison to En Noir, his line, which is produced in Paris, speaks to a very specific customer. Garcia will also start to work on projects with streetwear brand Black Scale, where he was previously head designer.

En Noir will launch an e-commerce site on Thursday that will sell the collection along with exclusive releases. So far, Barneys has picked up the full collection, which ships in July, and En Noir is pushing for international business in Asia, Germany and Europe. Women’s is also in the pipeline.