Eric Lawrence is a name to watch. The Dallas native, who gained notoriety for his Anger fashion project, has unveiled his second fashion venture, Odessa 1919. The brand launches with a silver detailed update of the Nike Air Force I sneaker, which retails for $650 and is available for preorder starting today on the Odessa 1919 web site.

“I have a fascination of how opposites/dualities work together to create something new,” said Lawrence, who explained that Odessa represents the industrial Texas city where he grew up, while 1919 references the year German art school Staatliches Bauhaus was founded. “Both inspirations work together. The shoe is an example of this idea of duality — how two opposites come together to create something new.”

The idea came naturally to the young designer, who is based in New York City. “One day, I was putting silver tips on a pair of cowboy boots and I was seeing what it would look like on a sneaker. I grew up in Texas where kids went to school wearing cowboy boots. Before this, I was doing different projects under my name, but I knew at some point I wanted to start my passion project.”

Lawrence first grew interested in fashion through skateboarding, his first hobby, and said he wouldn’t skate unless he was wearing the perfect outfit. His interests grew with age through his sister, who would send him clothing as gifts. “She could tell I was interested, but I didn’t know where to start,” he said.

While living in Dallas, he would visit his sister in New York City and browse Tumblr to learn more about fashion. He said that’s how he learned about Matthew Williams, who was working on Been Trill at the time with Virgil Abloh and Heron Preston.

Lawrence met Williams at a Drake concert, after encouragement from his sister to introduce himself, and he was later offered an internship. Lawrence moved to New York City to do research for Williams, and when Williams moved to Italy for Alyx, Lawrence remained in New York City “assisting photographers, interning for different stylists, and taking classes at FIT for Photoshop and Illustrator,” he said.

The 26-year-old designer gained notoriety for his Anger T-shirt collection that was available at over 60 stores around the world and resulted in a relationship with Converse and a collaboration with Los Angeles-based label Mr. Completely. Inspired by American filmmaker and author Kenneth Anger, Lawrence printed the word “anger” on shirts and repurposed vintage New York Rangers hockey jerseys, dropping the “R” and “S.”

“I didn’t expect it to be a huge thing,” he said. He photographed his friends in the shirts and generated a buzz and following that led to a collaboration with Mr. Completely. The collection began as a T-shirt and hoodie before expanding to embroidered jeans and sweatpants. Both hockey fans and fans of filmmaker Kenneth Anger would stop Lawrence to share their delight. 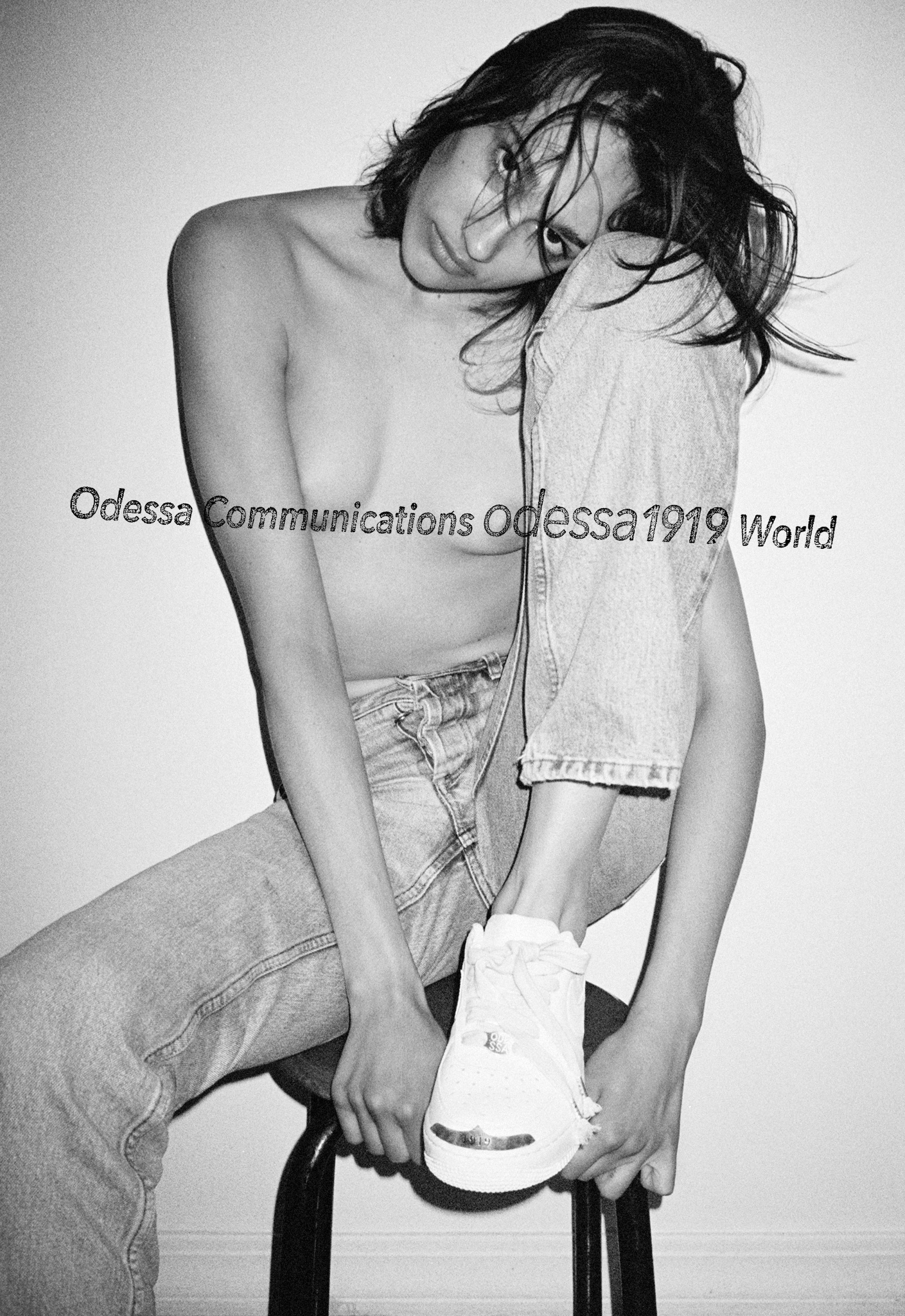 With Odessa, Lawrence plans to share his designs consistently and frequently but won’t “tease” new products. “Attention spans are so short and people just aren’t patient enough for that anymore,” he said. “If something says, ‘Coming soon,’ you’ve already forgotten about it, but if something says, ‘Buy now,’ then you’ll get it. I’m not showing things until they’re ready to be sold.”

The Odessa 1919 Silver Detailed AF1 sneakers took eight months to produce in Brooklyn and Los Angeles, and orders will take two to four weeks to process.

He decided to operate on a direct-to-consumer model, saying, “I have weird thoughts about doing retail. It moves too fast and things go on sale and are out of season in two weeks.”

He also plans to expand beyond footwear and into apparel. “Clothing is next after shoes,” he said. “I’m going to keep working with precious metals, making pieces using silver for now and get into other materials.”