Ten of the best men's collections from the fall 2016 runways. 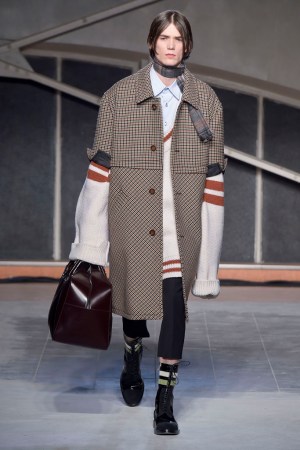 An American in Milan: 424’s Guillermo Andrade on the Future of the Brand, Streetwear

9. Alexander McQueen
Sarah Burton showcased her skills as a couturier and tailor with a lineup of refined suits and overcoats she embellished with decorative butterflies and antique sequins in paisley patterns.

7. Tim Coppens
The designer successfully moved beyond his athletic roots with a collection that embraced the key trends of the season, including elongated topcoats, utilitarian references and statement plaids.

4. Ralph Lauren
The king of traditional luxury brought a touch of the American prairie to Milan with his unique blend of Western references, the ski slope and supersharp tailoring.

3. Dries Van Noten
With the Opera Garnier as the backdrop, the Belgian designer’s model army marched out in a lineup of highly embellished uniforms with a dash of psychedelic flair.

2. Gucci
Alessandro Michele continued his trip into eccentricity and genderless fashion with his traditional bold colors and rich patterns, mixed this time with cowboy shirts and oversize jean jackets.

1. Prada
One of the most influential collections of the season, Miuccia Prada offered a new take on heritage military with a touch of retro Fifties romantic influences.