The greatest hits collection comprised of Five Four's many brands will be supported by socially distanced events in Los Angeles.

The capsule, comprised of 20 products, is considered to be a greatest hits collection of the bestsellers from each brand. There’s the New Republic tan Sonoma Chelsea boot and white Kurt leather sneaker, Grand Running Club’s asphalt everyday pant in black, French terry hoodies from Melrose Place and indigo stretch jeans by Five Four all ranging between $38 and $150 in price.

Dee Murthy, Five Four Group cofounder and CEO, said he had wanted to work with Revolve for some time and did a small test four years ago amidst the company’s rapid growth and focus on its subscription model.

“The Revolve partnership feels like the sky is the limit,” said Murthy. Five Four recently celebrated 19 years in business, and much like the rest of the fashion industry and the world, is coming out of the other side of the pandemic with a new focus. They’re producing fewer products, but connecting with their consumer more and also exploring a dedicated women’s offering. The New Republic footwear in this collection is in genderless sizes, as well as the Melrose Place knitwear.

“From a business standpoint, we were almost flat,” said Murthy. “We never worked harder than we did last year and we’re sitting here today. We were adamant about not downsizing. It also made us extremely focused on selling product people want and make huge improvements on.” 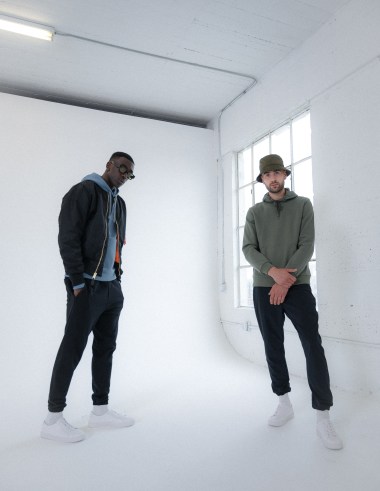 New Republic CEO Josh Kaplan added that 2021 has been more positive than the prior year already. “We’re seeing an uptick from March,” he said. “So much of our brand is about going places and so March was very positive. April was also very strong and May is off to a strong start, seeing customers buy products they were buying pre-pandemic.”

He is curious about what workwear looks like now, considering many may change their style as they head back to work. “We’ve had an incredible run in that category for a long time,” he said. “No one is back to work yet so love to see what that looks like.”

In addition to the capsule launch, Five Four and Revolve will host socially distanced events in Los Angeles for fitness, wellness and tequila tasting among other themes.