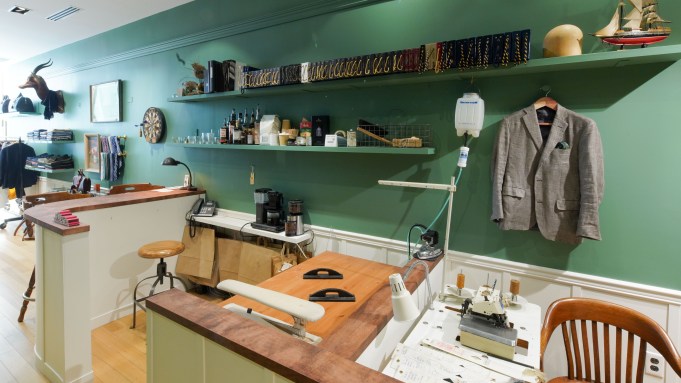 Freemans Sporting Club is heading uptown to 30 Rockefeller Center for its new storefront.

The downtown men’s shop has been a fixture of the SoHo, Bowery and Lower East Side area for more than 10 years. The FSC Midtown location will retain many of the same elements as the Rivington Street store that is closing in October, but will focus more on its tailoring service.

Designer Nikko Lencek-Inagaki said the 800-square-foot store is a fitting studio designed to similar to a “neighborhood bar” or “living room” with an on-site tailor and additional staff to provide refreshments in the store. The brand also partnered with a local coffee maker Trade Coffee to provide complimentary coffee.

“It was a good opportunity presented for us and no reason to say ‘no,’” said Lencek-Inagaki. “Part of the reason why they thought of us is because we’ve had such consistent offering in custom suiting for the year and it felt like a good fit for the area. They are rapidly coming back to work, new restaurants, there was a moment for good synergy.”

Lencek-Inagaki said the Rock Center location tries to retain a “speakeasy vibe” with an entrance inside the building lobby that will be used as a main entrance instead of the sidewalk entrance.

“Freemans is very much downtown, but our customer is not just a downtown guy,” Lencek-Inagaki said. “By and large, they didn’t live around the neighborhood. They came down to experience something different than what they usually would. It seemed like a good time to reawaken energy, breathe a bit of fresh air for ourselves.”

Lencek-Inagaki said 2020 was FSC’s move “back to its roots,” focusing primarily on custom clothing, which the designer regards as the most direct-to-consumer and most sustainable model with the least overhead. The brand also altered its website to be its own storefront.

Jack Carlson of Rowing Blazers stepped into FSC to be creative director for the brand’s spring 2021 collection, and though he started fall 2021, Lencek-Inagaki picked up where he left off.

The fall collection hitting the Rockefeller Center store in November will include four season cotton gaberdine chinos, 15 gauge merino crewneck sweaters produced on demand by producers in Brooklyn, N.Y., overshirts crafted with Italian wool and T-shirts made from cotton grown in North Carolina and dyed in Los Angeles. “It’s less of a footprint than what we’d normally have,” the designer said.

“We’ve participated in the fashion universe here and there, but we had to dial back from that because we weren’t showing collections,” he added. “We thought very carefully on how we were planning merchandising. Do we need to make more pants? How many do we have? Does it have a reason to exist for our customers? It’s been really fun to go back because it’s a thoughtful design, too.”

Though the brand is closing their Rivington Street store, they are currently searching for a new downtown location.