The made-to-measure brand is dressing a quarter of this year's draft prospects in the first virtual NBA Draft.

Tonight’s 2020 NBA Draft will be a special class for many reasons, but is most notable for being the first virtual NBA Draft.

Sixty players will be selected by the 30 NBA franchises in two rounds of selections. Projected picks Anthony Edwards, James Wiseman, Obi Toppin and LaMelo Ball are among the players to be chosen to enter the league, and of those 60, a quarter of them will be wearing Indochino suits.

For years, players attended the NBA Draft sitting at tables with family and friends and walking to the stage to wear their teams’ hats, but this cannot be done at home, where all of the prospects will be receiving the news this year. An Indochino suit is the antithesis of stereotypical COVID-19 attire like casual apparel, hoodies and sweatpants.

“I think the entire world is looking to get back to a sense of normalcy,” said Indochino president and chief executive officer Drew Green. “There are changes from the last eight months that’ll stay with us, but our clients say they want to get back to looking their best. I don’t think the draft is an inflection point of that, but it’s a return to normal in some respect.”

Brooklyn-born Toppin, who is the number-one ranked power forward in the draft and a projected top five pick, said his draft suit is his first.

“I feel better now that I have my suits,” he joked. “But for real I’m blessed to have the opportunity to be able to say I’m in the NBA draft because a lot of people dream of this moment.” 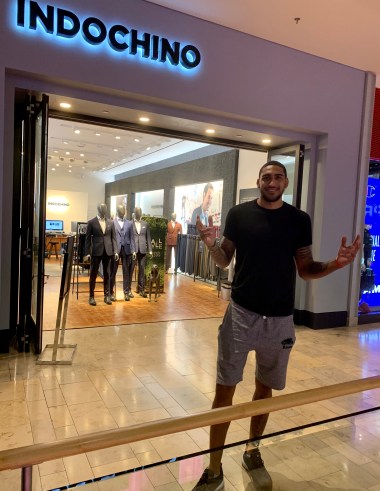 Last year, the company dressed four athletes, including RJ Barrett, whom they signed to a multiyear deal which, according to Green, was “a smashing success.”

“We had an expectation for awareness and sales and the partnership generated more awareness and buzz about the brand and his style,” Green added, and Barrett will play a “big role” in the draft again. Green did not divulge how the New York Knicks forward will be involved.

This time around, Indochino thought of not only finding the next Barrett, but decided to focus on a slew of athletes. The initial plan called for dressing 12 athletes and was later expanded to 15, which is the biggest selection for the NBA Draft.

“Having a suit and looking your best is such an important part of your first job,” Green said. “We’re so grateful because we’re part of these players’ first step in their careers and we do that with tens of thousands of people that don’t play basketball. The NBA Draft has become a special opportunity to highlight an Indochino suit or outerwear.”

Green added, “The draft also speaks to what we do perfectly, because you have guys like Wiseman who is 7 feet, 1 inch and can’t buy off the rack so he needs something fitted perfectly. Everything we make is one-of-a-kind and the players were able to create their own style and we helped them, but really each individual garment was done with a style in mind. Each pick came into one of our showrooms to get fitted for their suit.”

“Online did way better than we thought it would,” he said. “Our retail model is different and is suited for a pandemic in a way in that we hold appointments and don’t have inventory. People changed how and what they buy, but it helped us emerge as a market leader in the categories we sell into.”