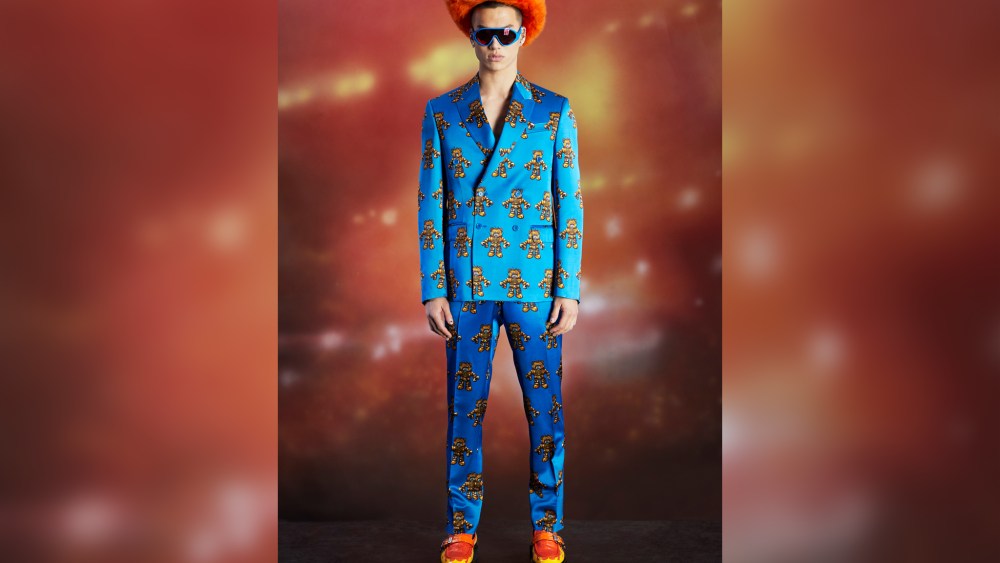 “Life is too short to wear boring clothes.”

That’s the way Jeremy Scott looks at a post-pandemic world.

The creative director of Moschino as well as his own eponymous line, will unveil his men’s pre-fall collection for the Italian luxury house today — and it’s anything but boring.

Titled Fantasy Boys, the line offers up a colorful collection that is galactic and down-to-earth at the same time. Patchwork suits were created from vintage farm jackets and juxtaposed against the dock of a space ship, and a traditional suit was emblazoned with colorful space-age prints.

“It’s a fantasy, you can be whatever you want to be, it’s space cowboy, it’s an amalgamation of so many different elements together,” Scott explained.

The designer said that since lockdowns were lifted, people are more excited about going out. “They’re putting more effort into being dressed because of being so removed from everyone for so long,” he said. “Having no reason to dress has caused such a reaction to wanting to dress so much more and express ourselves.”

While Scott’s collections may never play in the boardroom of a big investment bank, the pandemic has opened up more possibilities, he believes.

“I’ve never been that designer [you can wear to work], that was never my role in fashion. But as offices and businesses change, there are professionals who can wear my clothes.”

For him personally, the pandemic had led him to focus more inwardly. “The pandemic just heightened my style choices: it made me more insistent not to be lax about putting a personal touch on things because everything seems more ephemeral after what we’ve lived through. I didn’t want to waste a moment.”

So whether that’s donning a T-shirt with a baby tiger holding a balloon, or a double-breasted suit with an all-over print of a robot teddy bear, the message is to have some fun with modern life.

“We’re still living so much of our lives through screens,” he said. “As the proliferation of social media, especially Instagram, came about, it suited my natural aesthetic because [my designs are] very colorful and impactful on a small screen. I think that will only continue and that was also what I was thinking about with the collection: a baseball cap with devil horns. I think about the face app that people use on Instagram and it brings that false reality into real reality.”

Other personal touches in the collection include the vintage farm jacket print that he used for nylon puffy jackets and biker jackets and a Starter jacket that he blended with some kimono references and offered up in blue and white, a subtle nod to his hometown Kansas City Royals.

“I played with things I love,” he said. “I think about the things I love and what I would like to wear. It’s a bit of amalgamation of things that are more personal. I’m using myself as a muse.”

The fact that Scott did not stage a runway show for the collection also allowed him to stretch his wings a bit, he said.

“My next show will be women’s in February, so I will not be having a men’s runway show yet. At one point, I was doing four shows for Moschino and two for my own line. It’s nice to have a little bit of a breather. I’m a very conceptual designer and every show is its own world so in one way it can be very strict because there are rules. It’s like creating a film and thinking of what the character would do and how the character would dress. Without the show, I’m more liberal and open. That’s one of the charms and benefits of not doing a show.”