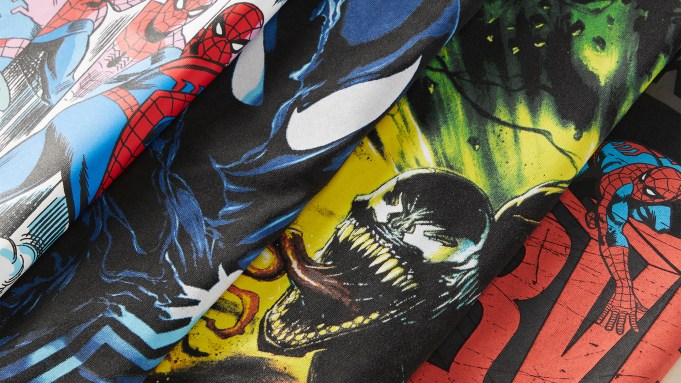 Your friendly neighborhood Spider-Man is swinging into Kith.

The New York City-based retailer has teamed with Spider-Man to kick off the Marvel superhero’s 60th anniversary with a collaboration collection for Marvel’s Beyond Amazing global marketing campaign, limited-edition custom comic book and a pop-up in Queens, N.Y., the hometown of Kith founder Ronnie Fieg and Spider-Man alter ego Peter Parker.

The collection for adults and kids launching on July 15 at select Kith stores and shops-in-shop and on the Kith website includes vintage T-shirts, 400 GSM cotton fleece hoodies, lounge sets, intarsia knit sweaters and accessories like skateboard decks, posters and puzzles, all bearing Spider-Man comic covers, logos and the world-famous web slinger with additional Marvel characters. Prices range from $10 to $220.

Ahead of the collection release, Kith on July 11 will release its limited-edition comic book at Kith stores and again on July 15 with the full collection exclusively at Kith flagships in Miami, Los Angeles, Hawaii, Paris, Tokyo, Aspen, and New York and shops-in-shop at Selfridges, Bergdorf Goodman and Hirshleifers, and will be a gift with purchase with any adult apparel in store and online.

Finally, Kith also on July 15 will open its first official Queens pop-up, commemorating the 60th anniversary collaboration. The space will be the only New York City location aside from a Bergdorf Goodman shop-in-shop to carry the collection and comic book. The pop-up will be at 221-50 Horace Harding Expressway in Oakland Gardens and will remain for three days. In addition, the brand will host a pop-up at Kith Selfridges in London.

“Kith really set the pace for the industry and we felt Kith would represent the cool DNA that they bring and the cool DNA that Peter Parker and Spider-Man brings,” said Paul Gitter, senior vice president of Marvel Consumer Products.

The retailer has an ongoing relationship with Disney, having teamed with the company on collections featuring Mickey Mouse for the 90th anniversary. This collaboration taps into Fieg’s affinity for the Spider-Man character that also kicked off his collecting.

He first began collecting Marvel cards and then comics, and the first that he purchased, which he shared on Twitter, was Spider-Man vol. 1, issue 1 that released in August 1990, and later one of his best friends gifted him Spider-Man annual edition number 1 from 1964. “That one was coveted and I kept that in a separate place,” Fieg reminisced. “Spider-Man has a special place in my collecting growing up.”

The partners turned to archival imagery and past comics for the collection. Most apparel bears the Kith logo with illustrations of Spider-Man, comic panels of the hero swinging through New York City and facing off against villains Dr. Octopus and Mysterio, and the Spider-Man logos over the years, among other styles. Other Marvel heroes like Avengers members Captain America, Iron Man, Hulk, Thor and Hawkeye also make appearances in the collection, and Iron Man makes a cameo in the special comic book coinciding with the collection.

“We wanted to come up with something relatable for kids,” Fieg said about the comic, which was written by Anthony Piper and drawn by Julian Shaw, with colors by Fabio Laporini and Fabio D’Auria. “We helped write an incredible story where Dr. Octopus heads up this army of bots both physical and in software sucking the energy out of the city. Tinker, an old villain of Spider-Man from the 1960s, is in it.”

Fieg also appears in the comic lamenting about bots ruining the city. “We incorporated a new shoe and see these incredible Easter Eggs inside of the comic book. It makes you want to read it.”

The comic and collection will be available in the pop-up that is designed like a local grocery store with a hidden door that leads into the space with the collection.

“When you show up as a pop-up that’s authentic to Kith and Marvel, we think our consumer will look at us differently,” said Gitter.

But also Miles Morales, a newer character created to carry the Spider-Man mantle, grew in popularity with the critically acclaimed animated film “Spider-Man: Into the Spider-Verse” that will be receiving two sequels in 2023 and 2024, as well as a spin-off film.

“I always go back to what’s appealing about Spider-Man,” Gitter said. “He’s authentic, relatable, somewhat aspirational and quirky and cool and he resonates with everybody. We look to partner with Kith because they bring an element of coolness for the intellectual property.”

“He’s the most relatable to everyone,” Fieg added. “He’s the most fun character out of everyone and the one that takes himself the least serious. My boys and I always felt like he was our favorite character. He’s such a unique character that’ll be relevant for every generation.”

Following this collaboration, Marvel plans to continue to celebrate the milestone anniversary with more brands and is prepping for the “Avengers” anniversary next year. Kith has more projects on the way that Fieg is not disclosing for now.

“We’re coming off of TaylorMade with this project that is more fun and relatable to the kids and I think that’s very important to our brand. As the brand continues to evolve and expand the age range of what we cater to, the more time I spend on the older side of our consumers, which makes it more surprising to make something for the left end of the spectrum as we evolve. That’s the beautiful part of what Spider-Man does. It caters to the full spectrum,” he said.