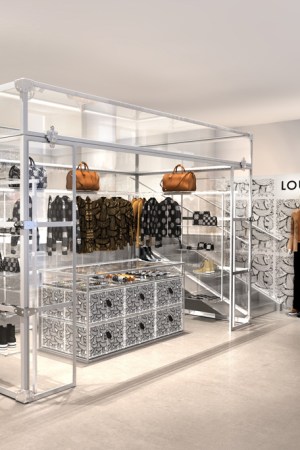 Billed as a first in Europe, Louis Vuitton is mounting a pop-up shop at Colette showcasing a fall collection done in homage to the late British designer and artist, Christopher Nemeth.

A 325-square-foot installation on the boutique’s second floor, with a trunklike shelving unit as its centerpiece, is to debut June 22 during Men’s Fashion Week in Paris and remain in place until July 18.

The collection, which spans ready-to-wear, leather goods and a range of accessories from scarves to timepieces, also goes on sale in select Vuitton stores, with a subsequent pop-up landing at Isetan in Tokyo from Aug. 26 to Sept. 16.

According to Vuitton, apparel will be showcased in 99 Vuitton locations, leather goods in 157 boutiques and shoes in 178 units.

Disclosing details of the operation exclusively to WWD, Kim Jones, artistic director of Vuitton men’s wear, noted that a young Louis Vuitton apprenticed in the building that houses Colette, a destination concept store on the Rue du Faubourg Saint-Honoré, home to many trunk makers in the 19th century. Today, it is one of Paris’ most vibrant and in-demand fashion thoroughfares.

Vuitton, which does not wholesale, rarely showcases its product outside its own network of stores. Colette is to carry a wide selection of the runway collection, which featured Nemeth’s fetish hand-drawn rope motif on outerwear, tailoring, scarves, monogram tote bags and DJ cases upholstered in shearling.

An avid collector of Nemeth’s Harajuku-inspired silhouettes, considered a precursor to deconstruction in the early Eighties, Jones updated heritage prints and silhouettes using new textiles and techniques, grafting textile motifs in cork and paper onto sweatshirts and jeans-style jackets, for example.