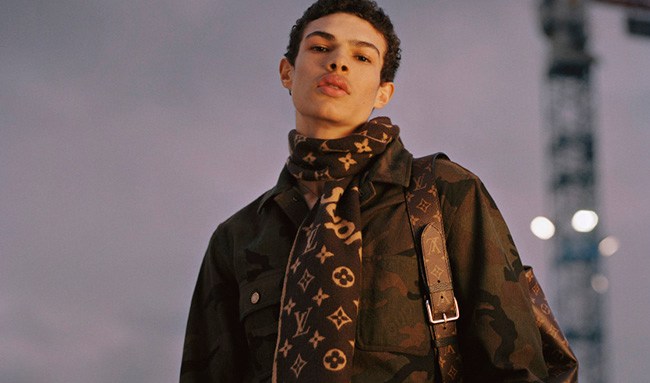 PARIS — Louis Vuitton and Supreme are making it official.

The French luxury house will unveil its widely anticipated collaboration with the cult New York skatewear brand at its men’s fall runway show in Paris today.

In an exclusive preview, Kim Jones, men’s artistic director at Vuitton, explained how the partnership came about. He said his men’s collection, which features co-branded items ranging from denim and camouflage jackets to three styles of handbags, was inspired by New York.

“You can’t have the conversation of New York men’s wear without Supreme right now, because it’s such a massive global phenomenon,” said Jones, who has known the brand founded by James Jebbia since it was launched in the Nineties.

“I used to work when I was at college unpacking boxes of Supreme at a company in London that distributed it when it was just starting out, so it’s something I’ve known all along in my life. I just feel that the strength of their graphic versus the strength of the Louis Vuitton graphic, and that kind of Pop Art feeling — it works together perfectly,” he added.

Supreme is famous for its collaborations, but until now the only Louis Vuitton logos seen on its products were the unauthorized kind. The French fashion house’s lawyers sent Supreme a cease-and-desist letter in 2000 after it used a Vuitton-like monogram print and color patterns on its skateboards.

When rumors of the collaboration emerged last month, social media went into overdrive. The speculation was fanned in part by Jones himself, who posted and then removed an image of a light gray Vuitton monogram canvas adorned with a Supreme holographic smiley sticker.

That look was nowhere in sight on Wednesday at the company’s headquarters overlooking the Seine river.

There are six styles of handbags in the collection, including a backpack, holdall, messenger bag and fanny pack. They come in three materials: red Epi leather, black Epi leather and a camouflage fabric woven through with the Supreme logo and the Vuitton monogram. Aside from being a Supreme staple, the camouflage nods to another New York icon, artist Andy Warhol.

Supreme’s red-and-white box logo features prominently on the red version alongside smaller white LV initials. The two are printed in black on the dark versions of the bags. The camouflage version is more unexpected, with the Supreme logo sitting alone on a tan leather patch and only strap details like yellow stitching and red edges to identify the product as a Vuitton bag.

The house has even produced a red-and-white monogram skateboard with a bespoke trunk and matching tool kit. “We thought it was quite nice to do it properly,” Jones said, in a wry reference to the earlier fake. “I think it’s very smart of Vuitton, because loads of brands run away from things, but there is that pop element at Vuitton.”

He noted that Marc Jacobs was the first to take this irreverent approach by asking graffiti artist Stephen Sprouse to deface the monogram. Jacobs also introduced a denim version of the motif, which inspired the jean jackets in the collaboration with Supreme.

It’s the most visible sign yet of how streetwear brands are challenging the dominance of luxury brands in the hearts and minds of younger consumers. By tying up on limited editions with brands including Comme des Garçons shirt, Aquascutum, Undercover and Nike, Supreme has attracted a fanatical following.

Jones said joining forces was the logical response. Vuitton didn’t need convincing — in fact, it was Michael Burke, the chairman and chief executive officer of the house, who came up with the idea, he revealed.

“It’s just forward-thinking. People don’t really expect those sorts of things and I think that’s what’s nice,” Jones said. “Actually, I think it’s the modern thing to do. Everyone’s talking about it and no one’s doing it, and we’re doing it.”

He noted that his earlier collaboration with Japanese designer Hiroshi Fujiwara’s label Fragment Design drew 4,500 people when it launched with a pop-up shop at Isetan in Tokyo in the summer.

“Youth is key now, especially in China,” said the designer. “I was in Beijing a week ago. We had a launch of a store and from the time I went last time three years ago, the customer’s completely changed. They used to be old men, now it’s young twentysomethings, so it’s important to make them excited.”

Jones said the line designed with Supreme would go on sale at select Vuitton stores on July 17, but would probably also be available in temporary locations. “We’ll probably make separate stores in areas where both of them are popular,” he said.