After being discovered on Instagram, gay couple John Tuite and Carlos Santolalla are more than just models — they also double as DJs. 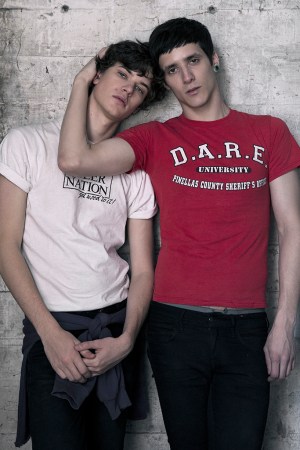 After being discovered on Instagram, gay couple John Tuite and Carlos Santolalla are more than just models — they also double as DJs. Here, they discuss their time in the industry, being gay and their dream job.

When you started working together, how were you perceived by the industry?
Carlos Santolalla: We had just dropped both of our agencies, because we didn’t want to do it anymore, but then we got approached by DKNY to do their show and campaign, and via this route we started getting more and more jobs as a couple. There were so many opportunities coming our way, so we made the decision to sign as a couple with Fusion Models.

Do you feel other male models alienate you because you’re gay?
John Tuite: One time we were with a group of friends that I had met in Tokyo, and there was this male Italian model who was very up-and-coming at the time. We were all watching TV and I grabbed Carlos’ leg and the guy stood up and walked out of the room.

Do you find modeling to be fulfilling?
C.S.: It’s definitely a platform. But we’d rather be role models to other gay kids and teenagers because I didn’t have that growing up.

Is there a highlight moment in your career?
J.T.: I went to Europe for one season; it was crazy out there, you wait at castings for about three hours and you have 10 castings a day, it was hard and a bit discouraging but then out of nowhere I got cast in the Dsquared2 show. Their team was so fun, I arrived with my nails painted black and they were all excited about my style, and I loved their attitude because most people in the fashion industry have bad attitudes.

C.S.: My first shoot was with Nicola Formichetti for Vogue Homme Japan. As a model my goal was to be in Vogue, and since that was my first job, I thought: “Wow, I already peaked, I’ve made it.”

If you could land your dream job as a couple, what would it be?
C.S.: It would be cool to do a Saint Laurent ad campaign and a Supreme ad campaign, because we want to be the face of those brands. Supreme is very straight in my view, but if anyone ever wanted to appeal to gay culture, I would like them to say they could use us.

J.T.: I would also be intrigued by an Absolut vodka ad.