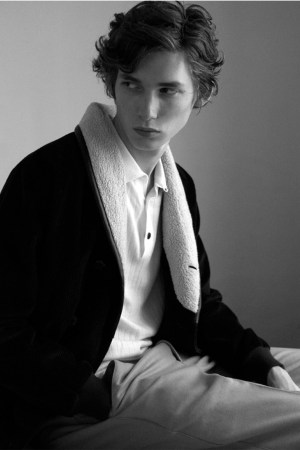 The French men’s wear label known for its straightforward, masculine styles rendered with a Parisian twist is changing its name to Editions M.R, indicating more of a focus on the craftsmanship of its ready-to-wear and bespoke services, and a further venturing into lifestyle.

“It’s a new name for the same brand. We liked Melinda Gloss in the beginning but it has become too much of an anecdote, and this could be a problem for the future development of the brand,” explained Mathieu de Ménonville, who cofounded the label with childhood friend Rémi de Laquintane in 2010. “We wanted a name that would support the message and the atmosphere of our label. The only thing that makes sense [about Melinda Gloss] is that a woman is part of a men’s universe,” he added.

“Editions,” de Ménonville noted, suggests the publication and creation of ideas that go beyond fashion. “It opens the door to other fields. We want to build a lifestyle brand with collaborations like we’ve always done. We don’t come from the world of fashion [the duo studied philosophy at the Sorbonne], we love photography, literature, and we love when fashion interacts with other cultural industries that inspire it,” he said.

In September, the duo created an online platform called Chambre 42, in homage to the iconic Paris Hotel La Louisiane in Saint-Germain, which counted Jean-Paul Sartre, Jim Morrison, Miles Davis and Ernest Hemingway among its tenants. De Ménonville and De Laquintane themselves spent several months each living there. Much like the premises, Chambre 42 is a place of cultural exchange, including video interviews with creative minds from the designers’ generation including musician Alexandre de la Baume, screenwriter Noémie Saglio and Thomas Erber, founder of Le Cabinet de Curiosités.

De Laquintane called it “a mood board of the brand.”

“Our core business has always been men’s wear,” said de Ménonville, “but the idea is to present a certain interpretation of France that we do not find today. When we started the brand we were in Shanghai, we saw all those luxury brands like Louis Vuitton and Dior coming, and we asked: ‘Is that the only image of France people have?’ Because we are French, but this is not us.”

In the last five years, Melinda Gloss staged a private movie screening for “Heaven’s Gate,” with Isabelle Huppert and director Michael Cimino in attendance, mixing fashion with cinema, which also resulted in a capsule collection sold at Colette; each year the brand proposes a limited-edition cognac with Godet, while also using its two Paris stores as an exhibition space for artists.

The name change is slated to happen gradually over a period of six months, starting on Jan. 21, when Editions M.R is to show its first fall collection in one-on-one appointments with buyers and press.

The format change largely reflects the prevailing mood among young brands today. “I think a fashion show is like an art opening with too many people in it – you miss all the good pieces,” said de Ménonville. “At a private meeting, you can ask questions, feel the fabrics, you may try something on, and enjoy the details which you would miss at a show. Also, fashion shows always come with the pressure to go a little further in terms of creation and contrast vis-à-vis the precious season, and at some point we thought, we either play the game completely and then it’s not going to be the same brand any more, or we present in a completely different way. We think it’s better to talk to 50 people in a good way than to talk to 250 in a bad way. A show is a show — it’s not a conversation. And we want to present the collection as we would to a friend.”

De Laquintane said doing spectacular garments was never the goal. “The codes of the brand are chic with a certain nonchalance and not too much sophistication. It’s a realistic wardrobe with beautiful Italian, Japanese and English fabrics that are meant to last,” he explained. “We produce everything in France and Italy,” which is rare for a contemporary label that is also steadily building its bespoke business, he argued. “Bespoke,” he noted, “is going very well, although we have kept it word-of-mouth. We are looking to hire someone to help us at [our] two stand-alone stores in Paris, where we offer a made-to-measure suit made in France from 900 euros [or $984] onwards.”

The label’s ready-to-wear business is growing double digits, fueled by Japan and Korea, its largest markets. The U.S. and online are growing the fastest. “The online store is [nearly equal] the sales of one of our stores, and it’s getting very international,” de Ménonville said without providing details.

In 2017, the label is looking to open its first store oversees, while also expanding its footprint at U.S. department stores next spring. Melinda Gloss is currently available at Ron Herman, American Rag, 10 Corso Como and Galeries Lafayette, among others.

To honor the new brand name — the M and R represent the founders’ initials — for fall 2016, the duo will revisit key pieces from the past, including its signature shawl-collared jacket, the officer-collar shirt and knitwear, which de Laquintane said he is eager to push further, deeming it ”a very attractive category for men.”

The collection will further feature a collaboration with print specialist Pierre-Louis Mascia, which is to result in homewear pieces such as pajamas, scarves and slippers.

“It’s going to be less seasonal this time because of the change, but more essential than ever,” de Ménonville said.